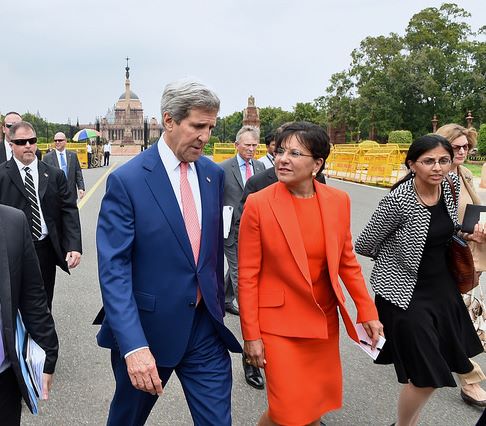 India
US Secretary of State John Kerry arrived in India on Wednesday for an annual strategic dialogue, the first with Prime Minister Narenda Modi’s new government. The purpose of the visit is to address deep differences between India and the US government before Modi’s expected visit to Washington in September. Trade, intellectual property rights, and spying are the most imminent hurdles in the dialogue. Kerry urged India to drop its opposition to global trade reforms that would ease customs rules and prove Modi’s commitment to economic liberalization, but New Delhi refuses to sign the World Trade Organization’s deal in its current form. Modi’s government demands that these reforms need be accompanied by a similar agreement allowing developing nations to subsidize and stockpile food grains. His foreign minister, Sushma Swaraj, also raised the issue of the US spying on the BJP when the latter was not in power, arguing that “friends don’t snoop on each other.” Kerry reminded her that President Obama has undertaken a unique review of all US intelligence activities, and that the two countries continue to share valuable information on counterterrorism. As the US withdraws from Afghanistan, it will be looking at South Asia with a wider strategic lens, and a greater focus on cross-border trade and regional integration.

Relevant News Stories
Kerry presses India on global trade deal as deadline looms (Reuters India)
US snooping on BJP unacceptable, Sushma tells Kerry (The Times of India)
3 Reasons for John Kerry to Be in India While the Rest of the World Burns (Wall Street Journal)

Pakistan
The Pakistani army was deployed in the capital city of Islamabad on Friday under Article 245 of the Constitution, under which the federal government mandated the military to assist the civilian law-enforcement agencies to ensure security in the city. The army will coordinate efforts with the capital administration, police, and rangers to secure sensitive areas and provide a rapid response force for the next three months. Sensitive areas include the Presidency and Prime Minister’s residence, foreign offices and missions, and Parliament and Judiciary offices. This move comes amid the military’s ongoing operation in North Waziristan. As the army intensifies its ground offensive, several analysts voice concerns about the operation becoming another military exercise that “flushes out terrorists from one enclave only to have them resurface in another.” To ensure a sustainably secure end-result, it is crucial that the civil-military leadership develop internal clarity about the scope, reach, endgame, and strategic objective to this operation writes Sherry Rehman, President of Jinnah Institute, an Islamabad-based think tank. Ending the week on a positive note, Pakistan won three medals at the Commonwealth Games in Glasgow. Qamar Abbas earned a silver medal in the 74-kg free-style wrestling match while Azhar Hussain won the bronze medal, and Shah Hussain Shah won a silver medal in the 100-kg Judo match.

Relevant News Stories
Winning our own war: 10 things to do beyond North Waziristan  (Jinnah Institute)
What defines ‘success’ in Operation Zarb-i-Azb? (Dawn)
Army deployed in Islamabad from today (The Nation)

Afghanistan
An audit process designed to determine the victor of Afghanistan’s controversial presidential election is set to resume tomorrow. The enormous task of auditing 8 million votes halted after the two candidates, Abdullah Abdullah and Ashraf Ghani, failed to agree on criteria to distinguish fraudulent votes from legitimate ones. They did, however, agree to a regulatory framework proposed by the United Nations which empowers key international observers, representatives of candidates, and UN advisors to complete the audit. President Karzai’s spokesman declared that final results must be announced by August 25. Amid the uncertainties surrounding the political process, the Taliban are reportedly scoring military gains in strategic areas around Kabul. On July 29, they assassinated Hashmat Karzai, President Hamid Karzai’s cousin and a prominent power broker from southern Afghanistan who supported Ashraf Ghani in the election. Highlighting the deteriorating security situation, a report to Congress this week warned that a significant portion of US weapons delivered to Afghan soldiers and police could fall into the hands of militants due to weak oversight.  According to the report from the Special Inspector General for Afghanistan Reconstruction John F. Sopko, the expenses of the Afghan National Security Forces are overwhelmingly higher than Afghanistan’s anticipated revenue. The forces need international donors to fill the gap in funding in order to sustain their current size and operations.

Bangladesh
The country celebrated Eid-ul-Fitr this week marking the end of Ramadan, the holiest month for Muslims. A large number of Bangladeshis travelled home from the US to celebrate the religious festival with their families. Remittances from the Bangladeshi expatriates living in the US also increased this year ahead of Eid. 14,000 Bangladeshis sent remittances amounting to $10 million just from Sonali Exchange Corporate in the US and 7,500 expatriates sent home about $4 million from Rupali Exchange. Remittances are a major contributor to the country’s economy. Bangladesh maintained its position as one of the top ten remittance recipient countries with $14 billion in remittances in 2013, according to the Migration and Development Brief by the World Bank.

Iran
Officials from the Obama administration involved in nuclear negotiations with Iran faced resistance at two congressional hearings this week. Members from both the Democratic and Republican parties asked for a vote on any final agreement with the Iranian government but administration officials seemed to indicate their disagreement on this. This exchange took place amid assurances from Wendy R. Sherman, the under-secretary of state for policy and the lead American negotiator with Iran, that the extension in negotiations and some sanctions relief was agreed by the administration “because we have seen significant progress in the negotiating room.”