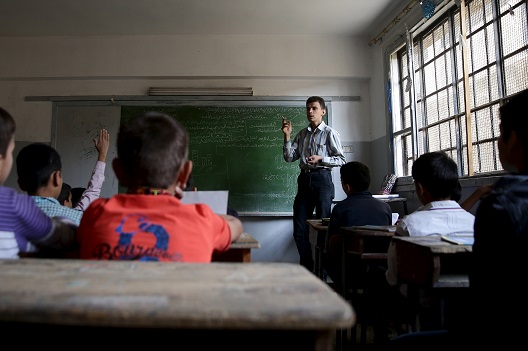 Two years after the Islamic State (ISIS) seized Raqqa and a number of areas in Syria, it successfully asserted itself and its way of thinking on most aspects of city life. ISIS’s changes encompass the social, educational, and cultural institutions. To make these changes, ISIS has at times used coercion and compulsion, and at other times enticed people through its interpretations of Islam.

The educational sector in ISIS territories is considered to have changed the most in comparison to educational curricula in other Syrian neighborhoods. The drastic change is the result of a series of decisions made by ISIS over the past two years, beginning with the creation of a bureau of education called the Diwan of Education; the name, and particularly the use of the word diwan, reflects ISIS’s attempt to redesign education in its captured territories based on its idea of the Islam’s heyday. The first of the Diwan’s tasks was to dissolve the educational and administrative cadres in Raqqa’s schools and make them take mandatory courses on Sharia. It called on them to repent and “purify their minds” to match its opinions on principles of nationalism, secularism, and democracy, which it believes are contrary to Islamic Sharia and must be corrected.

With the start of the ISIS’s first school year in Raqqa in October 2013, committees affiliated with ISIS were established. The first educational curriculum covered primary school for children aged seven to 11 years old. Pictures have surfaced of books containing the rules of Islamic manners, the fundamental concepts of tawhid (the fundamentals of Islamic doctrine), and the Arabic language. ISIS neglected subjects that had previously been taught, such as science, mathematics, art, and music.

ISIS selected educational topics for children, as written in its books and broadcasted by international channels, that focus on Islamic jurisprudence and religion, in addition to norms and manners that, according to ISIS, align with correct Islamic teachings. The main sources used are traditional Islamic books such as al-Khulāsa al-Alfiyya, written by Ibn Malik in the 13th century.

In a number of ISIS’s video clips on educating children in its territories, there is a clear focus on recreational activities that encourage children to fight and participate in jihad as a martial practice. ISIS’s interest in training children physically and teaching them to use weapons is apparent in some of the clips.

According to Ahmed, a middle school teacher who left Raqqa in 2014 and currently lives in Turkey, “The curricula used for middle school is the complete opposite of what we used to teach.” He clarifies by adding, “They have removed any mention of nationalism and the Syrian Arab Republic, replacing it with the Islamic State. They have also removed all school pictures of children that reflect gender mixing, prohibit us from teaching music, and largely neglect teaching mathematics. They have removed all examples related to moneylending, democracy, or voting.”

ISIS has forbidden gender mixing among young children, separating males from females beginning with grade one, and has declared that there will be a six day school week with only Friday, not Saturday, as a vacation day.

Preparing for a New Generation

The Islamic State’s efforts at changing educational curricula have led them to adopt, at the beginning of the 2014 school year, new books for middle school children aged 12 to 15 years old. The book Kitab al-Tawhid by famous Islamic scholar Muhammad ibn Abd al-Wahhab—founder of Wahhabism —is one of the most important foundations of the Islamic State’s middle school education. Also used are materials such as the Prophet Muhammad’s hadith (sayings and traditions), Prophet Mohammed’s biography, Quranic sciences, Islamic jurisprudence, and the Islamic doctrine.

Additionally ISIS changed the internationally acknowledged mathematical symbol for adding (+), replacing it with a new symbol represented by the letter (z). The Islamic State’s reasoning is that the (+) sign indicates the cross, which is used worldwide as a symbol for Christians: using a plus sign would be imitating infidels, and is thus forbidden.

It is interesting that the Islamic State has repeatedly called on families to send their children to school, in an attempt to appear capable of governing state affairs. However, despite their calls, many families have, out of fear of bombings, refrained from sending their children. According to the Raqqa is Being Slaughtered Silently campaign that anti-ISIS activists in Raqqa with, many families have chosen to homeschool their children.

On November 25, 2014, the Islamic State reopened the doors of the University of Mosul in Iraq and renamed it the Islamic University. In Syria, it reopened al-Furat University in Deir Ezzor and Raqqa. It has recognized secondary degrees issued by the Iraqi and Syrian regimes as sufficient for students to enroll in university studies.

However, despite the Islamic State’s attempt to return matters to their previous, more stable state, many university professors refuse to teach because of fear and threats. According to a professor who fled Mosul, many working in education have decided to leave ISIS territories.

According to an announcement from ISIS’s Diwan of Education, ISIS has closed a number of university departments, including law, political science, archeology, physical education, and philosophy, as well as departments specializing in hotels and tourism, for Sharia-related reasons.

Similarly, ISIS removed lessons on democracy, culture, and general freedoms from the curricula of some departments and banned the study of novels and plays in foreign language departments. It has banned professors from posing questions related to moneylending and interest, nationalistic or racial principles, and historical facts it considers fabricated. It has denied the geographic division of countries, claiming that they are an imperialistic invention and that all Islamic countries are one.

Given the Islamic State’s need for medical experts, its Diwan of Education opened a faculty of medicine in Raqqa. After three years in the university, students obtain a medical degree and are allowed to practice medicine in health centers and hospitals throughout ISIS territories.

ISIS has been strict about separating female students from teachers. It has subjected all teachers in the educational field to its Sharia courses in order for them to understand and spread ISIS ideology. It has threatened to fire and punish anyone who opposes it, and has imposed monetary fines on teachers for giving private classes in their homes.

According to Raqqa is Being Slaughtered Silently, teachers’ salaries range between 50 and 60 silver dirhams per month, which is equal to between 75 and 90 American dollars. Realistically, this is only enough for one family’s monthly bread supply, since the price of a kilogram of bread in Raqqa is 210 Syrian liras, or about 0.75 American dollars.

As has been previously made clear, ISIS seeks to build a comprehensive educational system that spreads its ideas and is ingrained among children and teenagers, so that it may benefit from recruiting them in the future. For this purpose, it uses methods of terror and enticement, which have shown rapid results by having brought hundreds of children into the ranks of its fighters.

Image: Photo: Students attend a class inside a school in a rebel-controlled area of the eastern Ghouta of Damascus, Syria October 19, 2015. REUTERS/Bassam Khabieh