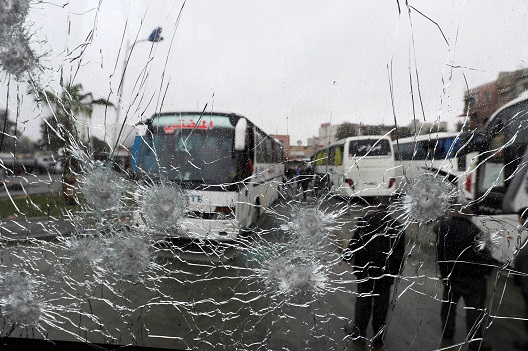 Photo: People are seen though a shattered glass window of a bus at the site of an attack by two suicide bombers in Damascus, Syria March 11, 2017. REUTERS/Omar Sanadiki

March 15 marks the anniversary of Syria’s war—a war that has changed the world. In light of this, Rafik Hariri Center senior fellow Faysal Itani conducts an interview with former Ambassador Frederic C. Hof on how the war has impacted the region and broader international community, with a specific look at how the United States’ position has changed globally as a result of the war. The transcript and audio files are below.

Faysal Itani: March 15 marks the sixth anniversary of the Syrian civil war. My name is Faysal Itani, I’m a senior fellow at the Atlantic Council’s Rafik Hariri Center for the Middle East, and we’re joined today by Ambassador Fred Hof, who will discuss with us Syria’s civil war and how it has actually impacted the wider world as we enter the seventh year of the war. Ambassador Hof, let’s start with a question on the regional dynamics. First, how has the Syrian civil war impacted the US’ traditional allies such as Israel, Jordan, Saudi Arabia, Turkey, especially in light of the changing role that Iran has played in recent years with its intervention in Syria on the ground?

Frederic C. Hof: I think that the primary effect has been one of doing serious damage to American bilateral relations with various longstanding partners in the region. I think this has been partly a function of the policies themselves, and partially a result of our inability to consult effectively with allies and partners in the region. I think for President Obama, the top priority in the Middle East, at the time when the Syrian crisis was bubbling over, was arriving at a nuclear agreement with Iran. I think for the president; this was the most practical thing he thought he could do in the Middle East. He also thought it would most effectively represent his legacy in the Middle East. The price paid in Syria for that agreement was prohibitive. I think the president understood fully how important the regime of Bashar al-Assad was to Iran, given Assad’s full support of Hezbollah, and I think it was essentially a desire not to alienate Iran, both before and after the nuclear agreement, that led the president of the United States to decide, quite disastrously in my view, to do nothing to protect Syrian civilians from mass homicide and collective punishment.

FI: So, you view the alliance situation, Iran’s posture, our concern about the nuclear deal, as all interconnected?

FH: I believe it is all part of the mix, yes.

FI: Moving on from there. Let me ask you, Ambassador, with respect to the rise of ISIS and the refugee crisis, and the terrorist attacks that have affected Europe, how do you think this has affected our European allies, both in their outlook towards us and towards their role in the region as well, and their domestic politics, as we’re talking about the impact of the war?

FH: Well, again, not to put too fine a point on it, I think the overall impact of the Syrian crisis and the way the US has reacted to it has been catastrophic, in terms of the interests of our allies. The combination of the Assad regime’s deliberate collective punishment, mass terror, and ISIS’s mass terror taking place independently in a different part of the country, has produced a massive displacement of the Syrian population: more than half of the population has been displaced from its homes. In 2015, there was a massive migration into Europe, some two thirds of which, perhaps a million people overall, two thirds of it coming from Syria. This roiled European politics, it contributed to the Brexit vote in the UK, and it continues to contribute to the way that European politics are playing out and it continues to enable Russia to intervene in those domestic politics. So, I think that overall, the failure of the US to take steps to protect civilians inside Syria – steps were taken against ISIS, but not against Assad – failure to take steps has led to catastrophic geopolitical results.

FI: Let me ask you a question about Russia, since you mentioned it: How do you feel the war has affected their global posture vis-à-vis the US and in the region? What do you see as the long-term implications of that in the context of the war in Syria?

FH: I think Russian President Vladimir Putin watched and learned a lot from American action, or perhaps more accurately, inaction, in Syria. When he saw the massive disconnect between what the Obama administration was willing to say about war crimes and crimes against humanity being committed by Bashar al-Assad and his agents, and what the US was actually willing to do about it, when he saw that massive gap I’m afraid he sensed opportunity. I think for example the red line incident – in 2013, when the US backed away from retaliation after what was really the twelfth or thirteenth crossing of a presidential red line on chemical weapons – I suspect that that incident may have helped President Putin come to the conclusion that he could take Crimea, he could pressure Ukraine, he could harass American NATO allies militarily, he could intervene militarily in Syria, and with impunity he could interfere with Western politics. I think these were all conclusions drawn by Russia. For Mr. Putin, supporting Bashar al-Assad in Syria has paid major dividends. In a country like Russia where there are grievances against malpractice in government, a poorly performing economy; being able to say ‘we defeated the US in Syria, we defeated a regime change attempt, we are back as a great power,’ for Mr. Putin this was all very very important.

FI: Let’s zoom out a bit. The landscape is as follows: We have a jihadi group controlling territory, and therefore able to execute attacks outside the country, in the territory controlled by our allies, including Europe, possibly the US as well. You have millions of people displaced, you have an empowered Russia, in the global sense, and an Iran that is in a complicated situation but has managed to secure its basic goals. But we also have a new administration in Washington. Do we stay on the same trajectory, do we have a choice, and if we do have a choice what would you recommend that choice be?

FH: I think that to the extent our president has said anything at all about Syria, either as a candidate or now as president, what he has emphasized is his interest in seeing if there is some kind of common ground with Russia in Syria. He has also emphasized, as the Obama administration did, the absolute priority of defeating ISIS, defeating Da’esh, first. As the new administration considers what to do it really has to take into account the extent to which cooperation with Russia and for that matter that Assad regime is tantamount to cooperating with Iran. And another central point the President has made both as a candidate and as Commander in Chief is that Iranian aggression in the Middle East should be pushed back. This is a real dilemma. I have no doubt that the top priority is to defeat ISIS, I think this is extraordinarily important. ISIS has, from Syria planned and executed massive atrocity attacks in Europe and in Turkey. This group needs to be put out of business forthwith. A key question though is going to be who is going to rule, who is going to administer areas that are liberated from ISIS. If the Assad regime is invited back in to resume its rule of those territories, I think this would only complicate the geopolitical disaster we’ve already bought for ourselves in Syria, because it would set the stage for successive waves of violence in response to violent governance.

FI: I think that’s a good note to wrap up on, because you’ve highlighted how things that have happened at a local, parochial level in Syria, in a town or a village, very local governance, can have these profound implications. Thank you very much for your time.