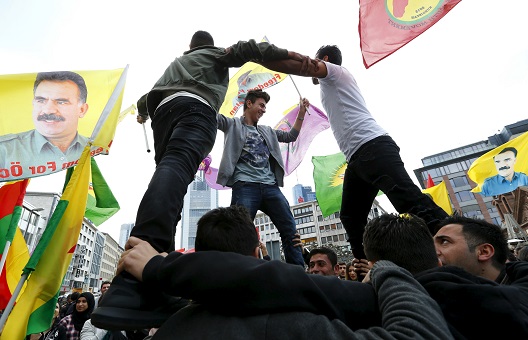 Young Syrian Kurds launched a new initiative on April 1 to give voice to the Kurdish youth who demand a unified Kurdish position amongst political movements in Syria. Those in charge of the initiative said, “This initiative is not a movement, a political party, or a new organization. And it will not become one. The only mission is to coordinate and organize activities within the initiative’s framework.”

This initiative is a result of increasing frustration amongst Kurdish youth: Kurdish political parties have failed to reach any kind of political consensus. Syrian opposition members are making statements against the Kurds after Syrian Democratic Forces (SDF) attacked opposition forces and declared a federal system of government in northern Syria (what Kurds call Rojava). The opposition refuses to have Kurdish representatives from the SDF or its political wing, the Council of Democratic Syria. Most recently, Staffan de Mistura’s document of basic principles for a political solution did not meet the nationalistic aspirations of Kurds in Syria.

Organizers of the youth initiative are demanding that all Syrian Kurdish parties end their political differences and reach a single political stance. The need for a unified position stems most recently from the absence of Kurdish issues, and in particular the establishment of their autonomous region, from de Mistura’s document. The initiative’s founders stress the need for a single independent Kurdish delegation in the negotiations to represent what they call western Kurdistan, a reference to the Kurdish controlled territories in northern Syrian.

After its launch in the first week of April, the initiative carried out its initial activities on social media pages. Tens of thousands of Kurdish-unity-in-Syria aspirants joined the social media pages in less than a week, even as many Kurdish youth feared of the initiative would fail due to some members’ political inclinations or belonging to different Kurdish political parties.

The youth are already facing initial challenges, even as simple as the fact that the organizers lack sufficient experience and resources. One of the leading founders and contributors withdrew from the initiative due to pressures from certain parties that he refused to disclose.

What is hopeful to the Kurdish youth is that this initiative did not start with political figures planning behind closed doors as is usually the case when a Kurdish party is formed. It was the idea of youth who want to unify the Kurdish parties’ position in Syria, according to initiative’s Facebook page.

However, the initiative’s objectives are not clear except for the demand to unify the Kurdish parties in Syria. Without clarifying and developing their goals, the initiative will struggle to influence the Kurdish parties. Nonetheless, they were able pull on what they call a unique, shared sense of nationalism, to stage demonstrations in a number of European capitals.

Although there is no real opposition to the initiative, some Syrian Kurdish activists and writers previously organized a similar initiative under the name of “Ava,” which also calls for unifying the Kurdish political platform inside Syria. However, this newer initiative accused Ava of having “specific political party agendas.” The existence of Ava points to another challenge: the existence of other youth initiatives. As such, this new initiative will have to establish its place, and prove its value and importance.

In conjunction with the demonstrations in Erbil and some European cities in Germany, Austria, Netherlands, and Denmark, Syrian Kurdish parties welcomed the group’s activities, such as Kurdish National Alliance and Kurdish Democratic Unity Party of Syria (PYDKS), the latter which is a member of the Kurdish National Council (KNC). PYDKS said in a press statement, “We in the European organization of the Kurdish Democratic Unity Party of Syria, back and support the initiative of these young men and women. We echo their call, and we invite all our Kurdish community sons and daughters in the European continent to actively take part in this initiative in order to unify efforts and decisions.”

Aldar Khalil, who is a member of the Kurdistan Workers Party (PKK), a US and Turkey designated terrorist organization, and a member of the Democratic Society Movement (TEV-DEV), which is the PYD dominated political entity running Kurdish areas in Syria, also voiced his support for the movement. He wrote an article published in Ronahi, in which he said, “These youth represent the future, and they should expose conspiracy and derogation of the Kurdish will. Respecting their effort is a national duty.” He added, “These youth seek to expand Kurdish ranks and return to the true national path. We salute them.”

Organizers of the initiative are trying to maintain its independence and avoid supporting one Kurdish party against another. This is critical because the two major Kurdish parties in Syria are going through crises. The KNC, which was part of the opposition’s Syrian National Coalition (SNC), failed to achieve Kurdish goals within SNC. In the meantime, the autonomous administration in the Kurdish areas is dominated by the PYD, which has not partnered with other parties in ruling Kurdish areas in Syria.

Jiwan Soz is a Kurdish Syrian journalist who writes for several Arab newspapers and agencies, including al-Quds al-Arabi and al-Jazeera.