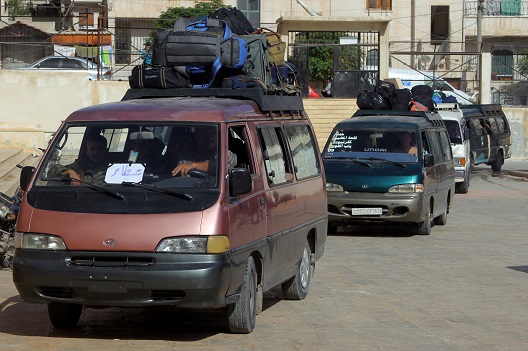 Photo: Opposition fighters and their families, who were evacuated under a deal with the government from the two opposition-held towns of Qudsaya and Al-Hameh on the northern outskirts of Damascus, arrive in buses to Idlib, Syria. Picture taken October 14, 2016. Taken by Ammar Abdullah.

Local agreements between the Syrian regime and opposition forces may have lessened the violence, but they have not ended the suffering of Syrians. Such deals, in which the regime uses bombing and blockades to force the opposition to surrender, have moved many Syrians from their towns in the Damascus hinterland towards rural Idlib, where they face new challenges: overcrowding caused by the arrival of thousands of displaced, an area with few work opportunities, and a political environment that is different to what residents had been used to in the south, as Hay’at Tahrir al-Sham (HTS) is the strongest power in Idlib.

Maher is one of these displaced people. He ended his journey in rural Idlib after leaving the Damascus countryside under an evacuation deal with the Syrian regime. “From the Damascus countryside to Idlib is a long journey, with many troubles and hardships in that green bus that took us away from our beloved town, by force, not by our will, as we had rejected reconciliation, normalization, and a return to the bosom of the nation.”

The young man arrived at the start of the year with other displaced people from his area, Qalaat al-Madiq. They then were transferred to the temporary Sa’id aid camp in northern Idlib. “We were received by humanitarian agencies working in northern Syria. After they had given us some temporary tents and meals, I left the camp with my activist and media friends who had come with me from rural Damascus,” he said. “We headed to Idlib city, where we found a house to rent at a decent price because there was so much bombing and so few people wanted to stay in the area.”

The series of evacuations from the Damascus basin began with the expulsion of thousands of people from Darayya last August and continued with similar operations in Qudsaya and al-Hameh, Moadamiyeh, Khan al-Sheikh, al-Tal, Wadi Barada, and eastern parts of the capital, as well as the so-called “four towns” deal, under which the residents of Kafraya and Fuaa in rural Idlib were evacuated in exchange for the emptying of Madaya and Zabadani in the Damascus hinterland.

People from Damascus have faced many difficulties in Idlib province due to the huge change in their situation. Opposition-held areas around the capital have suffered from siege and had no neighbor like Turkey supporting them. They had no access to the international organizations operating in the Idlib and Aleppo countryside. When the residents of certain parts of the Damascus basin were evacuated to Idlib, they saw huge differences between opposition-held areas there and those around the capital. Even the revolutionary atmosphere seemed different to them.

The people of Darayya were among the most shocked. The author met some of them in Gaziantep, Turkey. All of them were in shock, having lived for more than three years under siege then uprooted to a place filled of the black flags of extremist groups that control the area. Some Darayya residents who had reached Turkey said the revolution was stuck in a vice between extremists and the regime. According to one activist from rural Idlib, some 5,300 families from the Damascus countryside are now living in the province, distributed between Idlib city, the Sa’id camp, and the rural surroundings.

Nobody denies the hospitality of the people of Idlib towards their kin from the Damascus region, but as everywhere, there are those who have exploited the crisis by raising rents. Idlib province is now subject to a truce between regime, opposition, and Islamist groups, agreed under Russian, Turkish, and Iranian auspices at the Astana Five talks three months ago. This has largely halted the fighting. Residents and the displaced however also face the lack of electricity, high prices, and tensions due to the presence of a multitude of different factions in the region that cannot agree amongst themselves.

“We faced many difficulties feeding ourselves, as we live a long way from our town and our families,” said Maher. “We have become used to living in Idlib despite the bombing because we left our town and lived through war, bombing, and destruction. Stability is hard to find in Idlib because we don’t know what the future holds for us. Sometimes we hear that it will be like Mosul, and sometimes we hear that Syria has been partitioned and we will stay in Idlib, unable to return to our cities in the Damascus countryside.” Maher was a media activist when he lived near the capital, but in Idlib the state of media freedom is completely different.

“Life is hard, we only work in the media, and we don’t get enough of an income to make ends meet or carry on with our lives. We receive a salary sometimes from our work as photographers for agencies and outlets, but Hay’at Tahrir al-Sham, which controls Idlib, has banned photography without a specific order from the security forces and an official permit. Even this profession has been targeted by certain factions and oppositions.”

Everyone I spoke to who had been evacuated from the Damascus countryside was thinking of leaving Syria entirely, but reaching Turkey has become almost impossible given the security clampdown on the Syrian border and the huge risks along the route. On top of that, smugglers exploit and demand vast sums of money for getting people across the frontier. Once they reach Turkey, new challenges await, especially for media activists, as it is almost impossible to find work. That was the case with people from the Damascus area who reached Gaziantep late last year. They did not find jobs, so some of them went to other Turkish cities to find any job they could to make a living. Others travelled to Sudan then got smuggled into Egypt to start anew, far from the sounds of war and the stories of Syria’s regime media.

Turkey and its opposition allies are mobilizing for a battle to oust HTS from Idlib province. Families displaced from rural Damascus to Idlib province face an uncertain future as the battle approaches. They are guests in the region, which will soon see renewed fighting between the Euphrates Shield forces and HTS fighters. Uncertainty is the greatest fear. For those displaced, returning to their homes appears nearly impossible, as the regime will not accept them after it ousted them, and there is no road out of Idlib. Where will their next exile take them?