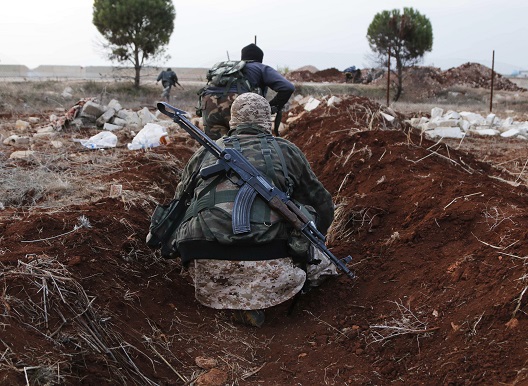 Photo: Members of Nusra Front carry their weapons as they move towards their positions near al-Zahra village, north of Aleppo city, November 25, 2014. REUTERS/Hosam Katan

There have recently been reports warning that the Nusra Front, an al-Qaeda affiliated group in Syria, is determined to declare its own Islamic emirate in Syria in the near future, but these warnings are likely jumping the gun. The argument goes that Nusra’s long term objective is establishing an Islamic emirate in Syria, but unlike the Islamic State (ISIS), they want to do so by winning the hearts and minds of the people. Two main obstacles prevent the Nusra from doing so: Nusra’s affiliation with al-Qaeda, many of whose members do not support the establishment of a caliphate, and most Syrians’ objection to the idea.

Supporting these predictions is the recent arrival of senior al-Qaeda figures to Syria, which is seen as the group’s attempt to secure enough support for the emirate by convincing other groups to join. Analysts have also interpreted al-Qaeda leader Ayman al-Zawahiri’s recent audio message as public approval for Nusra to dissociate itself from its parent organization in order to establish an emirate. Although these arguments are valuable, the Nusra Front is still facing many internal and external challenges, which prevent it from announcing its emirate. Moreover, these developments can also be understood as merely an attempt to help Nusra overcome the increased threats and the lack of support it is facing.

The Nusra Front was established in Syria in late 2011 and it gained a high profile among Syrians due to its valuable military contribution. The group made a name for itself fighting corruption and providing services, while avoiding politics and intervening in people’s lives, the combination of which gained it the support of local communities. However, in 2014, the group started to change its soft power strategy and began attacking some of the opposition groups, including those that receive US support, to eliminate any potential threat and to impose it unilateral control over the areas that will be part of its future emirate. This shift in the group’s strategy damaged Nusra’s public support and created tension with other rebel groups.

Most Syrians reject Nusra’s plan to establish an emirate, and there is no indication that they will change their position anytime soon. There is an increase in the number of demonstrations against Nusra, indicating continued public anger at Nusra’s imposed rule—any attempt to create an emirate will likely do more harm to the group’s popularity. People in Maarat al-Numan, Idlib recently demonstrated as a response to Nusra’s attack on the 13th division, a Free Syrian Army (FSA) group that receives US support. People in Attareb have demonstrated regularly against the jihadi group since Nusra defeated Haraket Hazem (another FSA, US-supported group) there in 2015.

The demonstrations against Nusra reached a new level recently. People in Kafranbel moved from only demonstrating against the group’s violations to attacking one of the group’s check points and burning it. These kind of incidents did not exist before but are now becoming more common. People know that the implementation of the Sharia law, with which Nusra has upset Syrians by starting to implement it in some areas, will become harsher as soon as the Islamic emirate is established. Thus it will likely create more anger towards Nusra and prevent the group from gaining the local support it wants for its emirate.

The military advantage that al-Nusra can provide to rebel groups in their fight against Assad will not be enough to pressure those groups to accept the Nusra’s emirate. According to Charles Lister, a senior fellow at the Middle East Institute, a Syrian Islamist told him that Syrians responded very negatively to Nusra suggesting establishing an emirate. The United States and Russia are putting rebel groups under enormous pressure to distance themselves from Nusra. Although rebel groups are cautious of publically distancing themselves from Nusra, they have accepted many agreements that clearly exclude it. The most important one was the cessation of hostilities agreement that was implemented at the end of February 2016, which excluded Nusra and ISIS. This agreement posed a threat to Nusra, because it showed that rebel groups are willing to abandon the extremist group despite its military prowess.

The resumption of fighting in Syria and breakdown of the ceasefire has allowed Nusra to improve its cooperation with other rebel groups. However, this cooperation is a tactical one and not an ideological one. Nusra needs rebel groups because they provide it with legitimacy and the support of their constituencies, which makes it more difficult to eliminate the group. Thus, the Nusra Front is at risk of losing its allies if a long term solution is reached. In this context, some experts interpreted al-Zawahiri’s audio message as reassuring rebels that al-Qaeda does not intend to unilaterally control Syria. According to the Syria analyst Sam Heller, “Zawahri’s discussion of an Islamic government seemed mostly theoretical. He was speaking broadly about the mujahedin’s ultimate aim in Syria, not issuing an urgent call for the creation of an Islamic emirate.”

The same may also explain sending senior al-Qaeda fighters to Syria to help restore Nusra’s relations with other groups. According to Lister, when Nusra was in a crisis in 2014, after ISIS was established and many of Nusra’s foreign fighters defected to join the new group, al-Qadea sent a senior leader to restore the group’s standing in Syria. These newly arrived senior leaders cannot improve Syrians’ perceptions of the group by making the rebels’ worst fears come true and establishing an emirate.

It is also worth comparing ISIS’s establishment of a caliphate to any potential Nusra attempt. The element of surprise allowed ISIS to drive out rebel groups, many of which lacked experience and were not well established, whereas the groups in western Syria are more experienced. Communities did not resist ISIS much because it initially promised services, stability, and fair treatment based on the Sharia law in an area that the Syrian government traditionally neglected. The ISIS caliphate was also established when rebel groups controlled a lot of territory, so were able to relocate to western Syria to continue the fight against Assad. Rebel groups now only control a fraction of their former territory and cannot relocate if Nusra establishes an emirate.

The establishment of ISIS’s caliphate made areas under its control safer because the Syrian regime avoided fighting it, whereas the establishment of Nusra’s emirate will make fighting it a priority. Local groups are aware of Nusra intentions and actively opposed to them, especially after seeing the results of ISIS’s experiment. Furthermore, Nusra has been popular because it works with other groups, but establishing a caliphate will likely isolate and weaken it.

There are others obstacles to a Nusra emirate. Even conservative Muslim scholars have not endorsed it, such as Syrian jihadist Scholar Abu Basir al-Tartusi. The emirate will make targeting Nusra and other groups affiliated with it a priority for Russia and the US-led coalition. Rebels who support the emirate will be excluded from any political solution, and will likely be designated as terrorist groups. Furthermore, establishing an emirate requires Nusra distance itself from al-Qaeda to gain the support of other groups, but without the parent organization it will be much weaker and unlikely to sustain itself.

Nusra’s long term goal will remain creating an emirate in Syria, but it is unlikely to realize that soon. Doing so will contradict the basis of its success in Syria until now. Nusra will continue to remain where it is strongest: woven into the opposition where can sustain its popularity through battlefield successes. Even if Nusra decides not to create its Islamic emirate soon, it will continue to be a threat to moderate Syrians and to any inclusive political settlement there.

Haid Haid is a Syrian researcher who focuses on foreign and security policy, conflict resolution, and Kurds and Islamist movements. Follow him on Twitter at @HaidHaid22.