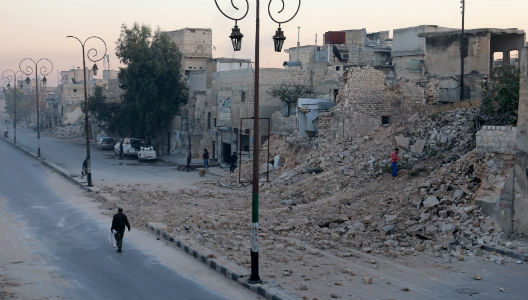 As ever, Aleppo city is a microcosm of the civil war and balance of power in Syria. Now, the rebel position there appears to be collapsing, posing an enormous risk to the insurgency’s overall military position. Many observers had expected the Aleppo battle to be extremely costly and perhaps unwinnable for the regime. While dramatic, there is nothing surprising or mysterious about any of this. The foundation for the rebel collapse in Aleppo was laid more than a year ago by Russia’s entry into the civil war and its transformative effect on the regime’s military coalition and especially on regional geopolitics.

It is true that the insurgency’s fortunes in and around Aleppo city seemed to wax and wane in the months that followed Russia’s intervention. Rebels briefly broke a regime siege on the city in August 2016, and also made significant progress in nearby Hama and Latakia provinces. The intervention itself was only one of many significant developments in the months leading up to the current rebel predicament in Aleppo. The central ones, however, are the Russian action’s secondary effects, which from the start highlighted that the insurgency and its regional backers had no answer to the new danger in the absence of some form of serious US intervention.

Russia’s most visible contribution to the regime’s war effort has been its superior firepower. This alone accounts for the speed of the rebel deterioration in east Aleppo today. Insurgents and civilians alike have repeatedly highlighted the qualitatively different destructive power of Russian as compared to regime bombings—images from targeted areas in Aleppo city confirm as much. Yet superior firepower alone cannot account for all of the regime’s crucial gains in 2016. The Russian intervention presented new opportunities to its allies and dramatically reshaped the calculations of regional actors. These second-order effects of the Russian intervention were arguably the most important in bringing the insurgents to near-defeat in Aleppo city today.

For example, the Russian intervention relieved some pressure on the regime in core geographies, allowing it and its allies—namely Iran and loyalist militias—to regroup, grow their numbers, and seize the initiative, including by focusing on Aleppo city. The first major step in that direction came four months into Russia’s involvement, when a coalition of regime, Iranian, and militia forces with Russian air support launched an operation that eventually besieged rebel-held east Aleppo. Insurgents managed to temporarily break the siege and the regime lost scores of fighters restoring it, but the episode demonstrated that even the most capable rebels were unable to hold territory against determined Russian firepower and the combination of conventional and militia regime forces.

Russia’s most critical contribution to besieging and now attacking east Aleppo, however, was reshaping the strategic calculations of Syria’s neighbors. Jordan was quick to reach out to Russia in 2015. While it is unclear what was agreed—probably a localized ceasefire near Jordan’s border aimed at stemming refugee flows—the war’s critical southern front fell conspicuously silent soon thereafter as Jordanian support for continued war on the regime probably dwindled. This relieved much of the pressure on regime forces around the capital, freeing some for redeployment to Aleppo and its surrounding provinces.

Most importantly, Russia’s stabilizing of the regime position and rapid Kurdish gains in northern Syria against the Islamic State (ISIS) and Syrian rebels—with reported Russian help—transformed Turkish strategic thinking on Syria. Turkey essentially gave up on defeating Assad and refocused on curbing Kurdish expansion in the ISIS and rebel-held countryside north and east of Aleppo city. Instead of constituting a unilateral Turkish ground operation, however, Operation Euphrates Shield drew Syrian rebels away from the anti-regime fight and redeployed them as the main ground forces against the Kurdish militia. This weakened the rebel position in east Aleppo, deepened tensions among insurgents, and decoupled the city’s fate from Turkey’s broader Syria strategy. Additionally, such a large and ambitious offensive so close to regime lines, and indeed to Aleppo city itself, certainly enjoyed Russian consent. It is difficult to read Operation Euphrates Shield as anything but a Russian-Turkish delineation of spheres of influence—one that quickly ruled out any serious Turkish-supported bid to save east Aleppo.

In the past year, this author repeatedly argued that Russia’s entry into the war was an existential danger to the insurgency. The argument was based not only on Russian firepower—formidable as it was—but also on the view that the insurgency’s members, and especially their backers, had no answer to the challenges Russia presented: military capability, a strong deterrent to escalation by others, and diplomatic leadership to regional powers seeking to contain the war (including Jordan and Turkey) amid the United States’ single-minded focus on fighting ISIS. Many who doubted the efficacy of Russia’s role cited Russian and regime incompetence and the war’s very intractability. These arguments—which track closely with the one that the regime will not take Aleppo city—focused on the pro-regime coalition’s absolute capabilities rather than the calculations and reactions of other players toward the Russian entry.

Details from east Aleppo are still murky of course, and the neighboring rebel areas may yet hold out. No doubt in the coming days, more details will emerge about why the rebels performed so poorly. There will be accusations of secret deals with the regime, cowardice, and foreign betrayals—at least some will be well-founded. The real answer, however, can be traced back to September 2015—the start of the Russian intervention. Whatever the rebels’ mistakes and the regime’s tactical improvements, Russia’s entry set in motion geopolitical and strategic developments that overwhelmed regional actors and their anti-regime proxies. Without a US-led effort to offset this imbalance, east Aleppo never stood a chance.