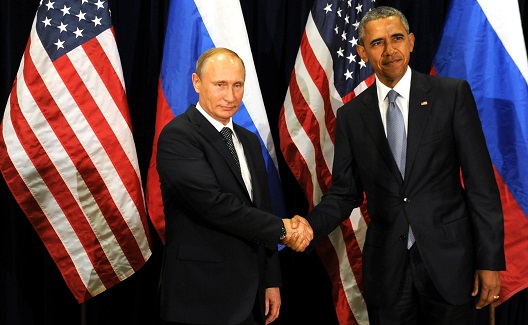 On May 20, 2016 Russian Defense Minister Sergei Shoigu proposed that the United States and Russia coordinate air strikes against Nusra Front positions in northwestern Syria. Shoigu helpfully added that his proposal had been coordinated with the Assad regime in Damascus. His initiative represents an opening shot, as it were, in Russia’s attempt to forge a military partnership between Washington and its client regime. It is an offer well worth refusing.

The presence of the al-Qaeda affiliated Nusra Front in Syria—indeed, its prominence among armed groups that (unlike the so-called Islamic State) consistently fight the Assad regime—has greatly complicated efforts to bring about a true cessation of hostilities (CoH). Along with the Islamic State (ISIS, ISIL, Daesh), the Nusra Front is neither a party to the CoH nor a beneficiary of its heretofore dubious protections. Both the Assad regime and the Russians have used the agreed ‘terrorist’ designation of the Nusra Front (a designation well earned) and its ubiquitous presence as an excuse to pound civilian residential areas and the positions of other, Syrian nationalist armed groups. It would be an achievement of some significance for Moscow to draw the US Air Force into such an undertaking.

The ultimate Russian objective is to ease Washington into an anti-terror relationship with Bashar al-Assad: the personification (from Russia’s standpoint) of a ‘state’ Moscow has pledged to rescue not only from ‘terrorism,’ but from the alleged regime-change agenda of the United States. Russian President Vladimir Putin made much of this theme at the UN General Assembly in September 2015, just before intervening militarily in Syria on Assad’s behalf. Although the actual behavior of the Obama administration toward Assad belies any official American interest in violent regime change, Putin pretends the threat is real. And administration passivity in the face of Assad regime mass homicide aided by Russia helps the Kremlin chief believe he can obtain, in the name of saving a state, that which the West has plaintively insisted is impossible: a military solution in Syria.

Secretary of State John Kerry nevertheless seeks common ground with Russia on political transition involving a non-Assad, negotiated Syrian consensus. Is common ground achievable when Moscow sees Assad as personifying a state to save, while Washington sees him as a war criminal and ISIS’s top recruiting asset in the region?

Hypothetically one could envision a superficial ‘win-win’ situation of sorts. President Obama could give his Russian counterpart what he wants: his acknowledgement that Bahar al-Assad is the recognized President of the Syrian Arab Republic (something the United States perversely recognizes anyway) and his readiness to work with Assad and Russia militarily against terrorists in Syria: starting perhaps with ISIS. President Putin could give his American counterpart what he would presumably want: his guarantee that Assad and perhaps 50 of the regime’s arch-criminals would be gone from Syria in say 90 days. Putin would get bragging rights for having defeated, in Syria, the alleged American regime change jihad. Barack Obama would get the regime gone and a transitional governing body—perhaps based in part on the existing Syrian government (as distinct from the regime)—in charge in Damascus.

A key problem with such an arrangement would be the relative likelihood of the respective ‘deliverables’ actually being delivered. The American announcement would, on its face, be a bankable concession to Moscow; the absolute bottom of a slide down a slippery slope beginning with an August 2011 “step aside” statement, accelerating through a self-inflicted ‘red line’ humiliation, and ending with not one single Syrian inside Syria being protected by anyone in the West from Assad regime mass homicide. Arguably, however, this final abasement would be worth it if Russia could deliver quickly on the removal of those most responsible for the failure of the Syrian state and the rise of ISIS on Syrian territory: The Assad family and the worst of its entourage.

Would Russia deliver? Can it? It is not as if Assad and his people are helplessly hanging around waiting to be rounded up and transported. If Putin holds his Syrian client in cold contempt and sees him only as a useful tool, the sentiment is returned in full. Assad is under no illusion that Russia came to his rescue last September because Putin sees him as a great man besieged by American-abetted barbarians. Rather Assad sees everything through the icy, Baathist optic of interests: he believes, quite accurately, that Russia wants him in the saddle strictly for Russians purposes; that if those purposes are achieved Moscow might have no further use of him. Would he and his entourage accept a comfortable exile? How comfortable would it be knowing that sooner or later full accountability will come calling? What guarantee could Moscow conceivably make to Washington concerning the removal from Syria of this loathsome crew? What guarantee could be implemented?

Assad is not without survival resources. An important asset is Iran. If Russia’s expiration date for Assad’s usefulness were in fact to coincide with an American declaration of military collaboration with him, Iran’s would likely extend far into the future. A magic number of 50 persons to go probably represents the sum total of Syrians willing to support the proposition that the president of their republic should be a peer of or a subordinate to the secretary-general of Hezbollah, Iran’s Lebanese militia. Iran knows that beyond Assad and his entourage there is no Syrian constituency for such a humiliating relationship. Is Iranian detente with Israel on the horizon? If not, the removal of this family and this entourage is not something Iran would likely facilitate.

Some Syrians have privately speculated that the recent killing of a senior Hezbollah operative in Syria was the work of Russia; that it was meant to convey to the regime and to Iran a message: when it comes to the Assad file, Moscow is in charge. The elimination of a particularly notorious mass murderer could, consistent with this particular hypothesis, have also been meant as a good faith gesture to both the United States and Israel. The hypothesis itself may be the farthest thing imaginable from ground truth, which is itself unknown to this writer. Yet it illustrates a basic point. Any Russian suggestion of readiness to escort the regime offstage after a decent interval in return for bankable concessions must be accompanied by specific examples of what is to be done and how. And specific costs must be identified and agreed to for failure to deliver.

The view here is that Moscow probably has neither the intent nor the ability to move Assad and company out of Syria. As discussed previously, leaving him inside the country—even with reduced legal authorities making him on paper the equivalent of a constitutional monarch—would warmly and enthusiastically invite continued chaos and disaster. Despite the fact that Assad is a blot on Russia’s reputation both in the region and in Europe, Putin seems completely invested in the notion that Syrians—a people completely at the mercy of heavily armed, rapacious criminals ranging from the regime, to the Nusra Front, to ISIS – must “decide.” This is why he has effectively countermanded the political transition decision of the permanent five Security Council members reached in Geneva in June 2012. This is why he tries to exempt Assad from the transition process itself.

To accept the Russian offer of joint operations against the Nusra Front would, therefore, only sharpen and lubricate the downward plunge of American credibility in Syria, in the region, in Europe, and internationally. It is an offer to be rejected.