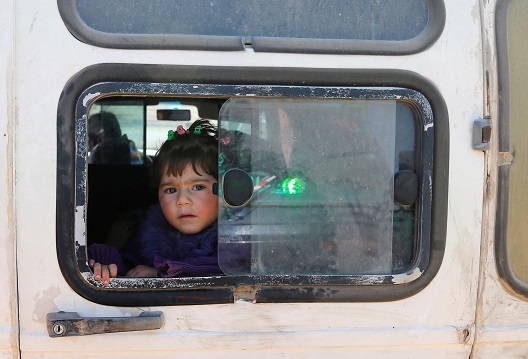 As the Syrian government and its allies extend control over a growing portion of Syria, they are accelerating demands for refugees to return to the country.

President Bashar al-Assad’s government has a political interest in refugees coming back. The government wants international legitimacy, and significant returns would signal that it has won refugees’ confidence in its ability to protect them and rebuild the country.

The UN refugee agency, UNHCR, says it cannot yet facilitate repatriations, warning that conditions are not safe. So Russia and Syria are seeking bilateral agreements to begin mass returns. This could be disastrous given that the Syrian government and its allies lack the capacity and perhaps the will to enable refugees to return safely and reintegrate into the country

Syria needs UN assistance to help manage how refugees come home. If returning Syrians are not able to find safety or maintain dignified lives, an influx of returnees could contribute to more instability and internal displacement in the country.

For the past year, our research in Jordan examined the hindrances and incentives for Syrians to go home. We sought to understand the complexities of a future Syrian repatriation program through analysis of previous programs in other countries, and interviews with Syrian refugees, humanitarian actors and policymakers in Jordan.

Almost all the Syrians we interviewed in Jordan expressed concern about safety and stability in Syria. “I am not sure if the regime will let us be free and not detain us. Maybe they will, but how can I trust them, or trust anyone?” said a refugee from rural Damascus, now living in Jordan’s Zaatari camp. “Here, [UNHCR] supports us, but who will back in Syria?”

The UNHCR has outlined its criteria to begin facilitating large-scale voluntary repatriations in cooperation with the Syrian government. They include large numbers of refugees requesting UNHCR support to return, improved conditions and legal frameworks to ensure returnees’ rights and the UN’s unhindered access to them.

COOPERATION WITH THE GOVERNMENT IS A DOUBLE-EDGED SWORD FOR UNHCR

Given the current state of UNHCR-Syrian government cooperation, their future relationship looks to be fraught with challenges. The Syrian government has imposed restrictions on UNHCR activities in Syria, leveraging its strategic consent for UNHCR’s presence and operations, as well as control over staff via visa restrictions, and selection of government-approved partners for its work. If the government limits future UNHCR and partners’ operations and access to returnees, this could leave returnees without adequate aid and exposed to more danger.

Learning From Past Returns

Is there a better model for UNHCR and Syrian government cooperation over repatriation? We looked at Iraq and Afghanistan in search of lessons for Syria. At least 4.3 million Afghan refugees have returned from Pakistan since 2002. In Iraq, 3.2 million people who were internally displaced have returned to their homes since 2014.

There are a few key differences. Both Iraq and Afghanistan carried out large-scale repatriations after political transitions occurred, whereas Assad remains in power and international demands for him to leave office have diminished. The UN had political missions in Afghanistan and Iraq whose mandated activities – including repatriation and reintegration efforts – were accountable to the UN Security Council, which is not probable in Syria.

However, the UN political missions in Afghanistan and Iraq offer a window into how UN-Syria cooperation could promote and facilitate the safe, voluntary repatriation of Syrian refugees. Here are several lessons for Syria:

The first step is building the government’s capacity to govern repatriation programs. This begins by designating a ministry or department to oversee refugee repatriation and reintegration, then training their staff. In Iraq and Afghanistan, new specialized ministries were established. The Iraqi Ministry of Refugees and Migration and the Afghan Ministry of Refugees and Repatriation designed and carried out national strategies for managing displacement in coordination with the UN Mission in Iraq (UNAMI) and UN Mission in Afghanistan (UNAMA).

Applying this model in Syria will be important for managing the various organizations and responsibilities involved in repatriation and reintegration. UNHCR, as in Iraq and Afghanistan, could help develop such a ministry, which would then serve as the primary government point of contact for UNHCR and other humanitarian actors.

Repatriation requires extensive cooperation between the country of origin, states hosting refugees and UNHCR. One model is the UNHCR-led tripartite agreement on Afghan refugee repatriation, which convened officials from Afghanistan, Pakistan and UNHCR. All three parties agreed that repatriation must be voluntary, with a clear definition of “voluntary.” They also agreed any violation of the agreement would result in UNHCR and the international community stopping support for the repatriation program.

The challenge, however, is putting this into practice. UNHCR continued participation with Pakistan on Afghan repatriation despite monitors’ accusations of Pakistan’s forced repatriations.

Syria will need legal and dispute resolution mechanisms to restore Syrians’ properties, documents and other assets left behind during the war. Many abandoned homes have been occupied by other displaced Syrians or fighters and their families. Facing a similar situation in 2008, the Iraqi government ordered the restitution of occupied homes, established a reconciliation council to arbitrate property disputes and provided financial assistance to both returnees and internally displaced people evicted from disputed homes.

However, when evicted IDPs were left homeless, UNAMI called for the cessation of evictions. In response, the UN Human Settlements Program helped the government develop a comprehensive housing policy to address the shortage of shelter for displaced families.

In Syria, the framework for property and land dispute resolution mechanisms should be developed through close collaboration between UN agencies, the Syrian government and local administrative councils. Based on the experience in Iraq, it is vital that alternative housing options and financial assistance are provided to people evicted from returnees’ properties.

In Iraq and Afghanistan, UNHCR continuously monitored returnees and their areas of return. This information was critical for UN agencies, the government and others to plan development and reconstruction projects, deliver necessary aid and shelter, and prepare for future returns.

Similarly, UNHCR actively maps the areas of origin of registered Syrian refugees. But further efforts to identify secondary options of return is important, given that many refugees will not be able to return to their original hometowns. To this end, mapping areas of intended return is an urgent necessity.

The UNHCR should consult Syrians – including IDPs, refugees and victims of the conflict – over repatriation strategy, right from the beginning and throughout the process. This could include convening representatives from refugee, IDP and local communities in Syria and in neighboring countries. Such consultations, possibly organized by civil society or humanitarian organizations, could give local communities ownership over the repatriation program and rebuild trust between communities.

Efforts to return Syrian refugees now are premature. Yet when refugees eventually return, the strength of UNHCR-Syrian cooperation will be critical for ensuring a safe, sustainable and voluntary repatriation. Preparations are rightly beginning now. They should take care to listen to refugees and build upon the lessons of the past.

Dr. Lina Kreidie is a Tobis fellow at the Ethics and Morality Center at the University of California, Irvine, and a US Fulbright scholar in Amman, Jordan.

Image: Photo: A child looks out of a window as Syrian refugees prepare to return to Syria from the Lebanese border town of Arsal, Lebanon June 28, 2018. REUTERS/Mohamed Azakir