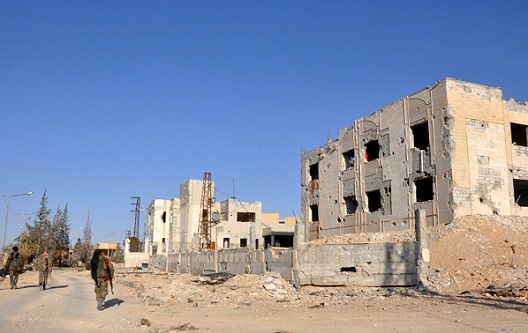 Photo: Forces loyal to Syria's President Bashar al-Assad walk in the town of al-Qaryatain, Syria, after they recaptured it in this picture provided by SANA on April 3, 2016. REUTERS/SANA/Handout via Reuters

Without minimizing for a moment those things dividing Washington and Moscow over Syria, there is at least agreement in principle on three fundamental points: all-Syrian peace negotiations in Geneva should focus on United Nations-mandated political transition leading to democracy and pluralism; that a “cessation of hostilities” in western Syria should boost these negotiations by suppressing violence; and that reduced mayhem should allow the rapid delivery of humanitarian aid to desperately needy Syrians as demanded by multiple Security Council resolutions. Yet none of this matters in the least to Bashar al-Assad. He rejects it all.

Assad rejects the very basis of peace negotiations: political transition guided by a transitional governing body negotiated by mutual consent and exercising full executive power. The fundamental terms of reference for the Geneva talks are found in the June 30, 2012 Final Communiqué of the Action Group on Syria (which featured the permanent five members of the UN Security Council). The most fundamental of those terms is political transition from the current state of affairs to a democratic and pluralistic Syria. Yet Bashar al-Assad—a person presiding over a family-based clique clinging to power through collective punishment and terror—cites the Syrian Constitution as taking priority over the expressed will of the international community. This murderous regime taking refuge in a rule of law argument featuring a constitution honored exclusively in its breach gives new meaning to obscenity.

As for the “cessation of hostilities,” Assad correctly sees it as a threat to his family, his entourage, and a system that treats Syria as private property. The reason he has spent five years concentrating lethal force on civilians is because that which he fears more than anything is the growth of civil society and self-government in Syria. To stop the air and artillery attacks against schools, hospitals, bakeries, apartment blocks, and the like is to run the risk of empowered local governance taking root. Therefore he uses the recess in Geneva talks to resume mass casualty atrocities in the Damascus suburbs. He does so with impunity, knowing that the West has protected not one single Syrian man, woman, or child from his attacks and believing that neither Moscow nor Tehran has any standing (if intention) to protest against mass murder.

With respect to desperately needed humanitarian aid, the customary pattern continues to hold: the regime blocks many deliveries and strips surgical equipment from those it permits; senior UN officials wring their hands and decry the situation; and the West efficiently recycles used talking points about mass casualty events to condemn “in the strongest possible terms” the regime’s heartless besieging of noncombatants and defiance of the Security Council. That which passes for Western leadership uses indignant rhetoric promiscuously, seemingly unaware of the self-indictment it is composing for posterity.

No one will accuse Secretary of State John Kerry of not doing his best with little or no leverage to rectify a situation for which the word appalling hardly suffices. He is trying to persuade Moscow to deliver Assad to a process that could produce a consensus, mutually agreed transitional governing body capable of uniting Syrians against the Islamic State (ISIS, ISIL, Daesh), the elimination of which remains the Obama administration’s top priority in Syria.

Kerry knows—as do the Russians—that consensus and unity are impossible with a remorseless killer clinging to power. Is it possible, from Moscow’s point of view, to sideline Assad without being seen as yielding to what it claims to be an American regime change campaign? And if Moscow can indeed reconcile itself to the straightforward unfolding of negotiations fully consistent with the mandate of the Final Communiqué, can it oblige Assad (a) to authorize good-faith peace talks, and (b) step aside when mutual consent works its will?

Ideally the United States and its partners have, by now, a solid understanding not only of Russian capabilities, but intentions. Does Assad’s defiance of the international community include Russia? Or is Russia fundamentally at peace with war crimes and crimes against humanity performed by its client? And if Moscow is not at ease with Assad’s behavior, what will it do about it? It is surely able to consult with senior Syrian security officials. It surely has the means to withhold support if regime actions offend. It has, in short, the wherewithal to signal to Syrian elites that Assad’s continued tenure is becoming an unsupportable burden to bear.

Assad, of course, believes he resides at the hub of the universe: that the Russians—like the Iranians—need him far more than he needs them; that they are supporting him for their own interests and essentially have no choice in doing so. If Western policy and intelligence officials think that Assad’s assessment reflects the actual state of affairs, does Western strategy boil down to a knowingly useless pursuit of Russia? Will Western leaders permit Assad to pound civilians with impunity? Will these same leaders not accelerate the fight against ISIS in eastern Syria? Will they continue to resist adopting a Syria strategy focusing on civilian protection in the west while killing ISIS in the east?

For the Syrian opposition options are few and unattractive. It feels bound to devote time and to behave professionally in Geneva, even as the regime soils the process. It fears that a walkout would inspire Assad—with the full support of Tehran and Moscow—to do his absolute worst in terms of targeting and terrorizing civilians. It hopes—albeit without a scintilla of faith—that the West will put its proclaimed values into action and help Syrians defend themselves against mass murder. They expect nothing good of Assad and his external backers. Sadly, they expect nothing at all of the West.

Assad may be doing what he does with the full consent of Moscow. Or he may be acting in defiance of Russian desires. Whether it is the former or the latter, a new Western strategy focused on civilian protection in western Syria and the accelerated destruction of ISIS in the east is required. Whether Assad acts in coordination with Moscow or in defiance of it, one would think the only thing that would block a new strategy would be an American objective for which Syrians and friends of the United States would pay a ruinous price: running out the clock rhetorically until noon, January 20, 2017.