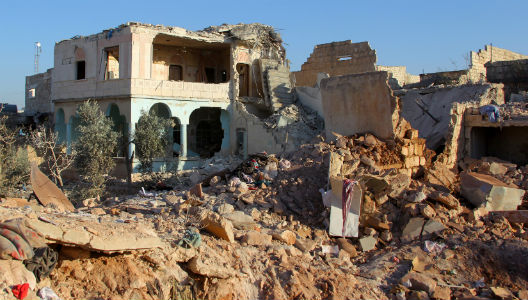 Emboldened by his troops’ advances across Syria, President Bashar al-Assad declared in July 2016 that he could retake the whole of Syria in just a “few months” if other countries withdrew their support from rebel and jihadi factions. Despite Assad’s confident appraisal, the destruction of the country’s economy will prevent him from reuniting the country and reestablishing the government’s social contract with its citizens, even if he is able to achieve a military victory.

In a Damascus salon, Assad’s cousin and the family financier Rami Makhlouf informed his audience that the regime is close to a hasim ‘askari, or decisive military victory, according to a source who attended the meeting. He was likely referring to Aleppo, which the regime and its allies have besieged and bombard regularly, forcing rebels to withdraw from three districts in the eastern side of the city.

Yet Makhlouf, Assad, and their foreign backers may find that today’s wins are tomorrow’s losses. In a recent piece, Yezid Sayigh, a senior associate at Carnegie Middle East Center, argued that “Assad will be left heading a hollowed-out state, devastated economy, and largely resentful population.”

Syria is facing a catastrophic economic situation—World Bank president Jim Yong Kim estimated the economic loss at $180 billion. At a meeting in Beirut, the United Nations Economic and Social Commission for Western Asia put this number at $200 billion, according to a source who attended the discussions. These losses trickle down to every level of the country’s infrastructure and they also impact Syria’s political and social spheres.

Citizens’ access to general services including healthcare, school, and basic utilities is limited to non-existent. According to an IMF report, before the war there were 260 water sector assets in Syria, including water tanks, treatment facilities, and dams. Of those, about one-quarter—predominantly the water towers—have been damaged. The country has gone dark. The IMF also estimated that by early 2013, more than thirty of Syria’s power stations were inactive and at least 40 percent of the country’s high voltage lines had suffered damage. Syria’s two state-owned refineries, in Homs and in Banias, are operating at half capacity due to infrastructural damage.

About one-fifth of all primary healthcare facilities are no longer functional and another one-fifth is functioning at limited levels. About half of the country’s hospitals have been destroyed. The ratio of doctors to the overall population has plummeted nearly six fold from one in 661 people in 2010 to one in 4,000 in 2014 and it has certainly worsened since then. In besieged Aleppo, the ratio is about one doctor for every 8,500 residents.

An estimated 2.1 to 2.4 million children ages five to seventeen are not attending school, which is about half of the 4.3 million children eligible for primary and secondary education in the current school year in Syria. Of those attending school, one million are at risk of dropping out. In addition, more than 4,200 schools have been damaged, destroyed, or have been repurposed—either for military ends or as shelters by internally displaced persons—according to UNICEF. About one-fourth of the schools were destroyed or damaged in 2014 alone.

Residences have not been spared. About 65 percent of Syrian housing is damaged, excluding looting and break-ins.

Basic resources essential to the population’s survival have been destroyed or are unavailable. The regime has lost control of the main agricultural lands in Hasaka, Raqqa, and Aleppo. From 2010 to 2013, the national herds of sheep, cattle and goats declined by 30 to 40 percent, while poultry production fell by more than 50 percent. About half of Syria’s population is either internally or externally displaced and it is unclear whether they will be able to return. A recent UNICEF report placed the loss in human capital at $10.5 billion.

As a result of the destroyed infrastructure, the country’s economy is reeling. Foreign reserves are estimated to have dropped to $1 billion by the end of 2015—equivalent to about one month of imports—while the cumulative economic loss since the war broke out is equivalent to 229 percent of the country’s 2010 gross domestic product, according to research by the Syrian Center for Policy Research.

According to a BMI Research report quoted by Business Insider,  the Syrian economy will contract by an average of 3.9 percent annually from 2016 to 2019, reducing the Syrian economy to its early-1990s size. Syrian economist Jihad Yazigi estimates that the economy contracted in real terms by 55 percent since 2010.

Over half of the population is jobless. Capital has shifted from traditional industrial or trading families to new war business figures as wartime profits go to specific companies and sectors. As a result of last year’s elections for the regime-controlled Aleppo Chamber of Commerce, ten of the twelve members were newcomers; in Damascus, seven of the twelve were new. Yazigi explained that this is the result of immigration of the traditionally-wealthy class and the rise of a new elite.

According to the IMF, after fifteen years of civil war, it took Lebanon twenty years to catch up to its pre-war GDP level. It took Kuwait—which endured only two years of conflict—seven years to regain its pre-war GDP levels. Because Syria is witnessing unprecedented levels of devastation, it will likely take even longer for the country to recover. As early as 2014, a United Nations Relief and Works Agency report estimated that it would take thirty years for Syria to return to its 2010 economic levels.

The military solution can only take Assad so far—it is ultimately the restoration of the social contract that will bring stability to the country and allow for reconstruction. But to regain the people’s trust, Assad will need to ensure that Syria’s economic system allows for people to find employment and access basic utilities, especially in the rural areas. These regions have traditionally been neglected by the government and have slipped easily out of government control—first to rebels and then to the Islamic State.

To stay in power and stabilize Syria, Assad needs more than a military victory. Even prior to the revolution, Assad was already unable to achieve minimum economic stability, which ultimately triggered the revolution. Today, he cannot hope to do more, especially in the absence of support of much of the international community. “The rebuilding effort cannot stem alone from private donors, but will require the support of public investment such as the World Bank, Gulf donors, among others—something that is difficult to envision in the absence of a peace agreement,” says Yazigi. It will also need genuine reforms to rebuild the social contract between the government and people. Assad was not capable to make such reforms in 2011; it is unlikely he will be able to now.