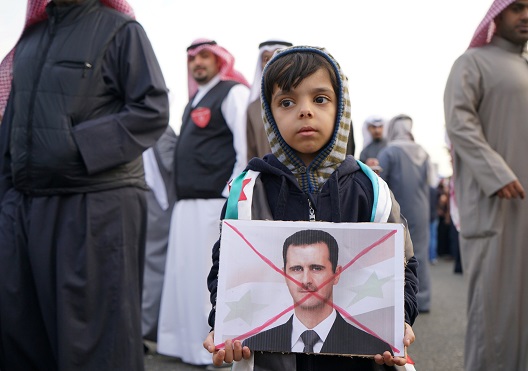 The outcome of the fourth Arab Economic and Social Development (AESD) summit held in Lebanon last month spoke volumes about the Middle East’s deep divisions. Iran’s role in the Levant and the question of Syrian President Bashar al-Assad’s legitimacy are unquestionably polarizing issues in the region. Both have potential to slow down the process by which Syria’s government, citizens, and fellow Arab states could reach agreement on a lasting settlement to the country’s eight-year civil war that could potentially pave the path for peace and stability returning to Syria.

In the days and weeks leading up to the regional economic summit in Beirut, numerous Arab League members made clear their divergent positions on the normalization of relations with the Syrian regime. Iraq, which has maintained ties with Assad’s government throughout the Syrian crisis, expressed its support for the restoration of Syria’s Arab League membership last month. Officials in Baghdad have spent years advocating that the Arab League reaccept Assad’s government, which the body suspended in 2011. The close military coordination between Baghdad and Damascus in the struggle against Islamic State of Iraq and al-Sham (ISIS) underscores the extent to which Iraq views the Assad regime as a vital security partner.

In December 2018, the United Arab Emirates (UAE) and Bahrain reopened their diplomatic missions in Damascus shortly after the Sudanese President Omar al-Bashir’s paid Assad a visit in Damascus. Jordan and Tunisia’s relations with Damascus are thawing too. At the same time, Algeria, Lebanon, Mauritania, and Oman never severed diplomatic relations with Syria’s regime. To various degrees, these four Arab governments have taken the side of the regime in the Syrian civil war, according to some observers.

But not all Arab League members are keen to embrace the Baathist regime in Damascus. Last month, Qatar’s leadership stressed that Doha will not normalize its relations with Assad and will continue to refuse the regime’s return to Arab league. The Qatari officials argue that Assad committed war crimes and the reasons for which Doha supported the suspension of the Syrian regime’s membership in the Arab League remain.

Saudi Arabia recently denied rumors that Riyadh was on the verge of following Abu Dhabi and Manama’s lead in reopening diplomatic missions in Syria. Yet last year, Crown Prince Mohammad bin Salman (MbS) stated that Assad is staying in power, which contradicted the Kingdom’s long-standing position on the Syrian crisis, and his statement was officially endorsed by Syria’s Foreign Minister Walid al-Muallem.

Egypt, which for years has advocated that Arab states resume relations with Syria’s regime, seems to be pursuing a different track. Cairo recently outlined its position on Syria, which is that the Arab League only reaccept Syria after a UN-led political solution to the civil war has been agreed upon, despite Cairo continuing to maintain security and intelligence ties with Assad’s regime. Kuwait has yet to normalize relations with Syria, although there have been hints about a coming rapprochement between Kuwait City and Damascus later this year.

While Russia leads diplomatic efforts to convince Arab states to normalize relations with Assad’s regime and unfreeze Syria’s Arab League membership one month before the next annual Arab summit in Tunisia, it is believed that the United States is working to retard the process in order not to jeopardize America’s ability to push for a sustainable political solution in Syria that serves Washington’s interests. In this sense, the odds are good that the slowing of Syria’s reintegration into the Arab world’s diplomatic fold is, at least partially, an outcome of US Secretary of State Mike Pompeo’s tour of the Middle East last month. Washington’s top diplomat and other US envoys likely warned Arab regimes against reaccepting Damascus without any permanent political settlement to Syria’s civil war. The US administration is putting pressure on some Arab states to refrain from further normalizing relations with Assad in order to extract concessions from Damascus that pertain to Iran’s future role in Syria. Regardless of how much Washington has influenced regional states to slow down their warming up to Syria, the Arab League’s secretary-general, Ahmed Aboul-Gheit, declared that the organization has yet to reach a final agreement on readmitting Damascus but that this issue will be addressed when the Arab League meets next month in Tunis.

As Riyadh, Abu Dhabi, and Manama are increasingly viewing Russia—as opposed to Iran or Turkey—as the outside actor in Syria that can best drive stabilization efforts, these Gulf Cooperation Council (GCC) members are hedging toward Moscow as they grow increasingly concerned about Tehran and Ankara’s agendas in Syria following the US military withdrawal from the war-torn country’s north (assuming that the American forces do pull out). Saudi Arabia and its regional allies seek to stand against Iran’s conduct in Syria by taking moves to strengthen Russia’s position in the Levant at the expense of Tehran’s. In this context, the no-shows at the AESD in Beirut were a way for Riyadh to take a swipe against Tehran and its main regional proxy, Hezbollah, which has too much sway in Lebanon as many Arab head of states see it. But by not sending their heads of state to the summit in Lebanon, the GCC’s anti-Iranian states displayed a contradictory policy with their new approach in Syria, which assumes that countering Iran’s influence requires engaging the Tehran-allied regime in Damascus rather than boycotting it.

Indeed, forces on the ground in Syria which are loyal to Assad have taken back almost all the territory previously controlled by Islamic State and Sunni rebels, emboldening the regime in its claims to have “won” the civil war. Furthermore, with a growing number of Arab states, including the oil-rich UAE which can play a major role in terms of investing in Syria’s reconstruction, the regional trend is toward a reacceptance of Syria into the region’s diplomatic fold. Yet as the Syrian crisis enters a new phase and moves closer to the “post-conflict” period, the question of Assad’s legitimacy and the extent to which Damascus has become subservient to Tehran will continue to complicate the prospects for Syria returning to the Arab League.

Dr. Ali Hussein Bakeer is an international relations analyst and political adviser. You can follow him on Twitter @AliBakeer.

Giorgio Cafiero is the CEO of Gulf State Analytics (@GulfStateAnalyt), a Washington, DC-based geopolitical risk consultancy. You can follow him on Twitter @GiorgioCafiero.

Image: A boy holds a crossed out image of Syria's President Bashar al-Assad during a protest against Russia's role in Aleppo, across the street from the Russian Embassy compound in Shaab, Kuwait, December 14, 2016. REUTERS/Stephanie McGehee