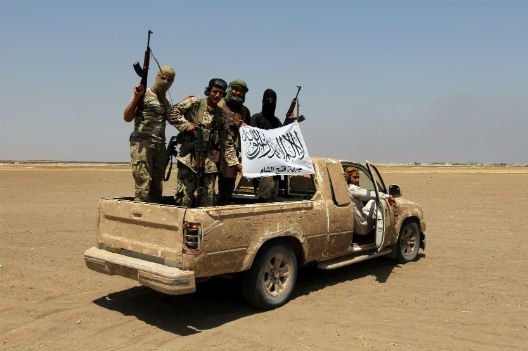 PHOTO: Fighters of the Syrian Islamist rebel group Jabhat Fateh al-Sham cheer on a pick truck after a Russian helicopter had been shot down in the north of Syria's rebel-held Idlib province, Syria August 1, 2016. REUTERS/Ammar Abdullah

On July 28 the Nusra Front changed its name to the Jabhat Fateh al-Sham and its commander, Abu Muhammad al-Julani, showed his face for the first time on television and laid out five priority points for the group: establishing God’s religion and the Sharia, uniting the opposition to liberate Syria and destroy the regime, protecting the Syrian jihad, serving Muslims and alleviating their suffering, and realizing peace, security, and stability in Syria.

The name change seems to be in response to continued local and international pressure to marginalize and drive out the extremist group. The Syrian opposition has long demanded that Nusra disavow al-Qaeda. They used the brief lull in violence from the February 27 cessation of hostilities to organize protests against the extremist group, and Nusra efforts to enforce its version of Sharia law on Syrian communities resulted in a strong, and at times even violent, backlash, such as this past May when the opposition group 13th Division attacked a Nusra outpost.

On the battlefront, Nusra is trying to reestablish itself as a leader among the armed opposition. In May, the armed coalition known as Jaish al-Fateh regrouped and launched a campaign to break the regime siege of rebel-held Aleppo, but has not managed to prevent the regime from cutting off the last supply line, Castello road. Jaish al-Fateh was originally responsible for a string of victories against the regime in 2015, including seizing Idlib city. Nusra capitalized on its leading role in the group to establish its presence as a leader amongst the armed groups, and it had hoped to transfer its status among the armed groups to the civilian front by enforcing its version of Sharia, including dress codes and education curriculums, on Syrian communities it controlled.

None of Nusra’s actions, though, gave it the grassroots support it needed. Nusra’s success was predicated on a fine balance of circumstances. It could only succeed if there was enough chaos and violence in the country that people would not protest it, and other armed groups were forced to coordinate with it against the regime. When the cessation of hostilities brought calm to parts of Syria, people immediately protested the armed group’s presence. When Nusra found itself losing popularity because of the cessation of hostilities, it tried to capitalize on battlefronts reopening in Aleppo. With the violence growing to a point that Nusra was unable to protect civilians, and coordinating with it was of no benefit to armed groups, it again found itself isolated. Significant military gains can help it gain popularity, but if calm and stability come to some of the territories under its control, the group will see a resurgence of anti-Nusra protests.

In changing its name, Nusra is weighing its options: either continued support from the international extremist group’s network or integration into the Syrian community. The name tells Syrians that it is a Syrian, not an international group, and breaking ties with al-Qaeda is a concession that the Syrian opposition has demanded of Nusra for a long time—it may, in fact, gain them some support. Julani showing his face was similarly an effort to personalize and demystify the group.

To a certain extent, this move may have worked. Although the United States still considers it a terrorist group, the purpose of the United States agreeing to intensify cooperation with Russia—targeting Nusra—is now in doubt. US State Department Spokesperson John Kirby said, “Ultimately it’s their actions, ideology, and goals that matter the most. And that’s how we’re going to judge going forward.” The US-Russian cooperation was already criticized as likely being ineffective and possibly even hurting the opposition overall, especially given Russia’s track record of unwavering support for the regime and an unwillingness to adhere to political agreements. With Jabhat Fateh al-Sham trying to integrate more with Syria’s armed groups and public, launching a military campaign against it will likely hurt the United States’ standing with the Syrian public and only have limited success eliminating the extremist group.

US Syria policy has until now relied on trying to separate the extremist problem from Syria’s broader war. The fact that the Islamic State (ISIS) established its own territory by driving out other armed groups and declaring a caliphate allowed the United States to militarily focus on ISIS while disregarding the regime. With Nusra, though, the United States was never able to do that because of how well integrated it was with the opposition. What made Nusra stand out was its ties to al-Qaeda, but what will happen to those ties now is unclear. The leadership of the new armed group has not changed, and they will likely maintain ties, even if only informal ones, with al-Qaeda, and their personal ideology will not change overnight.

However, to gain the grassroots support it needs to survive, the new group may shift its ideology. Nusra was not simply an Islamist group, it was a Salafi-Jihadist group, meaning that it believed that violence was an acceptable means of establishing its conservative form of Sharia law, and it supported al-Qaeda’s international terrorist network. In contrast, many other Islamist groups in Syria, while willing to coordinate with Nusra, have disavowed the use of violence to establish Sharia law, believing violence is only justified in fighting the regime and ISIS, and do not have the international element that Nusra had. The five points that Julani laid out in his statement are vague and do not indicate a behavior change.

If there is no change in the Jabhat Fateh al-Sham’s behavior, and if its ties to international terrorism remain active, albeit informal, then in a relatively short period of time we will be back to where we were: local rejection of the extremist group and international coordination to militarily destroy it. Localizing and integrating into the opposition might make the opposition more Islamist, but it can also have a moderating effect on Fateh al-Sham, since the armed and civilian opposition are unlikely to accept a mere name change. Such a change may take the form of the armed group being more willing to negotiate with local groups rather than resort to force, and distancing itself from excommunicating statements that alienate segments of Syrian society.

The current US policy seems to be driving the extremist element to burrow deeper into the opposition while alienating the moderate elements. The only option for the United States to remove it is to step outside of the narrow counter-terrorism framework it is currently using and consider the extremism in the context of the war. The continued violence and the regime’s oppression of people under its rule gives extremist groups ground to take root. Stopping the violence in the short term is not enough, but needs to be coupled with laying the ground work for negotiations and the establishment of a legitimate government. International agreements and UN resolutions need enforcement mechanisms and a willingness to follow through. Right now, though, the US administration seems to have written Syria off as a loss, leaving the Syrians beholden to whoever will protect them.