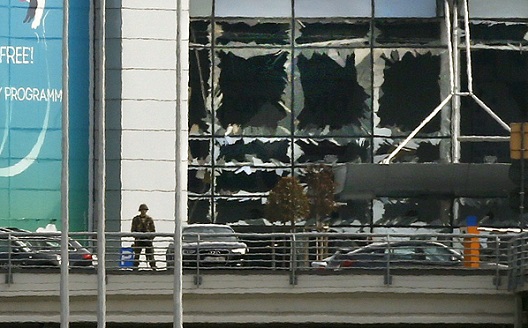 Mass murder in the Brussels airport and metro was almost certainly either Islamic State-planned-and-executed or inspired. Coming as they did very soon after the arrest of a Brussels-based perpetrator of the November 13, 2015 ISIS massacres in Paris—an operation planned in Raqqa, the Islamic State (ISIS, ISIL, Daesh) “capital” in Syria—these Brussels outrages may have been part of a contingency plan to be executed in the event of the key arrest.

Yet whether these atrocities were planned in Raqqa or merely inspired by ISIS is irrelevant. What is relevant is the observation of a veteran Belgian diplomat in the immediate wake of the attacks: “It is time to join forces to stop these crimes and protect not only the safety of our citizens but also the resilience of our societies. It is our model of liberal democracy that is under attack. We already see it in our presidential and other political debates.”

WATCH: @FredericHof comments on the #Brussels attacks and the #ISIS correlation. https://t.co/ILT50bnfRr

The ability of ISIS in Syria—where it is an imposed presence—to survive an American-led military campaign characterized by periodic air raids and episodic Kurdish militia operations does more than keep a bloody-minded planning cell in business. ISIS’ survival in the face of an American president vowing to “degrade and destroy” it inspires the damaged, disaffected, and deranged of the Sunni Muslim world: a tiny minority for sure, but still thousands of potentially lethal people. The Director of the CIA, John Brennan, has warned that ISIS is trying hard to replicate its European atrocities in North America. Giving the fake “caliph” and his crew in Raqqa time to do their worst is not an option.

For the better part of a year, one clear recommendation has been on the table: assemble an American-led, coalition-of-the-willing, professional ground component—one top-heavy in regional and European forces—to enter eastern Syria to close with and kill ISIS. Engaging the Syrian opposition at all levels, consistent with an executable civil-military stabilization plan, can produce an administrative structure for an ISIS-free eastern Syria. Killing ISIS in Syria can ease the migration crisis and hasten the demise of this murderous band in Iraq. And it can demonstrate to the credulously stupid that linking up with losers will be a one-way trip to self-destruction.

READ: @FredericHof in @Newsweek → #Brussels Blasts: We Must Destroy ISIS in Its Homeland https://t.co/KWnp2yOKlp

Time is not the friend of the West on this issue. The idea that Syria’s Bashar al-Assad—a major enabler of ISIS—should step aside as a result of negotiations so that a united Syrian front can be formed to liberate eastern Syria is fine in theory. Russian and Iranian military operations in support of their Syrian client have all-but killed it in practice. Waiting for the barbarians—who recruit on the basis of their own survival and Assad’s atrocities—to hit the American homeland and then retaliate with an all-American force is always an option. But why wait? Why make it all-American? Why not do the heavy, coalition-building diplomatic lift that has been recommended for months and kill these bloodthirsty criminals sooner rather than later?

Brussels demonstrates once again that time is the enemy.