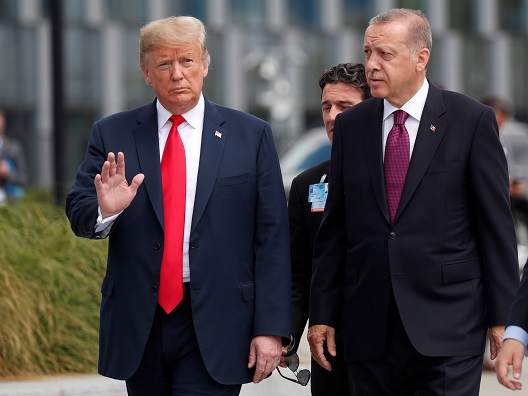 President Trump’s impulsive “out of Syria” tweet of December 19, 2018 may have sacrificed high value, low cost American leverage in eastern Syria for precisely nothing.  Russian, Iranian, and Assad regime alarm that the West would work with local Syrians in areas liberated from ISIS (ISIL, Daesh, Islamic State) to create the long-awaited governance alternative to Bashar al-Assad, family, and friends have all-but-evaporated.

It was that possibility – the presentation to all Syrians of a good government, civilized alternative to mass murder, state terror, war crimes, bottomless corruption, and subservience to Iran – that was the essence of Western leverage: not the physical presence of 2,000 uniformed Americans.  But those soldiers and marines were a tripwire and a symbol of American determination to seal the victory over ISIS by paving the way for political transition in all of Syria.  The president may have given it away.  For nothing.

Reportedly President Trump was ready last summer, at the Helsinki Summit, to give it all away then.  His national security team – now the target of malicious, cynical commentary by people willing to accept the ultimate defeat of the West in Syria so long as the president and his administration come across as soiled and divided – prevented preemptive surrender then and is trying to do so now.  The difference between now and then, however, is that President Trump on December 19th explicitly ordered the withdrawal of American forces from eastern Syria.  Official attempts to qualify the order and make its implementation consistent with American interests are inevitably falling short in terms of credibility and impact.  Secretary of State Mike Pompeo’s argument that the removal of 2,000 troops is merely a “tactical change” is the equivalent of whistling past the graveyard.  Unaccompanied by the tweet, a drawdown could be characterized exactly as Pompeo describes.  With it, however, the withdrawal is universally seen by friend and foe alike as an impulsive presidential decision to overthrow his own administration’s Syria strategy.

The damaging tweet was inspired by a verbal beating being administered to the president by his Turkish counterpart.  President Recep Tayyip Erdogan was reportedly taking Mr. Trump to task for the ongoing American military relationship with the Syrian chapter of the Kurdish Workers’ Party (PKK), a terrorist organization, in the battle against ISIS.

Had President Trump been properly briefed and prepared for the conversation, he would have said something like the following: “Mr. President, I hear you.  Had it been my decision in 2014 I would have put together a coalition of professional military forces – including yours – to kill ISIS quickly in Syria.  Not only could we have saved many lives, but we could have shortened the conflict in Iraq too.  But Mr. President, this is something I inherited.  And now I have three problems.  First – and most important – I have a key NATO ally angry with the United States.  Second, ISIS is still alive and breathing.  Third, if I’m seen as just walking away from the people who have been fighting ISIS with us for years, I’m buying a credibility problem that will haunt me and my successors all around the world.  I don’t want Kurds governing Arab parts of eastern Syria.  I don’t want our fight against ISIS to be wasted by turning liberated areas over to Iran and Assad.  I do want to work with you on finishing ISIS and stabilizing eastern Syria.  I’d like to send my national security advisor to Ankara now to work out a mutually agreed approach that addresses your problems and mine in ways we can both live with.”

Alas, Mr. Trump’s reaction to President Erdogan’s complaint was some variant of “Fine.  I’m out of there.  It’s your problem now.  Good luck.”  Then the tweet.  National security advisor John Bolton did indeed travel to Turkey, only to be rebuffed by President Erdogan after Mr. Bolton incautiously stated, in a radio interview, that Turkey had committed “not to harm the Kurds who had fought with us against ISIS:” something which, if true, obviously should have been kept private.  Mr. Bolton then suffered the additional indignity of reading words attributed to a senior American military officer to the effect that the withdrawal of American forces from Syria would proceed irrespective of anything the national security advisor had to say on the matter.

It is still hypothetically possible for the United States, Turkey, and Syrian Kurds to arrive at an arrangement embodying recommendations urged for years by this writer: empowered local governance for Syrian Kurds in Kurdish parts of northeastern Syria; a Turkish leadership role in the ground campaign against ISIS; and Turkish support for Syrian Arabs to recover from ISIS depredations while building an enlightened model of governance in liberated areas.

That hypothetical, however, may have been killed by President Trump’s impulsive action.  Under the best of conditions, it would not have been easy to convince armed Kurds to return to Kurdish areas or to persuade Turks to demonstrate respect and deference to local Syrians in the administration of liberated Syrian territory.  Who, however, will now put time, energy, effort, and commitment into something so difficult and so complex if key actors believe that an Oval Office live grenade can detonate without warning and destroy it all?  Who will make the requisite compromises and sacrifices if President Trump is seen as wanting to have no skin in the game?

In his recent Cairo remarks, Secretary of State Pompeo made no mention at all of the American policy center of gravity in Syria: the leverage it has (or had) by denying liberated eastern Syria to Iran and Assad.  He spoke instead of denying American reconstruction assistance to Assad/Iran-controlled areas and supporting a United Nations-led peace process: an Obama-lite approach at best.

But what could Secretary Pompeo do, given the tweeted preference of his commander-in-chief?  And who can blame Syrian Kurds for going to Russia in search of a local governance deal with Assad, one that Moscow would guarantee?  Of course, the Kurds will be betrayed, in the fullness of time, by both the Kremlin and the regime.  But their choice is stark: betrayal now by an American president eager to wash his hands of Syria and turn matters over to Turkey; or betrayal a year or two from now by the Assad regime, with the Kremlin taking its turn in the ceremonial washing of hands.

Nothing in Syria is salvageable as long as key players see an unbridgeable gulf between a freewheeling Oval Office and a disconnected national security apparatus.  President Barack Obama similarly went solo with the chemical weapons red line catastrophe he inflicted in 2013 on American credibility and the Syrian people, deciding impulsively and failing to consult with his national security team.  Later, he even went so far in an interview as to describe the disaster as his proudest foreign policy moment.  President Donald Trump can avoid and even repair the kind of gratuitous damage done by his predecessor by wiring himself into his own national security apparatus and by resisting the kind of impulsive, know-it-all behavior that accounted in large measure for his dog’s breakfast Syrian inheritance in the first place.

Efforts to square the circle of Turkish-Kurdish enmity for the sake of decent Syrian governance in eastern Syria – governance that keeps ISIS dead, Iran and Assad out, and gives 20 million Syrians a visible alternative to state terror and thievery – should continue.  But those efforts will likely be useless unless President Trump is seen as (ideally) driving the train in the company of a competent crew or, at the very least, strapped in for the ride with no inclination to jump off or to cause a derailment.

Twitter is not – notwithstanding the latest ill-considered, spontaneous presidential bombast about “devastating” the Turkish economy – the culprit.  Two consecutive administrations of poorly informed, reckless presidential action on Syria is two too many.  If cabinet officers and White House staff charged with helping the president properly execute his oath of office with sobriety and wisdom cannot do their jobs, they should leave and explain to their fellow citizens why they are leaving.  A thoroughly botched Syria policy – one unfolding to the delight of Russia, Iran, and what is left of ISIS – is not the end of the world for the United States.  But the ongoing spectacle of this particular botching suggests that the national emergency the United States may well be facing is either not located on or not restricted to the banks of the Rio Grande.