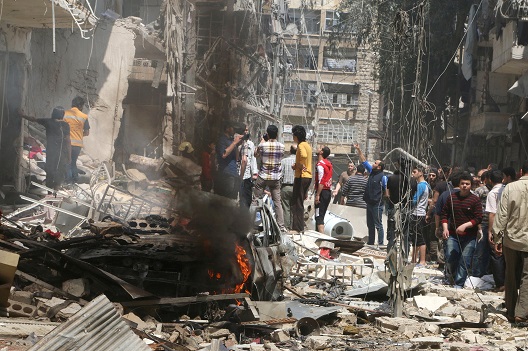 Last week, 51 State Department diplomats signed a dissent memo critical of US policy in Syria, calling for military strikes against President Bashar al-Assad’s government to force it to adhere to the February 26 cessation of hostilities (CoH). Concrete military action against the regime is the only course of action available to the United States to bring Assad to the negotiating table and prevent the collapse of peace talks, and in the process salvage US interests in the region.

At the very least, the United States backing up its statements of condemnation can convince the Assad regime to adhere to the CoH, which is best option for getting negotiations back on track. The CoH reduced violence for two months after being signed, but now the Syrian Network for Human Rights notes that the level of violence in Syria has returned to pre-CoH levels. Although both sides have violated the agreement, the Assad regime was the main aggressor during the CoH’s effective life, and in the past two months has bombed hospitals and a refugee camp in attacks which the United Nations called some of the worst of the war.

In March, Russia noted that it reserved the right to enforce the CoH unilaterally by striking rebel forces who violated the agreement, and under that pretense has repeatedly bombed opposition forces, including US-supported moderate forces that fight ISIS. While Russian air strikes are supporting the regime rather than enforcing the CoH, the United States’ failure to signal its own corresponding commitment to its interests allows the regime and its backers to realize their military solution for Syria’s war.

Assad’s hardline position, supported with what has been until now unwavering Russian and Iranian support, make it impossible to get him to abide by the CoH or negotiate without the threat of military action. The lack of a credible threat has led to the breakdown of every diplomatic initiative in the past five years and steadily increased the violence.

The Assad regime slowly introduced tanks, aircrafts, and chemical weapons based upon its perception of how far it could go before triggering an international intervention. For instance, the barrel bomb, one of the most deadly weapons was introduced in August 2012, and only came into widespread use after the beginning of the Geneva II talks in 2014. The regime first employed helicopters in the spring of 2012, slowly escalating until it expanded their use in the late summer, and has used them regularly since. By failing to force Assad to abide by the CoH, the international community is emboldening Assad. As was evident in the red-line episode in August 2013, a credible threat of military action can bring Assad to the table. However, continued empty threats and statements have undermined the United States’ and broader international community’s credibility. Limited military strikes would at least give Assad pause, and targeting key military facilities could cripple his ability to continue the war.

A negotiated settlement is far off by any measure, but enforcing a ceasefire in the short term is in US interests. Assad’s continued bombardment has created a refugee crisis that risks breaking apart the European Union, Terrorist organizations such as the Islamic State (ISIS), al-Qaeda in Syria (the Nusra Front), and Hezbollah are growing in strength, and Syria’s instability threatens neighboring countries. Lack of US leadership on Syria has made regional allies hesitate to take significant action, fearing the reaction of the Assad regime, Iran, and Russia. If the United States showed that it was willing to back up words with action, it could embolden regional allies and gather support for a regional coalition of armed forces.

During the CoH’s relative calm, civilians held hundreds of non-violent protests against both the Syrian regime and Islamic extremism. The Nusra Front was marginalized by the ceasefire as it condemned and clamped down on peaceful protests against Assad, instead calling on protesters to join the terrorist group in fighting Assad. On March 15, hundreds of Syrians protested against Nusra in the heart of their stronghold in Idlib, even breaking into Nusra’s headquarters in the town of Maaret al-Numan, which led to moderate rebels fighting and expelling the extremist group from the village. Nusra fears the CoH because it has reduced the killing and refuted their argument that only they can protect the Syrian people from Assad and Russia. The question of whether to abide by the ceasefire is also dividing Nusra and other armed opposition factions, including the hardline jihadists of Jaysh al-Islam and Ahrar al-Sham, who have rejected Nusra’s calls to abandon the ceasefire process.

Granted reprieve from the airstrikes of the Assad regime, opposition forces in northern Syria used the CoH as an opportunity to fight ISIS, expelling it from key locations in the Aleppo countryside including, briefly, the strategic town of al-Rai in April and Kafr Kalbin near Marea in June. If the CoH holds, military operations against ISIS and Nusra can proceed, and efforts to support civil society to counter radical ideology will be more viable.

Military strikes to enforce the ceasefire would grant the United States greater leverage with its partners in the armed opposition to hasten the much needed disentanglement between them and extremist forces, by reassuring Syrians that the United States is a reliable partner against both Assad’s tyranny and terrorist organizations. It would also strengthen the moderate opposition’s popular standing by showing that it has a serious backer.

The longer the ceasefire is maintained, the more of a stake in it the Syrian people on all sides of the front lines have, moving them to put pressure on all parties violating it, including the regime and Nusra.

Without the credible threat of military force, the CoH and political process will fall apart like previous initiatives and the aforementioned gains against Nusra and ISIS will be lost. The collapse of the Kofi Annan plan of 2012, and Geneva I and Geneva II talks all emboldened Assad to intensify his assault on the opposition. This time Assad and Iran have pledged to besiege Aleppo, which will lead to the worst civilian casualties in the war so far and, according to the United Nations, up to 700,000 refugees, which would be the largest single wave of refugees yet. Continued US passivity is the proven way to continue harming US interests in the region.

Omar Hossino is director of outreach at the Syrian American Council.