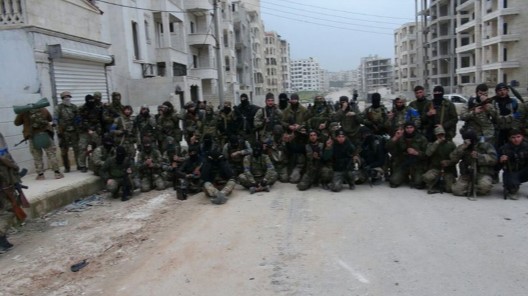 One of the most heavily-discussed groupings of foreign fighters in Syria are those from Chechnya and the North Caucasus. Coming from a region embroiled in two decades of insurgency against the Russian army, these fighters have long been highly touted for their experience and skill. While ultimately small in number, they have played an outsized role in the conflict, participating in major jihadist offensives in the country for half a decade.

Chechen and North Caucasian militants began arriving in Syria at roughly the same time as other foreign fighters. As the conflict intensified in mid-2012, shifting to conventional warfare between regime and rebel forces, so too did the strength of radical groups and the appeal of Syria as the new frontline of jihad. Undoubtedly the first significant Chechen-headed armed group was Katibat al-Muhajireen, formed in summer 2012 and the precursor to the more famous Jaysh al-Muhajireen wal-Ansar. Their leader was Umar Shishani, the infamous Chechen commander of Georgian origin who would later rise through the ranks of the Islamic State. Umar left the 700-strong group in early 2013, at which time he was replaced by another Chechen commander, Salahuddin Shishani.

Around this time, a crucial event occurred which spurred North Caucasian emigration to Syria. In August 2012, a group of roughly 20 militants was confronted by Georgian security forces as they attempted to cross the Russian border into Dagestan. In what became known as the ‘Lopota incident’ (after the gorge where it occurred), half the militants were killed and the remainder dispersed in the ensuing firefight. Researchers have viewed this as a turning point, representing the last concerted effort by militants to invigorate the regional insurgency in the North Caucasus. This was reflected in the attitudes among the insurgency itself, with one fighter stating that jihad in the North Caucasus had become “1,000 times harder than in Syria.” From this point onwards, the Syrian theatre become the focal point.

North Caucasian fighters in Syria saw their ranks bolstered by an unlikely ally: the Russian government. Beginning in 2013, the Russian security services began aiding and abetting the outflow of militants from the North Caucasus towards Syria and Iraq. This process occurred primarily in Dagestan, where FSB agents met with local facilitators in highland villages. The agents would attain a list of names of young men believed to have fought previously in the insurgency or to be at risk of doing so, procure passports for those fighters, and send them onwards to Turkey. While Chechen authorities, fearful of the consequences of exporting such fighters, prevented such activities in Chechnya, the FSB viewed them as a great success. As one agent put it: “[e]veryone’s happy: they are dying on the path of Allah, and we have no terrorist acts here.”

Paradoxically, the very success of the Syrian jihad (more specifically, of one group waging it) led to the fracturing of the North Caucasian jihadist movement. One of the first Chechens to join the nascent Islamic State of Iraq and Syria (ISIS, ISIL, or Daesh) was Umar Shishani, who pledged allegiance to the group in early 2013. Umar’s successful military exploits, notably his group’s role in the August 2013 capture of the Menagh military airbase, helped build his reputation as an effective commander. At this time, tensions between ISIS and al-Qaeda were coming to a head, with particular consequence for the North Caucasian muhajirun. Almost all of these fighters had sworn allegiance to the al-Qaeda-aligned Caucasian Emirate operating in their home region. With these pledges seemingly contradicting Umar’s newfound loyalty to ISIS, many Chechens in Jaysh al-Muhajireen wal-Ansar deserted their commander in November 2013, integrating into al-Qaeda’s Syria franchise, the Nusra Front. Open warfare between the two sides broke out a month later.

The definitive split between ISIS and al-Qaeda filtered down to its Chechen and Caucasian elements. The majority of fighters followed Umar Shishani into ISIS, with many militants under other notable Chechen commanders deserting and joining the ascendant caliphate. While Jaysh al-Muhajideen wal-Ansar pledged allegiance to Nusra in September 2015, most of its North Caucasian elements had by this point left the group. Another commander, the former deputy of Umar, Sayfullah Shishani, brought his remaining fighters into Nusra’s fold. Interestingly, a popular option for other militants from the region was to establish “third way” jihadist groups, cooperating with Nusra or ISIS on occasion but independent from both. North Caucasian fighters coalesced into two main such groupings, Junud al-Sham and Ajnad al-Kavkaz (a third, Jaysh al-Usro, would emerge later). This was largely done in order to avoid involvement in internecine fighting among Syrian rebel and jihadist groups, with the amirs of Junud al-Sham, Ajnad al-Kavkaz, and Jaysh al-Usro explicitly stating their aversion to fitna in a joint video statement from August 2017. This path was nearly unique to Chechen fighters, with Jund al-Aqsa the only other notable group to emerge as an independent; it is possible the reputation of the Chechen fighters and their attractiveness as allies allowed them to avoid formal cooptation, in contrast to what happened to many other factions.

At their peak, North Caucasian militants formed a significant portion of jihadist combat strength in Syria. Vladimir Putin estimated in February 2017 that 4,000 Russian citizens were then fighting in Syria, which is inline with many independent estimates. The largest group of these fighters hails from Dagestan, with the republic’s authorities stating 1,200 Dagestanis were fighting in the ranks of ISIS. Chechens come from two points of origin: roughly 600 from Chechnya proper and another 2,400 traveling from diasporas in Europe, having fled there in the 1990s and 2000s. Official sources state 100 Ingush are believed to have entered Syria as militants, with another 175 from the republic of Kabardino-Balkaria. Although not strictly North Caucasian, it makes sense to include Georgia’s Kists, a subethnos of Chechens, in this group: more than 50 of them (including Umar Shishani) left for Syria.

Ultimately, heavy battlefield losses and a shift in rebel fortunes following the Russian intervention increasingly marginalized Caucasian groups in Syria. Umar Shishani was particularly notorious for having little concern for the well-being of his men: such callousness led to the deaths of hundreds of Chechen ISIS fighters in the late 2014 battle for Kobane. Umar himself was killed in Iraq in July 2016, while significant numbers of Chechen fighters fought to the death in Mosul. Independent and Nusra-aligned North Caucasian groups, meanwhile, suffered the same reversals as the wider rebel movement, with the Syrian government’s recapture of Aleppo city in December 2016 leaving them without any clear next move. By mid-2017, the future of all Chechen and North Caucasian jihadist fighters within Syria was rather ambiguous—a topic that will be addressed in the next post on this subject.

The current and future state of Caucasian groups in Syria

Chechen, Dagestani, and other foreign fighters from Russia’s North Caucasus region (and Georgia’s Chechen-inhabited Pankisi Gorge) have formed some of the most formidable insurgent groupings in Syria’s conflict despite their small numbers, yet may look to exit the conflict soon.