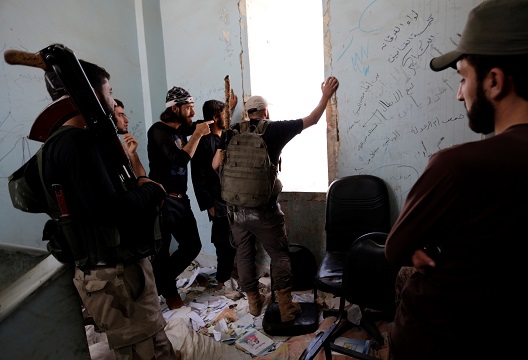 Chechen, Dagestani, and other foreign fighters from Russia’s North Caucasus region (and Georgia’s Chechen-inhabited Pankisi Gorge) have formed some of the most formidable insurgent groupings in Syria’s conflict despite their small numbers. Over the past year, however, their activity has slowed to a crawl, and their actions and statements suggest many of these fighters may look to exit the conflict area soon.

In a joint video release denouncing factionalism in August 2017, one of  three North Caucasian militant leaders, Muslim Shishani, remains prominent today. Of the commanders present, Salahuddin Shishani, was killed in a Russian airstrike in Syria’s northwestern Idlib province on December 18. Salahuddin was one of the most experienced Chechen fighters in Syria and was also one of the few that fought in Chechnya itself prior to emigrating, as a low-ranking member of the al-Qaeda-aligned Imarat Kavkaz (Caucasus Emirate) insurgent group. He was sent to Syria in 2012 to establish links with jihadists there. His group, Jaysh al-Usro, has not appointed a new emir or made any media statements since, and can be presumed defunct.

The final militant leader or emir, Abdulhakim Shishani, has also almost disappeared from public view along with his group, Ajnad al-Kavkaz. Prior to last year, he along with his men were the most visible and successful North Caucasian-dominated militant faction in Syria. They were an integral component of the Jaysh al-Fatah (Army of Conquest) rebel coalition that successfully captured most of Idlib province from the Syrian regime in 2015.

After the fall of Aleppo city in December 2016, Ajnad al-Kavkaz conducted semi-regular raids against regime positions in western Aleppo alongside the Russian-speaking militant group Malhama Tactical, including in May and July.

In October, however, Ajnad announced they were suspending all military operations, citing rebel disunity making further action senseless. Since then, the group has only appeared in media once, when its headquarters in Idlib city was struck by a car bomb on January 8. It remains unclear when or if the group will restart its activity.

Muslim Shishani himself has been the subject of numerous rumors in recent months. He was reported in January to be participating in Turkey’s Operation Olive Branch against Syrian Kurdish forces in Afrin. He refuted this in a statement on January 25, where he lamented that “Turks, Kurds, and Sham’s [Syria’s] people” were not fighting “side by side against these Shiites.” Iraqi news bizarrely reported his death in Iraq’s Kirkuk in early April, also quickly denied. In an interview with On the Ground News in March, Muslim Shishani confirmed that his fighters were battling regime forces in Hama, but again bemoaned rebel infighting, stating that “rebels are busy with splitting Muslims as good ones and bad ones, and they forget about the obvious enemy.”

Other small groupings of North Caucasian fighters are still active in a limited capacity. The group Katibat Abd al-Rahman, also known as Tarkhan’s Jamaat, is a small faction led by experienced Chechen jihadist Tarkhan Gaziev. While Tarkhan himself is somewhere in Turkey, his fighters are active alongside Jund al-Sham in Hama province, against regime forces. There are also an unknown number of North Caucasian fighters with Islamic State (ISIS) remnants in eastern Syria; one report from October claimed that ISIS leader Abu Bakr al-Baghdadi had a ‘praetorian guard’ of 800 Chechen fighters protecting senior leaders near the city of Mayadin. While this figure is almost certainly inflated, some Chechen and Dagestani fighters doubtless remain active with the group.

The openly deteriorating morale among North Caucasian commanders in Syria could indicate that the situation among the rank and file is even worse. Another Russian-speaking jihadist commander confirmed in remarks to the author that Muslim Shishani and his group Jund al-Sham had indeed slowed their military activity. The same commander added that many were frustrated with the opposition’s situation. Already by 2016, many North Caucasian jihadist militants and sympathizers had become disillusioned with the Islamic State and jihad in Syria. They felt they had been deceived by ISIS recruiters, as they found themselves fighting not the ‘apostate’ forces of the Assad regime but largely other Muslims.

While Muslim Shishani has sworn to fight until the end in Syria, his followers and those in other Chechen-led groups may not be so dedicated. Indeed, many of these fighters will attempt to cross the border back towards Turkey, where there is a longstanding North Caucasian diaspora numbering in the tens of thousands.

For North Caucasian fighters moving into Turkey, the most developed networks exist in the country’s largest city, Istanbul. The majority of Istanbul’s post-1991 North Caucasian immigrants reside in the neighborhoods of Kayasehir, Basaksehir, and Yalova, the first two on the western outskirts and the latter to the southeast. Certain organizations like the charity Imkander have been closely linked to Chechen and Dagestani militants and could facilitate travel. There are also Russian-speaking communities in Turkey’s south, including Antalya, where two North Caucasian ISIS militants were arrested in November 2015.

There has already been one high-profile case of a Chechen fighter returning to the Caucasus. In November, security forces in Tbilisi, Georgia killed ISIS commander Akhmed Chatayev in a 22-hour shootout after discovering him and two accomplices hiding in an apartment in the capital. Chatayev was a Syria veteran who had crossed the Georgian border with the aid of a yet-unexplained network after moving undetected through Turkey.

His is the only known case of a North Caucasian returnee from Syria appearing in Georgia, but the fact that such an easily-recognizable figure (Chatayev was missing one hand and one foot) was able to enter the country with apparent ease suggests others will be capable of the same. Russia and the North Caucasus itself has seen few returnees, none of whom have yet participated in attacks. It remains to be seen whether fighters will be able to access Chechnya, Dagestan and other once-volatile regions via Georgia’s mountains as they often did prior to 2012.

At present, it appears the era of North Caucasian jihadist fighters in Syria is drawing to a close. Two main questions now exist: what happens with the North Caucasian militants in Turkey, and will we see more attempts to move back to the Caucasus? While Turkey has cracked down on Russian-speaking communities in the past year, conducting mass arrests, it will nevertheless be challenging for the security services to fully infiltrate militant networks. This topic bears close watching as the Syrian conflict continues in 2018.

One of the most heavily-discussed groupings of foreign fighters in Syria are those from Chechnya and the North Caucasus. While ultimately small in number, they have played an outsized role in the conflict,.

Image: Photo: Rebel fighters from Jaysh al-Sunna, operating under a coalition of rebel groups called Jaish al-Fatah, or the army of conquest, gather inside a building at a lookout point in Aziziyah village, southern Aleppo countryside, Syria May 17, 2016. REUTERS/Khalil Ashawi