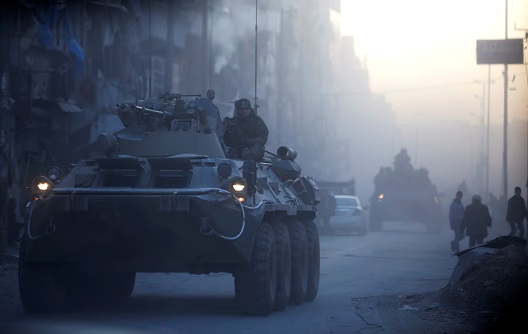 On the first day of the truce, Syrian government forces clashed with opposition groups in the northwestern “de-escalation zone” in Hama province. Several violations have been recorded since then, including some 500 airstrikes that hit the southwestern city of Daraa last week, despite a ban on flights and strikes by warplanes belonging to the Syrian government, Russia or the U.S.-led coalition.

Russia must push back against attempts to disrupt the deal, which it intends to leverage to both safeguard its interests in Syria and improve its standing with Washington and its allies, while refocusing resources on the race to capture the remaining so-called Islamic State strongholds in eastern Syria.

The question that remains is how Russia intends to secure the new zones.

Russian president Vladimir Putin could block Iran and Assad from dragging the deal through the dirt and secure Moscow’s wider interests in Syria if he resorts to one of his special weapons: Chechen and Ingush special forces hailing from Russia’s North Caucasus region, embedded within its military police units.

Tehran and Damascus have both expressed their support of the so-called de-escalation agreement, which calls on warring parties to halt the use of all weapons and warplanes in the four designated “de-escalation zones.”

Tehran is also one of the three architects behind the deal, which involves the deployment of troops to “security belts” on the edges of the protected areas, where armed forces will man checkpoints and observation points to oversee implementation and facilitate the movement of civilians.

Syrian rebel groups, however, are skeptical of Iran’s ability to comply with the deal.

Speaking to reporters during a press conference Monday, Russian foreign minister Sergei Lavrov said that details of the agreement are still being “hammered out,” but did not clarify how Moscow will seek to prevent its allies from shattering its success.

An established Russian strategy for enforcing Kremlin-sponsored cease-fire agreements is the deployment of Russia’s special Muslim forces in key flashpoint areas. This could allow Moscow to rein in dissenting allies, as it has done in the past.

In December 2016, Russian attempts to implement a cease-fire agreement between opposition groups and the Syrian government in the northern city of Aleppo were hampered by Iranian-backed supporters of President Bashar al-Assad, who intentionally blocked its enforcement.

Within weeks of the event, Russia sought out a new way to enforce compliance using a reliable, effective infusion of manpower. A unit comprising roughly 500 Muslim Chechen fighters was dispatched to Syria, as part of a new Russian strategy to control events on the ground using special forces drawn from its Sunni Muslim population. Russia later also deployed a smaller unit of at least 300 special forces from the North Caucasian republic of Ingushetia to aid Kremlin efforts in securing Aleppo.

Since then, Russia’s ground forces have continued to block attempts by Iran and the Syrian government to undermine Moscow’s wider interests in Syria. Russian military police, very likely the Chechen and Ingush special forces units, went on to safeguard all 11 rounds of rebel evacuations from al-Waer, the last opposition-held neighborhood in Homs province, preventing hard-line pro-regime militias from disrupting their execution.

Chechen units were deployed to front-line positions near the region of Manbij in March, to deter Turkish troops and affiliated rebels from carrying out attacks against Kurdish forces stationed in the area. Meanwhile, Ingush fighters were dispatched to the Damascus countryside, where they prevented the Lebanese Hezbollah from disrupting rebel evacuations from the town of Serghaya.

Given the positive outcomes for Russia in the past, Chechen and Ingush special forces could be dispatched to security belts around the de-escalation zones to oversee compliance with the de-escalation zone by manning checkpoints, distributing aid, guarding bases and even deterring attacks.

This would require a significant increase in Russian manpower in Syria; Moscow appears to have already laid the groundwork for such deployments and recent developments suggest that this tactic is at least being considered. Damascus has evidently been briefed on plans for Russian reinforcements, as Syrian foreign minister Walid Muallem recently declared that the de-escalation zones could be guarded by Russian military police. Russian officials, too, have suggested a potential increase in the number of military police deployed to Syria.

Developments on the ground also point to new plans for a special Muslim force in Syria. Russia’s Ingush units did not return from Syria on the scheduled date of May 10. Instead, Russia’s military police began appearing in strategic areas, mostly in southern regions of the country.

An activist-run platform for the Free Syrian Army published a video on May 27 purporting to show Chechen military police appearing alongside regime forces in the southwestern region of Suwaida, where pro-government forces are fighting FSA rebels. Photos circulating on social media networks also purported to show Chechen and Ingush forces stationed in the southwestern region of Quneitra, just a few miles away from the border with Israel.

The deployment in the area, which is listed as one of the four de-escalation zones, comes amid heightened tensions between the Syrian government and Israel, after the latter carried out at least three separate air raids on different parts of Syria over the past three months.

If Moscow has its way, areas in southern Syria and along the Iraqi border that are of concern to the U.S. and Israel will likely become quiet, as the priority shifts to a Russian-guided advance on remaining ISIS territory in eastern Syria.

While Moscow does not call the shots in Syria, Putin will continue to seek to change this situation through investing ever more resources in the country.

Neil Hauer is senior intelligence analyst at the SecDev Group in Ottawa, Canada. His work focuses on the Syrian conflict, primarily Russia’s involvement and Russian-speaking jihadists, and violent conflict in the Caucasus.