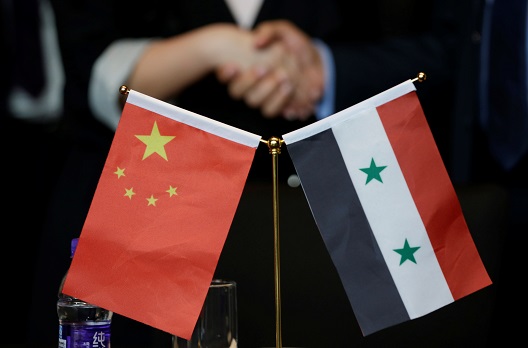 Canada moved to extradite Meng Wanzhou, the top financial officer for China’s global tech giant Huawei, on December 1, 2018 to the United States. The arrest, while closely linked to the ongoing US-China trade dispute and Western fears of Huawei as a Chinese espionage tool, was triggered by allegations that the company concealed payments from Iran in violation of sanctions.

The United States is expected to continue to pressure Chinese telecom companies in the US; and thereby indirectly halting deals with Iran and Syria which circumvent international sanctions. US Special Envoy to Syria Ambassador James Jeffrey stated that the US administration’s Iran sanctions affected oil shipments to Damascus, though he provided no details. By leveraging to keep international funds out of the hands of the Syrian government, the United States can significantly impact the mobility of the regime to enforce its redevelopment policies, which ultimately are not in favor of the majority of its citizens.

China has several incentives to cooperate with the Assad regime and support what it hopes will prove a stable and friendly government to China. These interests are linked to Chinese President Xi Jinping’s more assertive foreign policy, which envisions China using its formidable economic and political might to counter American influence globally.

Beijing aims to incorporate Syria into its Belt and Road Initiative (BRI) as a major transit hub, along with Iran and Iraq. Syria announced in September 2017 that China, together with Russia and Iran, is given priority as a friendly government for all infrastructure and reconstruction projects when the war is over. Chinese reconstruction aid is attractive to Assad because, unlike Western funds, it comes with no political strings attached. China’s primary focus seems to be economic trade deals, with diplomatic, security, and military relationships secondary.

However, China is also concerned about the five thousand Uighur Muslims from the Turkistan Islamic Party (TIP) —a militant group that has struck Chinese targets inside and outside China—that fight alongside Hay’at Tahrir al-Sham (HTS) in Idlib province.  China would rather defeat TIP in Syria than have to deal with them upon return to Central Asia or China itself. If its recent reeducation camps of local Uighur Muslims are any indication of its contempt for the minority group, China may see isolating them in Syria as a more cost effective strategy.

China’s foreign policy puts a heavy importance on national sovereignty and non-interference in other states’ internal affairs, and therefore is opposed to external pressure for Assad to step down. However, some Western detractors criticized China in that it only applies this value of respecting others’ sovereignty selectively, violating it when the situation serves China’s interest.

Finally, Beijing views cooperation with the Assad regime as a way to strengthen military ties with Russia. For instance, Chinese warships in July 2017 conducted live-fire drills in the Mediterranean while en route to the Baltic Sea for joint naval exercises with Russia. More recently, some 3,200 Chinese troops participated in September’s Vostok 2018 war games, which were intended to counter the United States and build trust between the Russia and China.

To protect its interests, China supported the Assad regime through a combination of direct aid, reconstruction assistance, and international political backing. Damascus is well aware that few countries—including its primary backers Russia and Iran—have the financial wherewithal to aid Syria’s reconstruction more than China, and the regime continues to aggressively court Chinese investment.

China aims to be a key provider of reconstruction aid to normalize Syria after the war ends. Not only has China already pledged to invest $2 billion in Syrian industries, but Chinese firms also have a major interest in the survival and stability of the Syrian regime. China’s delegation figured prominently at the 60th Damascus International Fair, with more than 200 Chinese companies in attendance.

In October, China also delivered some 800 electrical power transformers to Latakia as part of a reconstruction grant. Huawei has an agreement in place through 2020 to help Assad set up a broadband network. Additionally, the China National Petroleum Corporation also holds major stakes in the Syrian Petroleum Company and Al Furat Petroleum, the two largest Syrian oil firms.

Implications for the United States

China’s support for the Assad regime strengthens the regime and its Iranian and Russian backers while increasing Chinese influence in the Mediterranean theater, and undermining US-backed norms of responsible state behavior.

Russian and Iranian investment in Syria is undeniably a key part of Assad’s plan to stabilize areas under his control, but these states lack the capital needed to rebuild Syria’s devastated infrastructure systems. Assad’s prospects for reconstruction and the concomitant legitimacy conferred by economic recovery would significantly improve if he were able to mobilize Chinese investment, undermining US economic leverage and the goal of a democratic political transition.

Additionally, Assad relies on groups like Iran’s Islamic Revolutionary Guard Corps–Quds Force (IRGC-QF) and Hezbollah, which threaten American forces and partners across the Middle East, for the survival of his regime. China’s protection of the Assad government provides cover for Syria’s and Iran’s state sponsorship of terrorism—terrorism which, unlike that of the TIP, is primarily aimed at the West.

The Trump Administration has several means of responding to China’s Syria aspirations. Its strongest tool is the threat of coordinated sanctions on firms engaging in reconstruction in regime-held areas. The United States could also use Turkey’s concerns over increased Chinese regional engagement to push back against the BRI and reject China’s claim that Assad is a legitimate ruler. Finally, the US could utilize institutions like the UN’s investigative bodies, the International Impartial and Independent Mechanism (IIIM) and Organisation for the Prohibition of Chemical Weapons (OPCW), to continue to demand accountability for the atrocities committed in Syria by the Assad regime and its abettors. Certainly, justice is unlikely to be served through the UN thanks to Russian and Chinese veto power in the Security Council, but the US can still win international support elsewhere for its campaign to delegitimize Assad.

Through sanctions bills like the Caesar Syria Civilian Protection Act (H.R.1677), the US is poised to give teeth to its assertion that the Assad regime is illegitimate and that there is no prospect for long-term peace and stability in Syria without a political transition. Congress could first expedite the passage of these bills and then go further, demanding that the US and its international partners impose sanctions on any individual or firm that invests in regime-held territory.

The regime’s inability to use dollars and Euros in international transactions already presents an obstacle for Chinese investment, but this policy would reinforce the message with the threat of multilateral sanctions to effectively deter Chinese reconstruction assistance. Ms Meng’s arrest demonstrates that Chinese firms hoping to do business with the US must abide by US sanctions laws, providing much-needed leverage in the global tug-of-war between American and Chinese investment. It is time for the United States to take seriously China’s economic engagement with Syria.

Dan Hemenway is Fellow at Americans for a Free Syria.

Image: Photo: Chinese and Syrian businessmen shake hands behind their national flags during a meeting to discuss reconstruction projects in Syria, Beijing, China May 8, 2017. REUTERS/Jason Lee