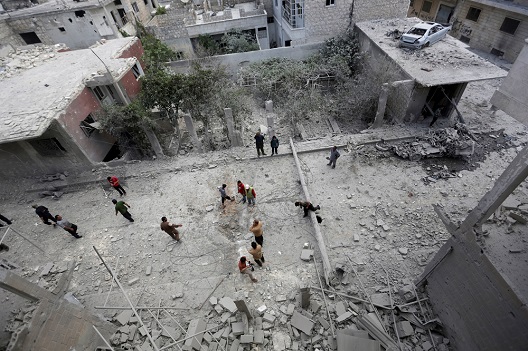 Photo: People inspect the damage at a site hit by airstrikes in the rebel-controlled area of Maaret al-Numan town in Idlib province, Syria June 2, 2016. REUTERS/Khalil Ashawi

On Wednesday, June 8, at least 10 people were killed in strikes targeting the Bayan hospital in opposition-held Aleppo city. Staff from the nearby Children’s Hospital had to remove nine newborns from their incubators after the aerial assault, according to the Independent Doctors’ Association in Syria.. This adds to nearly 740 doctors and staff have been killed in more than 360 attacks on hospitals in Syria, according to Physicians for Human Rights. The international community has done little to protect civilians in Syria, and Staffan de Mistura’s recent statement that the “time was not yet mature” for more peace talks suggests nothing will be done soon. But while international negotiations struggle to gain traction, donors and the humanitarian community can adjust their programs to save lives now.

With borders around Syria more tightly sealed than ever before and attacks on internally displaced persons (IDP) camps, even displacement is no longer a feasible self-protection strategy for civilians. Abed, a 28 year-old aid worker from Bustan al Qasr, one of the most heavily hit neighborhoods in Aleppo, constantly fears for the safety of his wife, nine-month old daughter, and parents, but there are few options for civilians in opposition-controlled areas in Syria. “I can’t leave now and my whole family is here including my father and mother. We can’t get out. The roads to Turkey are cut. Where would we go?” Abed told Center for Civilians in Conflict (CIVIC).

As CIVIC learned through research in a recent report Waiting for No One: Civilian Survival Strategies, civilian harm could be mitigated through the development of accurate, locally led early warning systems, enhanced protection mechanisms for civilian infrastructure (such as hospitals, schools, bakeries, electricity grids, etc.), and local unexploded ordnance and risk education teams. Such support could take the form of mainstreaming physical protection throughout humanitarian and post-conflict response and the creation of a working group dedicated to local conflict preparedness and risk mitigation. This group could incorporate individual self-protection strategies, entrepreneurial efforts to develop local resilience, (such as alternative energy sources for opposition controlled areas and locally-led early warning systems), and engineers with a background in building in high-risk areas. The creation of such a group to respond to real-time needs can be replicated within the UN system for other conflicts.

However, for the past five years, civilians in Syria have had to protect themselves against regime barrel bombs, chemical weapons, and air strikes. Individuals and local NGOs began developing their own self-protection strategies. Syrians began moving underground, replacing their glass windows with fiberglass, stacking sandbags around the exterior of vital infrastructure like hospitals, and looking to the skies hoping to have some warning before the barrels or missiles began falling. They began following the trajectory of the regime’s warplanes, developed spotter networks that looked for incoming planes, and tried to intercept Syrian and Russian military radio transmissions. These networks proliferated in opposition territory, developing under both civilian and military leaderships. Limited technology hurt local efforts, though. For instance, the sirens tend to ring out as the bombs fall. Problems such as these can easily be remedied as part of aid packages to opposition territories.

The Syrian American Medical Society (SAMS) and other humanitarian organizations and schools have been literally forced underground to protect their operations, medical facilities, patients, and staff. Due to some of the major government donors’ bureaucratic constraints, SAMS relies primarily on the generous donations of individuals to build underground hospitals. Other protection strategies would cost nothing. In Douma, it is now standard procedure to start and end the school day early and cancel breaks between classes to reduce the time students are concentrated together. Students leave in different waves so that they will not be targeted. Amr al-Faham told CIVIC about various alternative energy techniques that are low cost and allow people to be independent of costly generators and regime controlled electricity grids, which are often shut off to put pressure on besieged populations. Instructions on making a simple solar panel using locally available sources are now available on YouTube. Not only can it provide more stable power, but the people are no longer at the mercy of volatile prices and aid convoys and do not have to buy oil from ISIS.

With support from donors and humanitarian aid organizations, these strategies can be further developed and disseminated to protect more civilians now. But for the United Nations and humanitarian non-governmental organizations (NGOS), protection traditionally stems from the secondary effects of armed conflict: need for access to identity documentation, creating child friendly spaces, and sexual and gender based violence, which in Syria has been used as weapon of war. However, in many opposition-controlled parts of Syria, protection from explosive weapons and siege tactics remains the paramount concern. Rethinking what protection means to incorporate immediate life-saving concerns in conflicts like Syria, Yemen, and Gaza where most civilians have been harmed through explosive weapons, the devastation of vital infrastructure, and blockades on essential supplies will save lives and allow civilians to better fend for themselves during armed conflict.

Given the inability and unwillingness of internationals to enter most of opposition‑controlled Syria, it is time to put survival into the hands of civilians themselves. Civilians will always be on the frontlines and the primary bearers of their own survival. Support given directly to Syrian NGOs and civilians will allow them to have more control over their own survival—they are the ones in danger and most able and willing to act to improve their chances for survival.

Supporting survival strategies is not an alternative to a just peace settlement. But while high level officials convene in the safety of Geneva, there are still people and communities that deserve protection in Syria. As one doctor from Aleppo said, “There is still beauty. We still have blues skies, trees, and a lot of people… But they need protection. We’ve been shouting for over four years for more protection and support to hospitals that are running out of doctors and equipment and continue to be targeted.” Supporting these practical and sustainable solutions go beyond aid relief, and require providing concrete ways to save lives now.

Natasha Hall is the Middle East North Africa program officer for Center for Civilians in Conflict (CIVIC). A full report of CIVIC’s findings on Syrian civilian protection strategies and recommendations can be found at this link. Follow CIVIC on Facebook and on Twitter at @CivCenter.