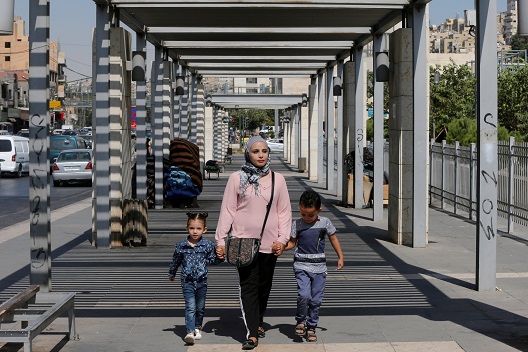 On October 4, President Trump officially approved a refugee cap of 30,000—an all-time low. In August, despite previously increasing aid to Jordan, the US decided to end all UNRWA funding for Palestinian refugees in Jordan, Lebanon, Syria, and Palestine. This summer, the Supreme Court upheld Trump’s controversial travel ban that affects refugees and immigrants alike. Of the eight countries listed, five are in the Middle East/North Africa.

Trump’s disinterest in aiding or hosting refugees is undeniable. In the interest of protecting US national security, current US refugee policies result in a missed opportunity for growth in the US economy and stabilizing policies in the Middle East. Instead, these misguided US policies may contribute to destabilization in the region, particularly in Jordan and Lebanon; some of the smallest states with limited resources.

Much of the grievances and political consequences of the Arab Spring relate back to economic issues of high unemployment, economic opportunity inequality, and lack of public services.

Since then, the broader Middle East has experienced the political ramifications of economic stress. This summer, proposed tax hikes to pay off Jordan’s increasing debt resulted in nationwide protests and the prime minister’s resignation. In Lebanon, protests due to the strained resources, like electricity and water, are common. Across the Middle East, unemployment, poverty, and economic discontent are some of the leading motivators that have prompted thousands to join groups like al-Qaeda and the Islamic State.

Ultimately, cold US policies towards refugees fail to ease the economic burdens and potential subsequent political instability of Middle Eastern nations hosting large refugee populations. In countries with reasonable demand for labor, non-restrictive employment policies, and adequate resources, refugees actually boost an economy. Yet for Middle Eastern nations hosting much of the region’s refugees, this is not the case.

Jordan and Lebanon host over four million UNHCR/UNRWA registered refugees and thousands more “unregistered refugees.” Both are prime examples of Middle Eastern nations lacking demand, policies, and resources to realize the economic benefits of refugees, unlike Western countries like the US which do have the resources.

As of 2017, Jordan’s soaring unemployment rate of 18 percent is largely the product of limited resources and insufficient labor demand to meet a surging labor supply from over one million Syrian refugees. Midway through this year, Jordan had only received 21 percent of finances needed to adequately aid refugees. Lack of resources to aid refugees coupled with insufficient demand for labor creates a cycle that increases unemployment. Due to job shortages, refugees turn to expensive “brokers” to find employment. The cost of brokers in addition to increased costs of living—a result of the refugee influx and limited housing—and the lack of Jordanian and UN resources to provide adequate aid often keep refugees from obtaining even the cheapest work permits, in which the cost is typically passed on to refugees.

Unemployment itself is not the only way Jordan fails to realize the benefits of refugees. An increase in refugees means more consumers, but consumption and tax revenue do not increase as much as they should due to high unemployment. Jordan’s GDP per capita, an indicator of consumption relative to population, illustrates this best, decreasing over three percent since 2009.

With the inflow of refugees, Jordan’s water supply and other resources are strained due to a limited resource pool. Jordan’s lack of resources for refugees has led to growing debt, burdening the economy and, like its high unemployment, contributing to a decreasing GDP per capita. This growing debt prompted the Jordanian government to raise taxes in June; a move which backfired and was quickly reversed.

Unlike Jordan, Lebanon does not suffer from extremely high nationwide unemployment but still has very high refugee unemployment, resulting in impoverished and economically unstable areas. This is primarily the result of harsh refugee employment and residency policies. Refugees who cannot obtain legal residency have slim prospects of finding employment without risking arrest.

When Trump refuses to provide assistance to refugees by hosting refugees or offering resources and assistance overseas, Middle Eastern nations whose environments are not suited to realize the economic benefits of refugees are forced to bear the economic burden of large refugee populations. However, economic instability by itself is not the only issue, as it also erodes the pillars of political stability.

Insufficient labor demand, lack of resources, and negative refugee employment policies keep countries like Jordan and Lebanon from realizing the benefits of refugees. However, the US, which has added over 1.5 million jobs this year, has enough labor demand, resources, and refugee-friendly employment policies to seize the benefits of refugees and adequately employ them while avoiding high levels of unemployment.

Lutheran Services Refugee Service Coordinator, Dylan Gunnels, who works closely with refugees and their employers, notes that “money [invested into aiding refugees], actually gets a return on the investment.” The investment into aiding refugees is relatively small, as most financial aid for refugees ends after eight months. Gunnels, who works in South Carolina, claims that for “every dollar [South Carolina] committed to refugee resettlement, [it] saw a return of up to five dollars.”

Refugee-friendly US policies that provide significant assistance (through refugee intake and providing resources overseas) would not just benefit the US, but would alleviate the burden of refugees on Middle Eastern nations. Moreover, they would increase resources and decrease the labor supply and demand gap in Middle Eastern nations, creating environments suited to realize the benefits of refugees and turning potential negative effects of refugees into positive ones. This would help establish economic stability in the Middle East, which in turn could support political stability. A stable Middle East means a more secure US.

Friendlier US refugee policies, albeit a drop in the bucket, would benefit the economy and national security. Furthermore, they would be a step toward supporting and realizing the economic benefits of refugees in the Middle East, benefits which potentially bolster the region’s political security. Ultimately, regardless of the benefits or costs, everyone’s help is needed in aiding millions of Middle Eastern refugees.

Seth Hershberger is an Employment Specialist for Lutheran Services Carolinas’ Refugee and Immigrant Services and is a former intern at the Atlantic Council’s Rafik Hariri Center for the Middle East. Follow him @HershbergerSeth.