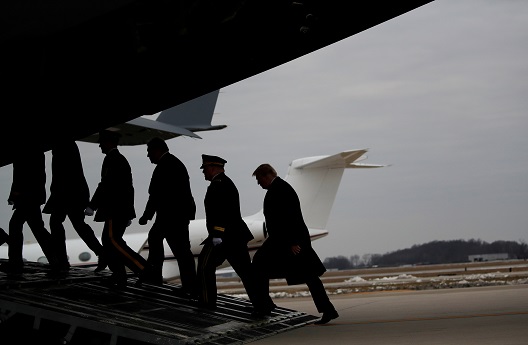 French authorities were undoubtedly upset, if not very surprised, by US President Donald Trump’s sudden announcement of a withdrawal from the northeast of Syria. On several occasions during his talks with President Trump, especially when he came to Washington for a state visit in April 2018, French President Emmanuel Macron was very insistent that the US and their allies should stay, ultimately he did not change the American president’s decision and campaign commitment to end America’s wars abroad.

Macron reacted bluntly to Trump’s tweet, publicly stating that “allies should be reliable.” Other French officials repeated that the fight against the Islamic State (ISIS) was far from over. The main difference between the White House and the Elysee palace may lie here: there are still several hundred French jihadists roaming the banks of the Euphrates, posing a potentially devastating threat to French citizens. France views outsourcing the removal of ISIS to other powers, such as Turkey or Russia, as a very bad idea; especially since their interests do not align with the priorities of France. Outsourcing entails a significant risk that a large number of foreign fighters may be recruited by Russia and Iran to fight for the Syrian regime. A larger ongoing threat—due to the rise of terrorist bombings worldwide—is that these same extremists may inflict more damage in their home countries.

Another French concern lies in abandoning Syrian Kurdish allies which sends a bad signal about the credibility of the West. There are two ways to abandon Syrian Kurds: expose them to a Turkish military attack, or push them into the Assad regime’s arms as suggested by some American analysts.

A swift withdrawal could furthermore trigger new waves of escalation either in the northeast, or in the southern regions of the Euphrates, or even in Idlib. As US Secretary of State Mike Pompeo said: “When America retreats, chaos follows.” Seen from Paris, the US is depriving itself of one of the few tools available to contain Iranian influence in Syria. This is especially strange at a time when some Arab governments are beginning to re-establish diplomatic relations with Damascus. These renewed relations will be interpreted by Damascus as  an approval of the Syrian regime’s ongoing engagement with Iran.

In that context, French officials have very much welcomed the recent change towards an unrushed US retreat, which French Minister for Foreign affairs Jean-Yves Le Drian called an “adapted withdrawal.” What would be the criteria of a successful withdrawal seen from a French perspective?

First of all, of course, comes finishing the job with ISIS. Given the nature of such a terrorist organization, the Global Coalition to Defeat ISIS should be maintained and it should destroy the last basis of the former caliphate in Syria before leaving. Most importantly, it should leave a group to remain and deal with the resurgence of the organization to coordinate a strike from elsewhere if needed. Iraq, in that context, is becoming a crucial partner. France has its own work to do given the presence of French citizens among the ranks of detainees or active terrorists in Syria, but it needs more time to coordinate a domestic counter terrorism strategies for homegrown extremism.

A second priority should be to find an agreement with Ankara to manage Turkish concerns, while protecting the security of the Syrian Kurdish people and the survival of the PYD (Kurdish Democratic Political Party) although not with its PKK (Kurdistan Workers’ Party) affiliation; an insurgent group that has been active in southeast Turkey for the past four decades.

This seems an impossible task. In fact, the US has to solve this daunting problem, which should have been handled quietly and slowly over several months, not by withdrawal over a few weeks. This task is made even harder by the fact that Washington’s hands in the region is weakened, due to the announcement of the withdrawal, whatever the results of the coming discussions may be. It is also true, on the other hand, that the prospect of a tight schedule for the withdrawal of US troops has encouraged various actors, such as Turkey and Russia,  to focus their mind on this issue. Contrary to a few signs of drama, Ankara and Washington may for instance be poised for a compromise. Reports about a possible buffer zone are encouraging, even though such a zone could only be a piece in a larger package.

A third priority may seem more elusive: it concerns the political framework for next steps in Syria. French authorities have not taken a position on this issue, other than re-expressing their support for the political process under the auspices of the UN. From the point of view of an observer who has been following Syria for a long time, we should be under no delusion: if the regime and its sponsors are allowed to cross the Euphrates, seize the natural resources of the region and re-establish their rule over Arabs and Kurds alike, this would amount to a huge political victory forthe Assad regime. Indeed, the conditions for permanent unrest and future revolts would be met, laying the groundwork for the resurgence of terrorist networks.

Russia appears to be the new broker in the Middle East. There should be serious talks between the Coalition and Moscow on how to re-launch a political process on Syria under current circumstances. If one wants to be optimistic, one could say that the prospect of an American withdrawal makes it even more important for Russia to push for a political settlement as a stabilizing factor. With Turkey, Iran, Israel, Hay’at Tahrir al-Sham, and an emboldened Assad regime and others, the situation could easily escalate and destabilize at any moment.

Ambassador Michel Duclos is senior advisor to the Institut Montaigne and a nonresident senior fellow at the Atlantic Council’s Rafik Hariri Center for the Middle East. He formerly served as French Ambassador to Syria and has held a number of senior diplomatic positions throughout his career.

Image: Photo: U.S. President Donald Trump follows U.S. military leaders, Secretary of State Mike Pompeo and a military honor guard into the back of an Air Force transport plane as they retrieve the remains of Scott Wirtz, a civilian employee of the U.S. Defense Intelligence Agency killed along with three members of the U.S. military during a recent attack in Syria, at the start of a dignified transfer ceremony at Dover Air Force Base, in Dover, Delaware, U.S., January 19, 2019. REUTERS/Carlos Barria