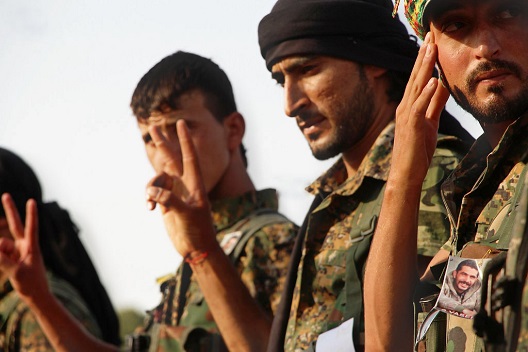 Russia’s recent intervention in the Syrian crisis will create new circumstances to which the Kurdish forces must respond and adopt a position. Whatever the Kurds decide will alter the current equation and ultimate outcome of the Syrian crisis.

American support for Kurdish forces battling Islamic State (ISIS) fighters on both the Iraqi and Syrian fronts constitutes the key factor affecting the Kurds decision toward the Russians. The current tepid US support for limited air strikes targeting ISIS convoys heading toward Iraqi Kurdistan and Rojava—the majority Kurdish region in northern Syria, which gained its de facto autonomy in November 2013—will only disrupt ISIS’s capabilities without strengthening the Kurds’ military presence vis-à-vis ISIS.

Kurdish leadership, fully grasps how unwilling the United States is to equip armed groups with heavy weaponry, especially after repeatedly requesting direct military support from the United States to combat ISIS to no avail. Russia, for its part, appears to appreciate Kurdish concerns on the matter of ISIS. Statements in the Russian daily Sputnik attributed to Sipan Hemo, General Commander of the People’s Protection Units (YPG), indicate that the Kurds are prepared to cooperate with Russia should American military support remain lacking. YPG leadership quickly issued a response rejecting the article’s assertion, and affirming that its alliance with the United States has never been stronger.

Should coalition aircraft ever cease flying anti-ISIS sorties over Rojava, Kurdish civilians, cities, and towns in the province will be in immediate and imminent danger. With the exception of only a few dilapidated, Soviet-era tanks and armored personnel carriers, the YPG severely lack the type of American-made anti-armor vehicles and heavy weaponry seized by ISIS when they captured Mosul in June 2014 and are substantially outgunned by the terror group. In fact, should the YGP remain reliant upon US and coalition air cover alone, Kurds will be held hostage by America’s quest to form a political consensus on Syria and Assad with other regional powers, particularly Turkey, which continues to wage its violent, century-long campaign to quell Kurdish independence. Therefore, as long as the United States is only willing to furnish the YPG with light weaponry, it makes sense for Kurdish forces to take advantage of Russia’s overtures to provide arms.

The interest of the Democratic Union Party (PYD), the ruling body in Rojava, in altering or even terminating its dependence upon the United States in favor of one with Russia is a pivotal factor in Kurdish politics. Kurdish leadership now widely acknowledges that US air cover for the YPG—the military branch of the PYD—was ostensibly designed to prevent the Kurds from incurring strategic losses that could jeopardize their existence in Syria. However, it was also contingent on the Kurds promoting coexistence among Syria’s disparate ethnic and religious groups and creating conditions conducive for a democratic transition after Assad’s eventual deposal.

Recent events further confirm that the United States is making anti-ISIS air support contingent upon the establishment of conditions favorable for democracy. The United States compelled the PYD to sign the Dohuk Agreegment with the Kurdish National Council of Iraq to unite Kurdish groups hostile to each other. Similarly, the US Ambassador to Iraq Stuart E. Jones hosted a meeting this September to bring together two opposing politicians, Masoud Barzani, President of Iraqi Kurdistan, and Salih Muslim, Co-Chairman of the PYD. Additionally, observers of Kurdish affairs in Syria believe that the reduction in censures and arrests of activists and politicians opposing PYD interests in Rojava is due to US pressure on the Democratic Union. Accordingly, should the PYD seek to reduce or terminate these US-imposed limitations upon Kurdish self-governance, it could turn to Russia for support in fighting ISIS without political precondition.

However, any alliance with Russia may do more harm than good to Kurdish interests. Iran, a key client of Moscow, has sought to destabilize the region by arming Hezbollah to fight in Syria and Lebanon, and supporting former Iraqi Prime Minister Nouri al-Maliki’s campaigns of sectarian incitement in Iraq—https://www.washingtonpost.com/news/monkey-cage/wp/2014/06/12/iraq-trapped-between-isis-and-maliki/“>policies that contributed to ISIS’s rise and continued growth. The United States will not tolerate any such Kurdish-Russian rapprochement because it would subvert core US interests in the region. Moreover, an arrangement between Syrian Kurds and Russia would decrease both the will and ability of the United States to pressure Turkey to spare YPG units in Ankara’s ongoing battles against the Kurdistan Workers’ Party (PKK), who have been targeting Turkish aircraft in Iraqi Kurdistan for the past several months.

For its part, Russia must avoid provoking Turkey in Syria, where it and Ankara pursue polemic interests. Russia is waging devastating attacks on Turkey-supported, anti-Assad forces in Hama, Idlib, and Aleppo. If Russia intensifies its attacks, Turkey could reciprocate by attacking pro-regime troops along the Turkish-Syrian border. If Turkey responds militarily against Russia’s clients in Syria, Moscow may subvert Kurdish interests and discontinue any association with the YPG in exchange for Turkey ceasing its operations against Syrian forces allied with the Kremlin.

Further analysis casts doubt on the viability of a Russia-Kurdish alliance, at least in the near future. Amongst Moscow’s primary objectives is preserving its naval base in Tartus, Russia’s only port on the Mediterranean. It also wants to maintain its monopoly on the export of natural gas to Europe by incorporating Syria’s network of coastal natural gas wells into its own grid.

To achieve these goals, Russia must ensure the territorial integrity of the Syrian coastline and preserve the still internationally recognized Assad government. Such a policy is viable as long as the international community does not seriously consider partitioning Syria into Kurdish, rebel, and regime-held territories. Given Russia’s faltering economy, it is unlikely to expand its Syria agenda beyond the points elucidated above, especially given that the it still largely avoids fighting ISIS, its official—or at least diplomatic—justification for intervening in Syria.

Hostile parties surround Syria’s Kurdish population on all sides. Turkey, the Nusra Front, peripheral extremist groups such as Ahrar al-Sham, and ISIS all threaten the Syrian Kurds existence on a daily basis. Clearly, Syrian Kurds are in dire need of a robust deterrent to counter such threats. In July, Ankara allowed the coalition members to stage anti-ISIS missions from Incirlik airbase in southern Turkey, and days after the agreement Turkey conducted airstrikes against PKK bases. Kurds generally interpret this as tacit US approval for the Turkish airstrikes, exacerbating fears of an anti-Kurdish sentiments among Turkish leadership and possible US-Turkish quid-pro-quos.

For all of the problems plaguing the US Kurdish relations, an alliance with Russia is not the panacea to the Kurd’s complaints. Russia would only accept Kurdish overtures on this front to further weaken US standing in Syria and leave it without any real allies in the war-torn country. Ultimately, the costs of such an arrangement with Moscow far outweigh the costs, irrevocably damaging Kurdish prospects for a lasting democracy in Rojava.

Daryus al-Darwish is a civilian activist and independent journalist.