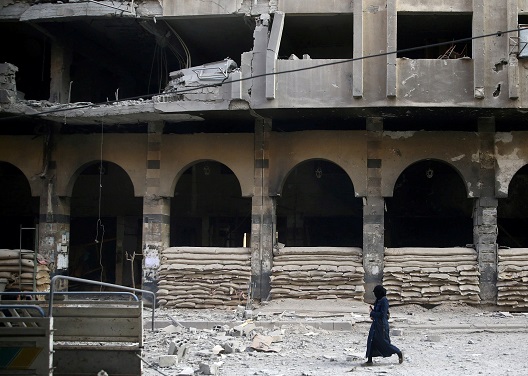 A woman walks at a damaged site after an airstrike in the rebel-held city of Douma, in the eastern Damascus suburb of Ghouta Syria November 2, 2017

Russian President Vladimir Putin has all-but-declared victory in Syria. He has welcomed his Syrian counterpart to Moscow and has spoken at length telephonically with President Trump. He has preserved a Syrian family enterprise steeped in criminality and left the “state” he claims to have saved firmly in the hands of Iran. To the extent this grim result is a “victory,” it is not a triumph of the Russian Federation. It is personal in nature: it is Exhibit A in Vladimir Putin’s assertion to his domestic constituents that he has restored Russia as a world power; that Russians need not dwell on economic shortfalls or chronic corruption; that the days of post-Cold War humiliation and disgrace are over.

Putin now wishes to seal politically the military advances his air force and Iranian-led foreign fighters have achieved on behalf of the Assad regime and its broken army. He knows full well that Bashar al-Assad and his entourage will never share, much less yield, power. Yet he also senses that the Trump administration, like its predecessor, is, as they say in Texas, “all hat and no cattle:” that when Secretary of State Rex Tillerson says there is no future for the mass-murdering Bashar al-Assad in Syria, it has the same vacuity as similar words Secretary of State John Kerry used to utter. Putin suspects that Washington seeks a face-saving exit from Syria, and he is willing to provide one.

Russia’s leader touts Syrian constitutional reform and power sharing, as if the former has meaning and the latter is possible. Syria, under present management, could write a constitution converting Assad’s specified powers to those of Queen Elizabeth. It would mean nothing: the Assad entourage would still pick the pockets of honest citizens and detain, torture, and kill those rash enough to resist. A free and fair election? The kind that Bashar al-Assad might lose? Forget the technical obstacles of a national vote in a broken state. Does anyone believe that this man and his entourage would partake in an honest process and voluntarily yield power?

The conviction and life-sentencing of Ratko Mladic is instructive for Bashar al-Assad. He knows that to share power risks losing it. And to lose power is to mount the slippery slope leading inevitably to The Hague. It is a state of affairs familiar to Vladimir Putin. And if Assad is the face of a “state” allegedly saved from an American-led regime change campaign, why would Putin try to pave the way for the possibility of genuine political transition in Syria? Indeed, what makes some observers think he is capable of influencing anything in Syria beyond the perpetuation of Assad rule?

All of this is fully known to American officials now, just as it was to the Obama administration. Two consecutive secretaries of state seek to cooperate with Moscow on an end-game for Syria. The difference seems to be this: John Kerry thought his persuasive skills and force of personality could convince Moscow to perform a thoroughly unnatural act: support genuine political transition. Rex Tillerson has no such illusion. He seeks to help his boss break free of Syria in a way that saves face and perhaps even enlists Moscow in a campaign to slow Iranian hegemony.

Some officials seek to put the best possible face on what amounts to an attempt to avoid, with as little effort as possible, the humiliating consequences of an Obama administration foreign policy disaster. They claim to wield the big stick of depriving Syria of reconstruction assistance in the absence of political change, claiming that this constitutes leverage over Moscow. And they point to a long history of adversarial relations between Tehran and Moscow, implying that it is only a matter of time before Iran and Moscow fall out over Syria. These hope-filled arguments, as sincerely believed as they may be, are demonstrably false. Their tactical aim, however, may be identical to that of Barack Obama’s gratuitous “quagmire” warning to Vladimir Putin: to kick the can down the road in the hope that something good may turn up.

Yet nothing good in terms of American national security interests is likely to turn up from cooperating with Vladimir Putin in Syria. Putin has stood aside as Assad’s air force and artillery have resumed mass civilian slaughter in Aleppo Province and the eastern Ghouta. Washington has stood aside as well, reaffirming the Obama administration policy of speaking loudly about Assad regime depredations but wielding no stick. What does it say to American officials touting cooperation with Russia when Moscow—either because it supports mass murder, or is powerless to stop it, or both—either watches its Syrian client do his worst or joins in?

To establish domestic political bragging rights for having saved Assad and restored Russia to greatness, Vladimir Putin is solidifying Iran’s grip on Syria. Tehran’s principal interest in Syria is to place the country at the disposal of Hezbollah in Lebanon: Iran’s money-laundering, drug-running, and international terrorist asset in the Arab world. Major General Mohammed Ali Jafari, the head of Iran’s Revolutionary Guard Corps, just announced that the disarmament of Hezbollah—allegedly a Lebanese political movement—is “non-negotiable.” Putin, whose air force pales in significance to the ground forces of foreign fighters assembled by Iran in Syria, seeks American cooperation in placing Syria firmly in the hands of the likes of Jafari.

One need not dismiss the possibility of cooperating with Moscow and even Tehran for civilized political arrangements protecting civilians in all of Syria. Civilian protection is, after all, essential to preventing the rise in Syria of political movements every bit as violent as the Assad regime and Hezbollah. But it is a snare and a delusion to try to do so without leverage, as John Kerry demonstrated spectacularly for the whole world to see. Protecting Syrian civilians and securing Syria east of the Euphrates constitute the table ante for eventually defeating extremism and blocking Iran in Syria. If these goals are of no importance to the Trump administration, then it may as well just leave things to Putin. For the sake of America’s reputation, however, it should not be called cooperation.