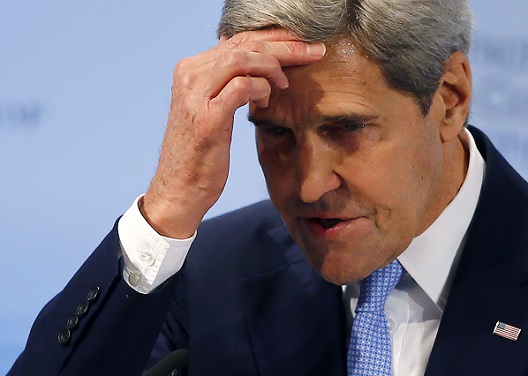 As noted repeatedly in these pages, Secretary of State John Kerry has spared no effort to reduce violence, increase humanitarian aid, and promote negotiations for political transition in Syria. That he does so with leverage amounting to a smile and a shoeshine is not his fault. That he relies totally on the goodwill, decency, and humanity of Russia’s president, Iran’s supreme leader, and a Syrian war criminal, is not his idea of diplomacy 101. That he feels anger and frustration is not surprising. In recent days he said the following: “Now, a lot of cynics have criticized our diplomatic efforts. But I want to point out very clearly they have not offered a realistic alternative that actually decreases the bloodshed and ends the conflict.”

There is, to be sure, no shortage of cynicism when it comes to Syria. The role of the Assad regime in promoting the rise of Islamist extremism and terrorism to crowd out principled, non-sectarian opposition practically defines the word. When Iran and Russia tout a regime defined by mass homicide and collective punishment as the civilized, secular alternative to Islamist terror, surely cynicism is afoot. Hopes once prevailing among the political high and mighty of the West that Syria’s agony could be contained, so that villains of various stripes could kill one another to their hearts’ content, reflected cynicism laced with cruelty and stupidity. Indeed, the same toxic mixture animated the actions of regional actors who, in promoting the fortunes of pre-Islamic barbarians in the name of an anti-Assad uprising, thoroughly undermined the revolution and boosted the prospects of Bashar al-Assad himself.

No, cynicism has not been lacking in a national meltdown now approaching its fifth year. Western leaders have employed brave words knowing full well they would not act, even if bluffs were called defiantly and publicly. A Syrian politician has been repeatedly excoriated for having “lost all legitimacy” even as he is afforded continued legal recognition as the President of the Syrian Arab Republic. An opposition coalition is proclaimed “the legitimate representative of the Syrian people” and then hung out to dry as the dart board for blame and ridicule by Western statesmen eager to divert attention from their own conduct and performance. The scapegoating of the weak by the strong surely involves a healthy measure of cynicism.

For John Kerry, however, cynicism resides elsewhere: with critics of administration policy. This is not a new theme for an administration within which there is no shortage of senior officials who regard American policy as an absolute disaster. In his excellent Black Flags: The Rise of ISIS, Joby Warrick quotes White House wordsmith Benjamin Rhodes as saying, “I think, candidly, that a lot of people have used this debate to position themselves for posterity as being for doing something in Syria when in fact it wouldn’t have made much difference.” Leave aside that the use of the word “candidly” is an indicator that the thought articulated is anything but candid. Leave aside the broad brush nature of the accusation. What is important is not the view of a staffer, but that of his boss. If President Obama thinks that his critics are poseurs and their ideas are all useless, what does it imply about his willingness to correct a disastrous course during the time left to him in the presidency?

Mr. Kerry too is perfectly free to claim that nary a “realistic alternative” has been offered by critics. This critic takes special exception to the claim. What is important, however, is whether or not the President of the United States recognizes that a significant policy shift is required. What is critical is whether or not he is energizing his national security apparatus to produce alternatives for his consideration. If he is satisfied with the present course, if he is at peace with the political implications for allies of Syria emptying itself, and if he is satisfied that mass murder in Syria can go unanswered on the grounds that it is not genocide, then it will likely be up to his successor to stop digging and eventually climb out of the hole.

Secretary of State John Kerry may, God willing, see hostilities substantially reduced, sieges lifted, bombings of civilian residential areas ended, and political transition negotiations begun in earnest. Recent, horrific suicide bombings by the so-called Islamic State (ISIS, ISIL, Daesh) drive home the sense of urgency. In a world in which decency, respect for human life, and a sense of political restraint ought to manifest themselves now and then, Russia, Iran, and the Assad regime would ideally recalculate their interests and see the wisdom of what Kerry recommends.

As matters now stand, however, Kerry’s success depends entirely upon that goodwill recalculation, or perhaps the recalculation of two actors willing and able to compel the actions of a third. It is not an exercise in cynicism to point this out. It is not unreasonable to suggest that Mr. Kerry’s leverage would be greater if Syrians had some defense from murderous Russian and regime air assaults, and if ISIL in eastern Syria were exterminated by a professional ground combat force. If one wishes to find Syria-related cynicism, focusing on critics of Washington’s current and longstanding policy is to look in all the wrong places.