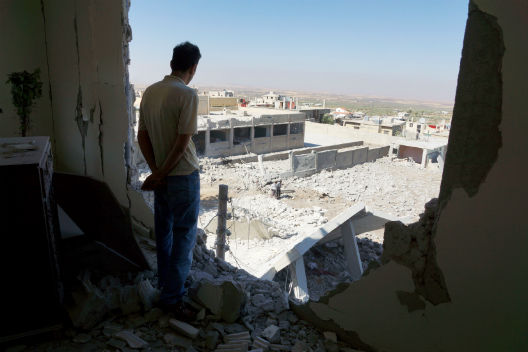 The Turkey, Iran, and Russia-led Astana talks concluded their sixth round in the Kazakh capital yesterday, with the announcement of an initial agreement about Idlib reached between the guarantors. After multiple rounds of UN-led peace talks over the course of the conflict failed to make progress, Astana has become the incubator for the current multilateral peace initiatives. While a process directed by the three main players at Astana is unlikely to form the basis for a political solution that assuages concerns of Western governments or international bodies, it does provide a roadmap toward a reduction in violence through the ‘de-escalation’ proposal, first posited at the fourth round of talks last May.

The de-escalation process to date has successfully brought about enough of a ceasefire to reduce violence between the Syrian government and their allies and the armed opposition in the four de-escalation zones: Idlib province, Eastern Ghouta, northern rural Homs, and southern Syria (to include Quneitra and parts of Daraa governorate). For those noncombatants living in these areas, any reduction in conflict is a welcome change after nearly seven years of war.

To understand the implications of de-escalation, however, one must consider it in the context of the greater trajectory of the conflict, particularly since Russian participation in late 2015. Rather than offering something novel, de-escalation is better viewed as a more palatable iteration of the reconciliation strategy employed by the Assad regime in the wake of the series of failed ceasefires over the past year-and-a-half.

The Cessation of Hostilities negotiated between the United States and Russia in February 2016—followed by further ceasefires in September and December—allowed Assad’s forces and their allies to regroup and attack specific areas in an attempt to gain strategic advantage. During this time, a series of so-called reconciliation efforts took place. Beginning with Darayya in August 2016 and repeated in other areas up to early 2017, President Bashar al-Assad’s forces and their allies used siege tactics alongside negotiations to forcibly displace those rebels deemed irreconcilable and return territorial control to the Assad regime. Neither Assad’s strategic objectives nor that of their allies have shifted since that time.

While the de-escalation plan has provided a more successful ceasefire framework than previous attempts, and a negotiated local settlement in each area rather than a show of brute military force, the long-term aim remains the same: remove or neutralize irreconcilable armed actors and political opponents and return the area to government control. For this reason, the opposition’s National Army initiative, an effort to unify the opposition armed groups, is a double-edged sword. It can help provide a unified front in negotiations and get concessions in the negotiations. However, Russia and Iran, the primary regime backers, will see it as a threat to their ultimate goal of helping the regime regain territory.

Following the fifth round of Astana talks in July, the fate of the four de-escalation zones diverged. Rather than managing the zones under a single policy, participants agreed to consider each zone on its individual circumstances. As negotiations drag on, however, the deals run an increasing risk of failing:

Southern Syria presents the most likely possibility of a long-term negotiated solution, in large part due to the number, commitment, and motivation of the international actors involved in negotiating the agreement. In addition to Iran, Turkey, and Russia, the southern zone also includes the United States and Jordan, with additional consideration being made for neighboring Israel (including caveats mandating the withdrawal of Iranian backed troops and militias from the area). Reopening the Nasib border crossing—closed since 2015—and reactivating the commercial route between Jordan and Syria are motivating factors for both countries. Neutralizing the ISIS threat in the Yarmouk basin next to Israel and facilitating the return of refugees from Jordan and the informal Rukban refugee camp to a more stable southern zone also play heavily on the parties’ interest in finding a lasting solution. Despite varying levels of commitment to the opposition, residents have begun protesting to ensure that any deal includes the return of internally displaced persons (IDPs) and the release of detainees—both primary demands of the opposition in the south. From what little detail has been made public, however, the opposition’s demands around IDP and refugee return, unimpeded humanitarian aid access, civilian protection, and the release of detainees from the area has not seen significant consideration.

In Eastern Ghouta, the Assad regime and Russia use a ‘divide and conquer’ strategy for the area, attempting to pit the two main rebel groups—Jaysh al-Islam and Faylaq al-Rahman—against each other. Despite announcing agreements with both groups, Jaysh al-Islam has actively negotiated with the Russian mediators since the July 22 Cairo announcement. Meanwhile, Faylaq al-Rahman has failed to remove Hay’at Tahrir al-Sham (HTS) from the areas under its control, prompting Russian threats to scrap the Eastern Ghouta deal. Trade route contracts into the besieged area have shifted from a monopoly held by Mohieddine Manfoush, a local business man who runs the Manfoush Trading Company and controlled trade access into Eastern Ghouta, to individuals associated with Jaysh al-Islam, and there have been small prisoner swaps, both of which suggest discussions are proceeding. Eastern Ghouta was headed toward reconciliation prior to the ceasefire, so it is unlikely that the area will remain an opposition outpost in the long term, though it seems likely Jaysh al-Islam will continue toward an agreement, after they restricted access between the two halves of Eastern Ghouta, in an attempt to force Faylaq al-Rahman’s hand.

The increase in humanitarian aid access promised in the original Astana agreement has not been forthcoming in a sustained or meaningful way across the ‘de-escalation’ areas. It is also likely that the Astana guarantors will try to use the promise of aid and the reduction in violence as grounds for consolidating humanitarian aid access in Damascus. Given that the government, and their allies, have a long and storied history of blocking humanitarian access, it would be unwise to overestimate the reach of the de-escalation process at this point. The Assad government, backed by Russia, will likely use the perceived success of de-escalation as a reason to block the renewal of the cross-border aid resolution (UNSC 2165), set to expire in January 2018.

UN Syria Envoy Staffan de Mistura’s has made recent comments about the success of the de-escalation proposal and the need for the opposition to accept that they have lost the war, and reflects an increasing international resignation that the only way forward in the Syria conflict involves violence reduction as the groundwork for an inevitable political settlement. The problem with this view—and the Astana’s de-escalation plan—is that it ends the same way as the reconciliation strategy: with no discernible political solution or concessions from Bashar Al-Assad as he takes complete control of the country with Iranian and Russian support. Reform, accountability, or justice would all fall to the wayside, offering little hope for long-term stability or the return of millions of Syria’s displaced. While de-escalation may reduce violence, it is not a roadmap for lasting peace in Syria.

Emma Beals is an award-winning independent investigative journalist and analyst, focused on conflict and social issues. She has most recently been concerned with reporting on the Syrian civil war. Follow her on Twitter @ejbeals.

Image: Photo: A man looks at damage out of a hole in the wall from what activists said was barrel bombs dropped by forces loyal to Syria's President Bashar Al-Assad in al-Hara town in Daraa, Syria, July 11, 2015. REUTERS/Alaa Al-Faqir