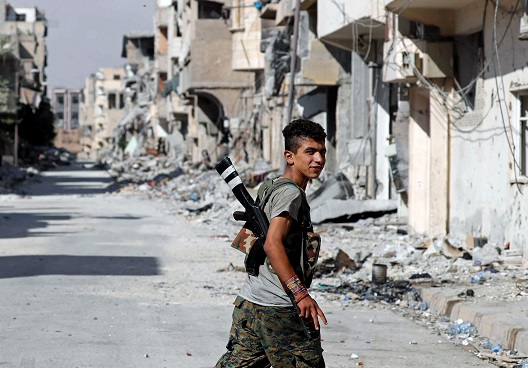 It is hard to have a conversation about Syria without speaking or hearing the words “how depressing.” This has, in fact, been true for years. The Obama administration observed, unopposed, a relentless, multi-year campaign of civilian mass homicide by a larcenous, incompetent, and brutal regime, one fully enabled and encouraged by Russia and Iran. The administration protected not one Syrian from a homicidal government, pretending that to try to do so could make things worse: a time-honored excuse for inaction in the face of mass murder. It stood aside and averted its gaze from the slaughter of innocents so that a nuclear agreement—supposedly the jewel in the crown of the administration’s foreign policy achievements—could be had with the Assad regime’s principal accomplice. Indeed, given the extent of humanitarian abomination and policy malfeasance, depression may be the luxury of those not directly affected by systematic state terror and its consequences, both human and policy.

As the Trump administration catalogues the Syria-related policy wreckage it has inherited, it does so from the perspective of the bottom of a deep pit. Yes, the Syrian policy odyssey of the Obama administration was almost entirely subterranean. It is not the fault of the new team that it is looking up to see down. But has it stopped digging?

Some senior American officials perceive the possibility—even the likelihood—of a positive role to be played by Moscow. They reason that a ruined Syria is no good for Russia; it will trap Moscow in endless conflict and render Syria worthless as a client. Russia, according this line of thinking, views massive reconstruction as essential and realizes that no one with real money for grants, loans, and investments will channel anything of value through a Syrian regime for which thievery is as natural as breathing. Is it not logical, therefore, that Russia will support power-sharing in Syria sufficient to enable the flow of reconstruction funding into the country? These officials also see the Moscow-Tehran relationship in the context of historical rivalry and enmity, rather than a collaborative effort to sustain Assad and expel the West.

The danger, of course, is that this may prove to be sleep-inducing wishful thinking; a re-phrasing of President Obama’s self-serving advice to his Russian counterpart that military intervention in Syria would entrap Moscow in a “quagmire.” We may now be hearing Quagmire 2.0.

It is true that Russian officials are calling on the world to rebuild Syria. Yet: is there evidence that Moscow wants Bashar al-Assad to share power in any meaningful way? Is there evidence that Russia can compel Assad to empower a unity government in Damascus and permit empowered local governance throughout Syria? It seems clear enough that a criminal operation like the Assad regime cannot simultaneously share power and exist. And there is no doubt that Iran—the preeminent external power in Syria—wants its reliably subservient subordinate to share power with no one. Assad alone will put Syria at the disposal of Iran’s irreplaceable tool for terror and regional hegemony: Hezbollah.

Are the goals of Moscow and Tehran in Syria ultimately incompatible? Conventional wisdom suggests Russia wants a strong Syrian state able to sustain bilateral partnership through trade, arms purchases, and regional influence, while Iran only wants strategic depth for Lebanon’s Hezbollah and a Syria molded for that specific purpose. Even if conventional wisdom proves correct, both sides may see Assad rule as enabling full Iranian-Russian compatibility. And excluding the West from Syria while degrading Western influence in the region may suffice for President Putin and Supreme Leader Khamenei to set aside historic enmity between Iran and Russia.

Is the Quagmire 2.0 proposition worth testing? Several months ago, at the outset of the Trump administration, this writer suggested that Russia’s intentions with respect to Assad’s future would be clarified by developments in eastern Syria: that if Moscow decided militarily to try to restore the regime in areas vacated by or liberated from the Islamic State (ISIS, ISIL, Daesh), it should be taken as a clear signal of Russia’s intention to go all the way with Bashar. Well, the results are in: Russia is clearing the way militarily for Iranian-led foreign fighters and regime forces to ford the Euphrates River and move east.

Was the test invalid? Perhaps. What is important now, however, is that the Trump administration devise its own tests, conduct real due diligence, and decide what to do if Quagmire 2.0 turns out to be as uselessly invalid as 1.0.

Senior American military officers rigidly focused on the defeat of Daesh in eastern Syria sense an impending quagmire far more real than that posited by the rhetoric of the Obama administration and the optimistic thinking of its successor. When asked about issues of post-combat stabilization and the presence of regime and Iranian agents of political destabilization in eastern Syria, senior officers can say little beyond expressing hope for policy guidance soon from Washington.

This is a sad, and entirely avoidable state of affairs. For years this writer has urged his government to plan for the defeat of Daesh, to treat eastern Syria as a no-fly and no-go zone, and to work with locals and the Syrian opposition to establish an indigenous administrative successor to Daesh. No crime was committed in rejecting this recommendation. Yet, with the defeat of Daesh impending, why are senior military officers still awaiting policy guidance on post-combat stabilization? Is there something about the harsh lessons learned in Iraq and Libya that make them inapplicable elsewhere?

When this writer joined the Atlantic Council in late 2012 he took up publicly the same theme he had pressed privately for the previous 18 months in government: the United States must have an objectives-based national security strategy for Syria. That which caused him to leave government was not a dispute over policy. Rather it was his inability to convince his superiors that objectives and strategy mattered. He did not know, in late 2012, that Syria would be entirely subordinated to the pursuit of a nuclear agreement with Iran: a party fully witting and supportive of the Assad regime’s murderous survival strategy; a campaign of mass terror and homicide that would have profoundly negative political and policy implications far beyond Syria. Regardless of what one may think of the nuclear agreement reached in July 2015, its existence and maintenance need not be barriers to the new administration knowing what it wants in Syria and having a plan to achieve it.

Perhaps the only antidote to utter depression in all of this is the sure knowledge that the Assad family, its entourage, and its enablers will not outlast the Syrian people. Yes, Syrians are desperately tired of the mayhem inflicted upon them by a malevolent government, that government’s external accomplices, and by Islamist extremists inspired and sustained by the regime and its foreign backers. Yes, Syrians feel an acute sense of abandonment by a hollowed-out West and by regional actors who themselves are no strangers to cynicism and opportunism. Yes, perhaps the time has come to abandon the armed resistance forced upon the revolution by a murderous regime; armed resistance captured in large measure over the years by regionally supported sectarian primitives whose betrayal of the Syrian people rivals that of the regime they purport to fight.

Iran and Russia will likely seek to extend and sustain the writ of their client to every corner of Syria. They may well mistake the exhaustion of Syrians for surrender, and the fecklessness of the West for permanent consent. Yet whether or not they experience the sinking sensation of quagmire, they will find that the regime they support will lack the legitimacy, vigor, and endurance to rule Syria reliably. There may be sufficient flows of laundered money in Syria now to enable regime racketeering for months or even years. This will certainly be good enough for Tehran, and perhaps for Moscow too. Yet the desire of Syrians for genuine self-government will not be permanently denied: not by Russia, Iran, their client regime, or an indifferent West. The courage and sacrifice of ordinary Syrians will, in the end, produce independence, self-rule, accountability, justice, and an end to chronic depression.