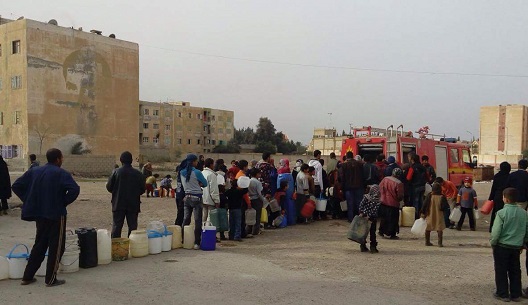 Photo: Firefighters in the besieged neighborhoods of Deir Ezzor city distribute water to civilians after water was cut for most of the neighborhoods starting from January 16, 2016. Taken by JFL on January 23, 2016 and reposted with permission.

The city of Deir Ezzor joined the Syrian revolution early on, and protestors organized a number of demonstrations against the regime in 2011 and continued until the city emerged from regime control in 2012. After that, many groups in the Syrian opposition and Islamist battalions passed through Deir Ezzor. In July of 2014, the city entered a new stage of its history, when the Islamic State (ISIS, ISIL, or Daesh) declared that it had seized control.

Since then, Deir Ezzor has not been under the Syrian regime’s control, except for the neighborhoods of al-Jourah, al-Qusour, Harabesh, and al-Bogeleyyah, which are home to about 200,000 people. Most of them were displaced from other areas of Deir Ezzor, and are living in tragic conditions, under control of the regime’s forces, who dictate every aspect of their lives, from necessities, access to power, and food.

Since 2014, there have been many operations and clashes between ISIS and regime forces, and now the city’s sky is filled with all types of aircraft. Justice For Life (JFL) in Deir Ezzor, a local organization concerned with monitoring and broadcasting suffering in the city, described the sky as “choked with planes” in one of their reports, comparing it to the seasonal dust storms that hit the city every year and make it impossible to see.

The aircrafts include planes that belong to the international coalition, which claims to target ISIS extremists. Despite this, the largest city in eastern Syria has not had its fair share of coverage or support in the media. Between 70 to 80 percent of the city has been either partially if not fully destroyed, according to a member of JFL. Moreover, JFL recorded nearly a thousand civilian casualties since early 2015. Casualties are due to bombardment from planes belonging to the regime and its allies and international coalition, which have struck numerous sites in Deir Ezzor, and its northern, eastern, and western countryside.

The JFL member said this year the regime managed to retake several sites that ISIS had seized last year, including al-Assad Hospital, the local university, and the cemetery in the heart of the city. When the Islamic State took control of the cemetery, the World Food Program (WFP) suspended aid airdrops it had been providing to civilians. When the regime reclaimed those areas on January 26, 2017, the WFP delivered 15 containers of aid, each carrying 15kg of materials, to those areas, which the United Nations considers under siege by ISIS.

There is an ongoing battle between regime forces and ISIS combatants, as the terrorist group attempts to enter regime-held neighborhoods and centers. The conflict between the two sides intensified on January 13, 2017 when ISIS combatants made a huge advance and seized control of the road between the Deir Ezzor airport and besieged areas. Additionally, ISIS combatants captured Liwa al-Ta’meen, Masaken al-Dhabat, locations on Mount Farda, and the Deir Ezzor cemetery. Even Assad Hospital and the university recently came under fire from the Islamic State.

Despite this, ISIS combatants are retreating in Syria and Iraq. In Syria, the Syrian Democratic Forces advanced to Raqqa after the battle front between the Kurds and Turkey’s Operation Euphrates Shield calmed down. It may take months to defeat ISIS in the battle for Raqqa—especially given that the United States has been increasing its assistance to the Syrian Democratic Forces (SDF), including sending its own ground forces. Analysts see “coordination without direct communication” between the international coalition and the Syrian regime, with the coalition targeting ISIS sites that enable the regime to advance. With the United States focusing on defeating ISIS and increasing its troop presence in Syria, the Islamic State’s days are numbered, which will give Deir Ezzor a new significance in the coming period.

Despite all that is happening in this forgotten city, we do not see the same level of media coverage or political support for Deir Ezzor that other Syrian cities have received. It raises the question of whether activist journalists are responsible for this, or whether the Syrian opposition and modern media that have emerged since the revolution began are responsible.

“Several parties are responsible for the way Deir Ezzor has been neglected,” says Jilal al-Hamad, a human rights activist from the city. “The first is the ‘alternative’ media that emerged since the revolution began, and the Arab media. It seems like it [Deir Ezzor] is not a strategic area and doesn’t have rich media potential; there’s no racial or ethnic diversity like in other Syrian governorates.”

“Secondary responsibility lies with us, human rights activists and journalists. We haven’t been organized or professional in conveying a picture of what’s happening in Deir Ezzor to the world. There have been lots of commendable attempts by activists since the revolution began, but it hasn’t been done in a way that would really convey what’s happening in Deir Ezzor—from crimes, to bombing, to displacement—to local and Arab media. When they engage with it, it’s done in a way to avoid blame, nothing more.”

The description of the city as a non-strategic area appears to be true for international and regional powers. Turkey doesn’t see Deir Ezzor the same way it sees Aleppo, for example. It is far from the Syrian coast that Russia views as strategically critical. The United States does not care about Deir Ezzor as much as it cares about Ayn al-Arab (Kobani) and Hasaka. Meanwhile, the Syrian regime seems focused on keeping its foothold in the area but is not immediately concerned that ISIS controls most oil wells in the Deir Ezzor countryside.

The city’s residents have made numerous attempts to convey a picture of Deir Ezzor in the media, although they have not had much success. According to al-Hamad, the Syrian regime committed a massacre in the neighborhoods of al-Jourah and al-Qusour in late 2012, as well as other massacres in “al-Bouleih, al-Quriyah, al-Hamdeya, Hayy al-Amal, and other areas,” but these were not adequately covered by the media.

Other people feel that Deir Ezzor has been forgotten by the opposition media, which does not pay much mind to regime-held areas, including the neighborhoods currently under siege. It is worth noting that residents of these areas are besieged by ISIS, under the control of the regime and its forces, as well as armed groups supporting the regime such as Lebanese Hezbollah, the Zain al-Abidin militia, Aswad al-Qa’id al-Khalid militia (all supported by Iran), and other armed groups made up of local tribes who are loyal to Assad.

While Deir Ezzor may be neglected militarily and in the media, it has only become more important to the Islamic State. After ISIS suffered losses in Aleppo and Raqqa countryside, and retreated to Mosul and nearby areas, the city grew in strategic importance. It is located between Mosul and Raqqa and has the greatest oil reserves in Syria. If ISIS is defeated in Raqqa, will this forgotten Syrian city become the next capital of the Islamic State?