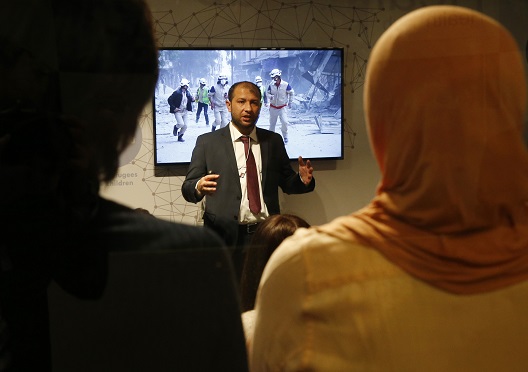 Photo: Attendees listen to Raed Saleh, Head of the White Helmets during his presentation "What is really happening inside Aleppo?" at the Humanitarian Hub during the World Economic Forum (WEF) annual meeting in Davos, Switzerland January 19, 2017. REUTERS/Ruben Sprich

SyriaSource interviewed Raed Saleh, head of the Syrian Civil Defense or “White Helmets” about his thoughts regarding the continued campaign against them, implementing safe zones, and how the last six months has affected their organization with regard to the new US administration as well as the changing dynamics on the ground in Syria.

What do you think about the efforts to delegitimize the White Helmets? Why do you think people are against you?

I don’t think anyone could strip the Syrian Civil Defense of its legitimacy because it gains this legitimacy from the humanitarian work it performs to serve Syrian victims. The only ones who can take away this legitimacy are the Syrian people and citizens of regions in which we operate. We wish we could operate in all remaining regions of the country so that the Civil Defense could obtain complete information and acquire full legitimacy from all Syrian citizens. We aim to provide our services across Syria. For now, we are only operating in the regions we can reach. We do not have any personal enemies, but the Syrian regime and Russia have been spreading propaganda after we presented evidence on war crimes and crimes against humanity they had committed, and because we conveyed the voice of victims to the closed chambers of the Security Council as well as to the United Nations and international institutions that are now tackling the growing criminality in Syria. This called for a large-scale campaign against the Civil Defense to ruin our reputation and distort the image we presented to the world through our humanitarian work and the help we offer to civilians being bombed every day.

What has been the most challenging part of your work and the most rewarding?

The hardest thing is when you challenge yourself and overcome yourself by going to a certain location, knowing that this same location could be bombed in a secondary strike in five or ten minutes and that you could go from being the rescuer to being the victim. This is the hardest part of our job and the biggest challenge we face on a daily basis. Our biggest accomplishment is undoubtedly saving a child from under the ruins after hours of work. It is like finding the treasure you’ve been looking for, and that child is the treasure.

How has the last six months changed the nature of the work for the White Helmets?

The past six months have been really hard, to be honest. We had major media exposure after the movie “White Helmets” won an Oscar and after being named among the world’s most influential people by Time magazine. I was directly targeted and there were attempts at retribution for our success inside Syria. We recently lost many of our members because we are directly targeted. Attacks also increased and chemical weapons were used repeatedly, attacking many of our men. Our work has been very tough, but we are trying to manage this crisis, and to handle the responsibility we have been given.

In regards to safe zones, where do you think they should be located and who should guarantee the safety of these areas and through what means? (air and ground force, logistical support, combat search and rescue) What role would the Syrian Civil Defense have?

We want all of Syria to be a safe zone. We want the Syrian people to be safe. This is what we are working to achieve. However, there are certain regions being targeted by airstrikes. We want to impose a no-fly zone in these regions, and there are several ways to solve this issue. I do not know how this could be implemented, but I do know that military men are laying down strategies to achieve this goal. We do not have any experience in these matters. We believe that the Civil Defense’s role in these regions is to ensure security and safety measures among refugee and civilian groups and help them return safely to their homes.

Given Trump administrations favor with Russia, how do you see the US following up its actions in Syria after the airstrike?

It seems that the US administration does not have a clear policy regarding Syria so far. We hope that the new US administration’s policy in Syria is one that protects Syrian lives and supports a serious political transition to achieve long-term peace.