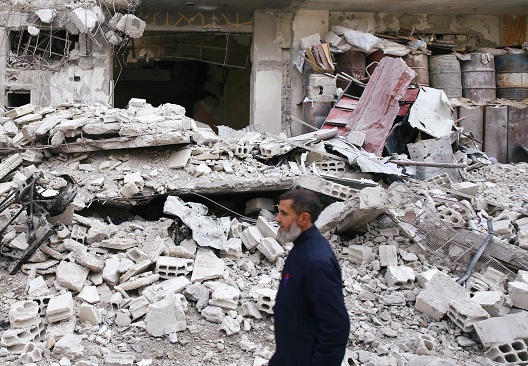 Photo: A man is seen near a damaged building in the besieged town of Douma, Eastern Ghouta, Damascus, Syria February 25, 2018. REUTERS/Bassam Khabieh

Eastern Ghouta is a suburb of Damascus. Before the war, it was an expanding part of the commuter belt where families would settle and travel the short 10 kilometers (6.2 miles) into central Damascus city for work. The original inhabitants from the area would sell their produce from their small farms. In the years since the war began, control of the area has shifted from a mix of opposition forces, and the Syrian regime besieged it in late 2013. Since November 14 2017, the regime escalated its attacks on the population of 400,000 people. Death and starvation now haunt the suburb, with an estimated 11.9 percent of children under five suffering from acute malnutrition because of the drastic lack of food supplies. Although Eastern Ghouta is so close to the capital, the disparity in the price of basic food supplies is stark. Where a kilo of salt sells for 0.50 USD on the streets of Damascus, it sells for 6.50 USD in Ghouta, and a kilo of fruit that goes for 0.50 USD in the capital is inflated to 9.00 USD in Ghouta. The citizens are not just being bombed, they are being starved.

Mohamad al-Abdallah is a 24-year-old photographer who lives under daily shelling with his wife and seven-month-old baby. Mohamad left the relative security of the shelter his family has been living in for the last five days, and stood in its doorway to find a phone connection so we could speak. He began streaming from his phone camera to show me what he calls his “ghost city” and suggested I talk to the few people still daring to walk in the streets.

A very thin man with a pale face approached, keen to speak to me. Abu Firas is 42 years old and has five children ranging in age from one to ten years old. Abu Firas told me he is also taking care of his wounded brother’s children, and the children of his cousin who died. He is now responsible for fifteen children in total, and I asked him how he is coping. Looking exhausted, he replied, “We want food.” I asked about security and if he is frightened. Again he replied, “I want food. I don’t care about death anymore, because we’re going to die anyway. I just want food.”  Abu Firas explained that he has left the children on a farm not far from town. He has the haunted look of a man who does not care any more about life or death. He added, “I don’t want them or my wife to be stuck under a building. If an aircraft strikes I want them to die without suffering.” There’s a family he knows who have been stuck under a building for the last 3 days, people passing by can hear their voices but can do nothing for them. He does not want this fate for his family. “I want to leave them under the sky.”

Soon another man with a straggly beard approached the camera. I expected people to have lost trust in the media’s ability to help them or to save their lives as they once used to believe, but he is keen to talk. Abu Tariq is 37-years-old, but like Abu Firas he seemed older. He had also come out to the streets to look for food for his children. “Sister, I have three children and at this time they are still alive.” Like almost everyone in Ghouta, he had left them in a shelter. I asked him to explain the situation in the shelters. “No one can feel what are we feeling here, all of the weapons in the world are pointing at us.” He continued to explain that many people have died in their shelter because they are make-shift and not able to withstand the barrage of bombs. The regime uses “seismic” or “earthquake” bombs, designed to explode underground and destroy the buildings’ foundations. He could not get food for the last three days, so he started to sell what was left from his furniture, hoping to at least buy bread for his family. He was rescuing people from the rubble yesterday, and says his greatest nightmare is that people similarly might be trying to rescue him tomorrow.

A neighbor passed by, and Mohamad asked him wryly “You haven’t died yet?” He laughed, and I ask him why. “We don’t have anything to ask about these days except death.”

Abu Firas interrupted us to ask me, “Do you want to buy a child? I want to sell one child. I want to exchange one for food.” I was silent for a moment. A tear came to my eye as I thought: what is going to happen to these men and families in the next few days? They looked so despondent and helpless. He seemed to know what I was thinking and said, “That’s desperation my daughter, if I can sell one I can save the others.” Then he said he had to leave.

Mohamad explained that they are cleaning the shelter and told me they have been living there with bad ventilation and nothing but blankets to lie on. There are no bathrooms, no heating, and no food. He told me that 250 people have died in the last three days, and this number is only the people who have been documented.  He added that although he has become a photographer since the beginning of the war, he is too afraid to go farther than his shelter to take pictures. Suddenly, the connection cut off. I was afraid that my drawing them out onto the street to speak to me might have gotten them killed, so I was relieved when Mohammed sent me an audio clip a few moments later. There was no talking, just the sound of missiles, but at least I knew he was alive. A few hours later he sent me a text message saying that all of his aunts who had been gathering in his grandfather’s house had been killed.

Last December, I spoke with Muaz, a 36 year-old working in an orphanage in Eastern Ghouta. Muaz lost both of his two children in the last few years. His daughter was 9 months old when she died in June 2015 and his young son died this past December. Both of them desperately needed medical attention but he was not able take either of them to Damascus for treatment. He told me sadly that his son had been in terrible pain next to him but he could not do anything for him. He could not describe his feelings. In the last few days I sent messages to Muaz, hoping that he and his wife are still alive, but he has not replied. I hope that it is just because it is so difficult to get a connection.

Since November 2017, there has been no evacuation for urgent medical attention. There is no school for the children. Recently, more than five ambulances have been attacked, twenty-two health facilities have stop working, doctors are unable to move to save lives, and hospitals have been targeted. The situation is deteriorating rapidly, and the citizens have all but given up hope. The UN Security Council passed a resolution for a 30-day ceasefire starting this weekend, but the regime and its allies have continued bombing. Iran, a major ally of the Syrian government, has said that the they will not let up on the assault. The citizens of Ghouta will have to hold out in their shelters, desperate for an agreement which will stop the bombs from falling.

Rana Riziq is a Syrian journalist based in Paris.