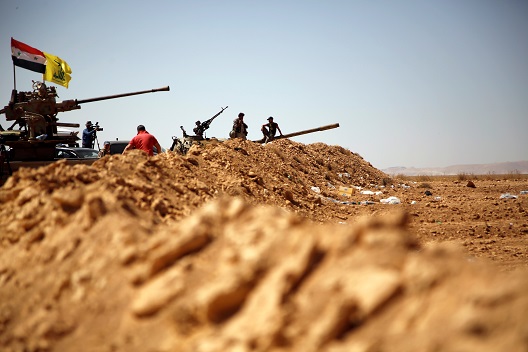 The Syrian war continues to exacerbate long-simmering tensions between Israel and Hezbollah. The situation is further complicated by recurring Hezbollah and Iranian drone surveillance and targeted air strikes along the Israel-Syria border. Neither Israel nor Hezbollah is willing to enter into a protracted conflict; both sides realize that they’ve reached a point of “mutually assured heavy damage.”

Furthermore, Hezbollah’s forces, based in Lebanon, are now overstretched across Syria. Tension between Israel and Hezbollah is unlikely to end, as engaging Israel militarily is a major part of Hezbollah’s doctrine. Its ideological conflict has merely shifted to Syria where—amidst the chaos of international and nonstate actors competing for territorial control—it is likely to continue for the foreseeable future.

Escalations between Hezbollah and Israel are not without their complications, especially among allies. On September 17, Syrian forces responded to an Israeli air raid on its military facilities in Latakia and accidentally shot down a Russian reconnaissance aircraft. According to a Israeli Defense Forces (IDF) spokesperson, the raid targeted facilities “from which systems to manufacture accurate and lethal weapons were about to be transferred on behalf of Iran to Hezbollah.” Ultimately, the attack resulted in the deaths of Russian crew members. Russian President Vladimir Putin called it “a chain of tragic accidental circumstances.” While Israeli Prime Minister Benjamin Netanyahu called Putin to defuse tensions, he also stressed that Israel would not change its overall military strategy to prevent weapons transfers to Hezbollah.

The ongoing conflict between Israel and Hezbollah is rooted in Israel’s invasion of southern Lebanon during the Lebanese Civil War. Marginalized Shia groups joined forces to repel Israel and Western peacekeeping forces; Hezbollah emerged from some of these groups. Iran’s Islamic Revolutionary Guard Corps (IRGC) played a key role in the group’s ascendency, providing it with funding, weapons, training, and organizational advice. Perhaps as a natural consequence of Hezbollah’s growing strength, tensions between it and Israel occasionally escalated into full-scale conflict, such as in 2006.

Today, Hezbollah’s conventional military capabilities are on full display in Syria, where it has thousands of soldiers, numerous commanders, and advisors. These forces are heavily involved in the Syrian conflict, sometimes integrated into units within the Syrian national army to escape Israeli detection. Supported by Russian airpower, Hezbollah fights alongside pro-regime forces and the Syrian army to secure Assad’s survival.

Insofar as it aligns with its own goals—including increasing its political influence and strengthening its military capabilities to use in a future confrontation with Israel—Hezbollah supports Iran’s regional ambitions. Iran and its IRGC-led proxies are intent on preserving the Assad regime, Iran’s long-time ally, as part of the axis of resistance against Israeli and American influence. Iran has long focused on securing an overland corridor connecting Iran to the Mediterranean. As stated by Ali Khedery, an American official who advised all US ambassadors to Iraq from 2003 to 2011, the corridor will allow Iran to move people and supplies along safe routes, leading to the “consolidation of Iran’s control over Iraq and the Levant.”

Hezbollah and the IRGC also use their time in Syria to gain new skill sets and expeditionary capabilities. According to a report, “Iran is developing a new way of waging war beyond its borders, using Syria as the laboratory.” An Israeli military officer supported this argument, saying “I have no doubt that Hezbollah gained much more self-confidence because of the Syrian experience.” Israeli military planners believe that this will make it more challenging to defeat Hezbollah in the future.

For now, Hezbollah and other Iranian elements have allegedly withdrawn from southern Syria. According to a deal between Russia and Iran, Iran will keep its fighters 53 miles from the Golan. Additionally, on August 4, United Nations (UN) peacekeepers returned to the frontier between Syria and the Golan for the first time since 2014 due to escalations on the border. In response to the UN’s presence, Israel announced that it would open its side of the Quneitra crossing in the Golan to allow the UN to resume its activity.

Israel welcomed Hezbollah’s withdrawal from southern Syria as a first step. As noted by some regional analysts, Israel’s leadership prefers a ruthless regime focused on its own survival to the unpredictability of Hezbollah and IRGC-led proxies on its doorstep. Aron Lund, a fellow at The Century Foundation, asserts, “There was a measure of stability and predictability to the way Syria acted under the Assads. That was a good thing, from an Israeli point of view.” During Bashar al-Assad’s rule and much of his father’s, the Golan was relatively quiet; the last major military conflict in the region was in 1974.

Despite these recent developments in southern Syria, Hezbollah and IRGC-led forces remain a potent threat to Israel. As a result, Israel carries out unilateral strikes on Iranian militias and targets Syrian facilities believed to host Iran and Hezbollah, regardless of their proximity to the Israel-Syria border, to hinder Iranian convoys supplying Hezbollah.

Israel takes Hezbollah and Iranian actions in Syria very seriously. It recently launched its largest military exercise in twenty years to simulate a future battle with Hezbollah. This “Light of the Grain” exercise involved tens of thousands of Israeli soldiers and highlighted Israel’s conventional military advantage, achieved primarily through US funding. As stated by David Roberts, deputy director at the Royal United Services Institute (RUSI), “In a very general sense, it’s no secret or cutting-edge analysis that Israel’s military is the best-equipped and best-trained in the whole region.” While Israel fears the indirect involvement of Iranian troops and pro-Iranian militias like Hezbollah along its border, Iran does not have the capability to withstand Israel’s highly advanced ground and air force.

Ultimately, however, Israel’s end game is a complete Iranian withdrawal, and Hezbollah’s recent exit from the Golan is inadequate. While 2006 was the last time Hezbollah launched a massive attack against Israel, activity along the border brings Hezbollah in closer contact to Israel, which Israel cannot abide.

Meanwhile, Israel diplomatically engages with Russia to counter Hezbollah and Iran. Netanyahu met with Putin on May 9, 2018 and said that Russia was unlikely to limit Israeli military actions against Iran in Syria. Russia has an uneasy alliance with Israel, as Israeli air strikes directly target Syria’s allied forces, Hezbollah, and IRGC-led proxies—allies that Russia is less than enthusiastic about, due to their unpredictability, but uses to solidify the regime’s territorial claims.

Hezbollah’s involvement in the Syrian conflict exacerbated the group’s longstanding tensions with Israel, and despite its alleged withdrawal from southern Syria, the situation shows no signs of abating. As long as Iran maintains a presence in Syria, Israel will continue to carry out cross-border strikes. These strikes will likely remain limited and targeted in nature to prevent retaliation from Syria or Iran and its proxies, as well as deflect criticism from the international community. Still, based on past history, an Israel-Hezbollah conflict could draw in additional countries in the region, exacerbating the current refugee crisis and leading to an even larger number of civilian casualties. Greater regional instability may be unavoidable.

Rachel Rossi is an intern at the Rafik Hariri Center for the Middle East at the Atlantic Council.