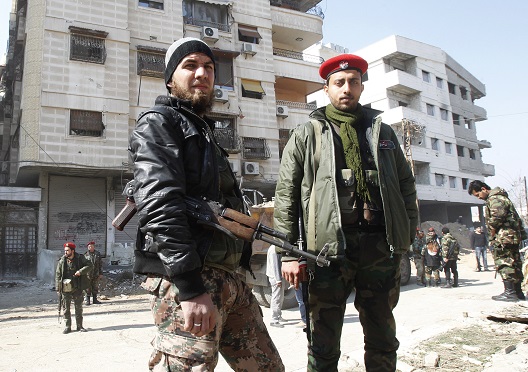 The south Damascus suburbs are not Syria’s most pressing theatre of war. Syrian pro-government forces are busy routing out Islamic State (ISIS, ISIL, Daesh) jihadists in Deir Ezzor, and Islamist opposition from Eastern Ghouta in Damascus. Meanwhile, Russia and the international community are busy trying to monopolize Syria’s future.

But the future of four opposition-held areas of south Damascus, and the areas controlled by regime, jihadist, and Iranian-backed forces around them may give some insights into what is in store for the rest of Syria. A major ceasefire initiative has held one week since its announcement in Cairo on October 12, but a complex local landscape could threaten that now and in the near future.

Despite growing tensions and scattered outbreaks of violence, a tentative de-escalation ceasefire has held one week since the announcement on October 12 from Jaysh al-Islam’s Muhammad al-Alloush that an “initial agreement for [south Damascus] to enter into the ceasefire and ‘de-escalation’ system” would result in “continued opening of crossings in the south of the capital…to allow in humanitarian aid,” along with protections against the kind of forcible evacuations that have gutted several Damascus suburbs since August last year. Last week’s agreement was signed by opposition factions Jaysh al-Islam and Jaysh al-Ababil and a local Hamas-affiliated Palestinian militia known as Aknaf Bayt al-Maqdis. It was brokered under “Egyptian sponsorship and a Russian guarantee,” according to Egypt’s state-owned MENA news agency.

The ‘Cairo Agreement’ covers the last remaining opposition-held suburbs of south Damascus — al-Qadam, Yalda, Babila and Beit Sahem. All have been at a partial truce with the Syrian government since 2014; truces that were supposed to allow for improved humanitarian access rather than siege conditions, and pave the way for ‘reconciliation’ negotiations with the regime. Those negotiations almost reached a conclusion in al-Qadam recently, and forcible evacuations of fighters and civilians were due to begin on September 26 before being “postponed until further notice,” according to al-Qadam’s local council.

A local Jaysh al-Islam leader in south Damascus, Muhammad Saleh, said the agreement will “annex [south Damascus] into the ‘de-escalation’ program, which could pave the way for a ceasefire throughout Syria as a step towards a practical political transition.” The deal will “protect people’s right to stay in their towns, which the regime has recently sought to forcibly evacuate…through ‘reconciliation,’ and stand in the way of the ambitions of Shia militias in the area that want to control [south Damascus].”

The agreement still needs to be ratified by the Syrian government and the various elements that make up the southern suburbs’ opposition administration—including opposition groups, local councils and others who are, as yet, unconvinced that this is the best way to protect civilians’ futures. Some believe that it’s better to negotiate directly with the Syrian government, rather than its allies who may have more of an interest in forcibly displacing fighters and tens of thousands of civilians. Large protests in Babila have made this point recently, preferring direct negotiations with the regime rather than the area be included in the ‘Four Towns’ agreement negotiated between Ahrar al-Sham, Qatar, Iran, and Hezbollah in March this year.

“Preparations for a military operation”

On October 13, less than twenty-four hours after Alloush appeared on TV to announce a deal for south Damascus, Syrian fighter jets launched a slew of air strikes on Islamic State positions, marking the first time the area has seen air strikes in at least a year. Local activists filming the attack from nearby rooftops reported that Syrian jets launched “more than fourteen air strikes targeting residential areas of Hajar al-Aswad,” the Islamic State’s main base in south Damascus.

Some analysts expected a major escalation to follow, with the Syrian Observatory for Human Rights monitoring group warning that the attacks reflected “preparations of [a] military operation that the regime intends to launch at the south of the capital [sic].” Others aren’t so sure. Local media activist and journalist, Mattar Ismaeel, doubted the attack on Hajar al-Aswad would “turn into a genuine military operation,” but admitted that the regime is busy re-asserting its control over south Damascus. “This was a message—directed at us [in opposition-held areas] and directed at ISIS—that the regime can do whatever it wants in south Damascus,” he said.

Saleh, leader of Jaysh al-Islam, also downplayed the potential risks to local stability posed by regime raids on the Islamic State position, instead arguing that the Syrian government wanted to send a warning to ISIS following a string of suicide bombings in al-Maydan in recent weeks. “[Opposition-held areas of south Damascus] haven’t seen escalation or bombing for three years because of a truce in the area,” he said. “The only area that has seen escalation is under the control of the Islamic State, and that came in response to suicide bombings by the group against the regime in Damascus.”

Since Friday’s air strikes, checkpoints closed due to the attack between areas controlled by the Syrian government, opposition groups, and ISIS. Tensions remain high and have translated into violence. On Monday, a civilian was injured in a brief shoot-out at the ‘Oroubeh-Beirut checkpoint that demarcates territory controlled by Jaysh al-Islam (Yalda) and the Islamic State (Yarmouk camp). ISIS purportedly fired a shot, and a civilian later died. Shelling near the same checkpoint also seriously injured a child in Yarmouk this week, but because ‘Oroubeh-Beirut remains closed, the child is reportedly unable to receive much-needed medical treatment. Clashes between opposition and ISIS have continued almost daily since the ceasefire announcement, and local social media channels posted images from the funeral of a Aknaf Bayt al-Madqis fighter on October 23.

Future of the south?

The southern suburbs of Syria’s capital host almost every actor active in the conflict: regime and opposition, pro-government militias, jihadists, and Iranian-backed Shia militias, including Lebanese Hezbollah. The success of any ceasefire may well depend on that complex local landscape that has already secured deals in the area—it’s said that evacuations from al-Qadam were postponed because of risks that ISIS would attack al-Qadam in an attempt to derail the agreement as well as purported threats from Lebanese Hezbollah forces in the area to prevent evacuations going ahead.

Different actors in the conflict—including those purportedly fighting on the same side—want different things. In the meantime, south Damascus is besieged Russian doll-style. A dwindling HTS-controlled north-west corner of Yarmouk camp is besieged by the Islamic State, while the Islamic State in Yarmouk and Hajar al-Aswad is besieged by a mess of pro-government forces that include National Defense Militia forces, Lebanese Hezbollah, pro-Damascus Palestinian factions including Fatah al-Intifada and the Palestinian Front for the Liberation of Palestine—General Command, and a rag-tag militia funded by pro-regime Palestinian businessman, Yasser Qashlaq.

As a group involved in the ‘Four Towns’ agreement, Hezbollah would likely rather see south Damascus tied up with the fates of Fuaa and Kafraya, two Shia areas besieged by opposition and jihadist groups in Syria’s north, and some suggest that Hezbollah and its Iranian benefactors are trying to establish a kind of “southern suburbs project” that would see a Shia stronghold in the south of the capital similar to Beirut’s Dahyeh. With the enormously significant Sayeda Zeinab shrine not far away, both Hezbollah and Iran can be said to have plenty of vested interests in the area.

Image: Photo: A member of Syria's armed opposition forces (L) stands next to a soldier from the forces loyal to Syria's President Bashar al-Assad in Babila town, southeast Damascus after a local ceasefire agreement was reached. Photo taken February 17, 2014. Taken by Khaled al-Hariri.