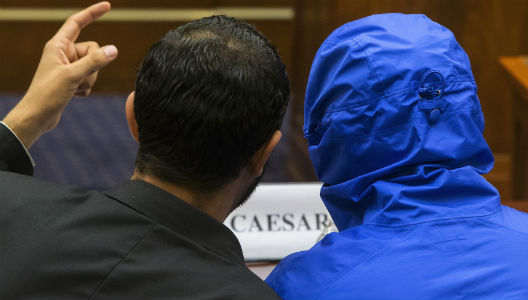 Photo: The man credited with smuggling 50,000 photos said to document Syrian government atrocities, a Syrian Army defector known by the protective alias Caesar (disguised in a hooded blue jacket), listens to his interpreter as he prepares to speak at a briefing to the House Foreign Affairs Committee on Capitol Hill in Washington July 31, 2014. REUTERS/Jonathan Ernst

On July 12, 2016, Representative Eliot Engel of New York introduced H.R. 5732, the Caesar Syria Civilian Protection Act of 2016. This bill uses sanctions to put pressure on the Syrian government and anyone supporting it to stop committing war crimes and crimes against humanity. The Syrian government, empowered with support from Iran and Russia, has pursued a strategy of targeting civilians to eliminate any opposition to its rule, including arresting anyone who opposes it. The Syrian Observatory for Human Rights has reported the deaths of 60,000 people in prisons since the start of the conflict. The Syrian government is the main aggressor in a conflict that has resulted in at least 400,000 dead and 14 million Syrians displaced; between 2011 and 2015, the Syrian Network for Human Rights attributed 96% of civilian deaths to the Syrian regime. Additionally, President Bashar al-Assad has blocked United Nations humanitarian aid from reaching the intended recipients.

Who is Caesar?
Caesar, who uses the pseudonym to remain anonymous as a way to protect his family, defected from the Syrian military in 2013. He worked as a crime scene photographer for the Assad government after joining the military, years before the current conflict began. During the conflict, his role shifted and he was placed in military hospitals, where he would take photos of corpses as they were being taken out of the medical facilities. As the conflict escalated, so did the number of bodies he would photograph each day. Photographing the torture and rising death toll from these hospitals began to change his attitude towards the regime and in 2011, he decided to start collecting the photos. By 2013, with help from the opposition, he faked his own death and defected from the Syrian military.

When he fled in August 2013, Caesar had collected over 53,000 photographs of detainees who had been tortured and killed while in these military hospitals. He handed these photographs over to an anti-government political group, the Syrian National Movement, who then distributed the photographs to other groups, including Human Rights Watch (HRW). With these photographs, HRW “found evidence of widespread torture, starvation, beatings, and disease in Syrian government detention facilities.” Additionally, they were able to identify 27 prisoners through identifying marks such as scars and tattoos as well as evidence from former detainees. Both Caesar and his photographs helped identify the locations of several military detention centers and understand the code used to identify the victims.

These photographs have been shown in several different public spaces, including the United Nations Headquarters in New York City and the United States Holocaust Memorial Museum in Washington D.C. With the conflict in Syria in its fifth year, the U.S. House of Representatives introduced a bill intended to punish the Assad regime and its supporters and based it on both Caesar’s photographs and his testimony in front of the House Committee on Foreign Affairs this past July. The photographs and testimony show a clear connection between the reported human rights violations and the Assad government, legitimizing the bill and giving clear evidence to the international courts if President Assad stands trial for international war crimes.

Key Aspects of Bill
As mentioned previously, the Caesar Syria Civilian Protection Act of 2016 essentially intends to punish both the Syrian regime and any actors, what the bill refers to as a “foreign person,” who support its human rights violations by imposing sanctions on them. This support can be in any capacity, such as economic or military support. The sanctions must follow the International Emergency Economic Powers Act to “freeze and prohibit all transactions” that come within the interests of the United States. The bill consists of five titles that explain the actions that require sanctions, an amendment of the Syria Human Rights Accountability Act of 2012, the maintenance of reports on Syria, when sanctions can be lifted, and those in charge of regulating the bill.

Title One outlines a broad set of actions of support to the Assad regime that require sanctions and states that sanctions can be imposed on individuals even if they are not affiliated with a government. In general, any kind of economic or military support requires sanctions, including sending financial aid, arms and artillery support, selling aircraft or aircraft spare parts, or selling oil to the Syrian government. This section discusses what those sanctions entail—the enactment of the International Emergency Economic Powers Act if the actor is a government. Individuals can also become ineligible for a visa to the United States or have their visas revoked.

Title Two amends the Syria Human Rights Accountability Act of 2012. There are two main points laid out in this section. The first is that sanctions will be imposed on those who commit human rights violations against Syrians and their families. The second states that those who transfer goods and technology into Syria with the intention of using them towards committing human rights abuses will be subject to sanctions. The sanctions imposed on these actors are the same as in Title One.

Title Three requires that Congress must be updated by the President and on three different subjects. The first is that the Secretary of State and the administrator of USAID submit a report on the monitoring and evaluating of assistance programs in Syria. Second, the president must submit a report that lists all of those responsible for human rights violations in Syria. The third report will assess the potential effectiveness and requirements of both safe zones and no-fly zones in Syria and submit the findings to Congress. The last section requires that the US will support those who are investigating war crimes and crimes against humanity committed in Syria.

Title Four states that the president can suspend sanctions either when negotiations fail to reach an agreement or when negotiations do end in an agreement. The first case is applicable if he finds significant evidence towards ending the conflict, such as the suspension of attacks against Syrian people as well as the release of political prisoners. If negotiations end in an agreement, the former conditions have been achieved, and the suspension of sanctions is necessary for the success of the agreement, the president also has the right to suspend sanctions.

Title Five requires that the President must enforce this bill within 90 days of enactment and states that the terms of the bill will end on December 31, 2031.

Brittany Keroack is an intern at the Rafik Hariri Center.