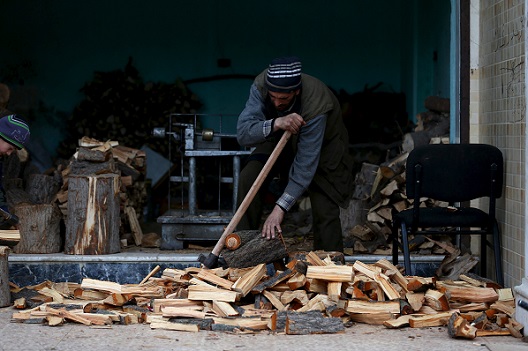 The Assad government has long neglected Syria’s environment and natural heritage in favor of actions that have short term gains but that have increased the rate of desertification and ruined agricultural land. The civil war has created a new set of problems: lack of protection for reservations, increased smuggling encouraged by a lack of law and order and government policies aimed at currying public favor, and the destruction of land as a military tactic.

Before the revolution, Syria’s natural heritage was managed in a simplistic and shortsighted way. In cases including that of the Iris Damascena, the government declined to protect arid lands with rare flora species. The Iris is a rare flower species that only grows on mountains north of Damascus. Field research in 2011, the last time a field study was conducted on the plant, declared it as highly endangered. Despite its rarity and proximity to Damascus, the government never gave the plant any kind of protected status. The only factor that protected it was its location near the Qassioun Republican Guards Military Base and other military facilities, which put the whole area off limits to civilians.

Declaring protected areas was the duty of the Ministry of Agriculture and Agrarian Reform (MOAAR), which announced the first ever protected area in 1994. The MOAAR based its decision whether or not to declare a protected area based on vegetation density, paying little attention to biodiversity. MOAAR designated thirty specific areas as protected, but neglected many other areas that needed protection. The MOAAR’s designations did not take into consideration international classifications and methods of conservation. Hence, even if an area had a rare plants species, MOAAR would not declare the area protected if there was no woodland.

The MOAAR set top-down policies to deter people from violating protected woodlands. It banned local communities from using the land and punished any violation with a fine instead of teaching communities how to utilize the resources for farming and grazing in a responsible, renewable manner. The lack of local involvement in managing these areas caused hostility among the local population towards conservation, which was perceived as a tool of government control.

In May 2011, the Syrian regime’s Ministry of Local Administration and Environment issued a law that allowed people to build on land zoned as agricultural. Previously, building on agricultural land was illegal, however the practice occurred through bribery and political connections. The new law aimed to control illegal activity by moving it into the legal sphere. However, the government’s habit of turning a blind eye to violations to gain public favor prevented the law from being properly implemented. Huge blocks of informal settlements were built near riverbeds and on agricultural lands and began encroaching onto woodlands. According to a pro-government news website Syria Steps, the number of encroachments on agricultural land and woodlands from March 2011 to August 2011 equaled the number of violations over the preceding three decades. The article blamed the expansion on people “making use of the circumstances,” referring to exploitation of a lack of law and order following the 2011 revolution. However, the government also allowed people to build on the land to gain favor and reduce public pressure as it channeled its energy and resources to stopping protests.

A combination of factors has led to the destruction of the ancient Pistacia Atlantica trees and Pistacia Khinjuk trees in three areas: the Bilas Mountains east of Hama, the Abdulaziz Mountains south of al-Hasaka, and the Abu Rejmain Mountains north of Palmyra. People began cutting down the trees to use them as an alternative to increasingly expensive fossil fuels for cooking and heating. Although it has not been studied in Syria, studies have shown that smuggling of natural heritage, including timber and animal parts, is a significant source of income for extremist groups and criminal networks. In Afghanistan, an article published in The Journal of Sustainable Forestry found that insurgent groups were smuggling timber and shipping it as far away as the Gulf. In Syria, timber smuggling has clearly become a strong market—hundreds of thousands of trees have been logged across the country, including in agricultural areas located in contested territory and in the vicinity of besieged populations.

Pictures showing the distribution of Pistacia trees in the Bilas Mountains in 2010 (top) and 2014 (bottom). The dark dots on the top picture are the trees, which have been almost entirely cut down and used for heating and cooking.

Shelling has destroyed huge swathes of coastal forest, while fighting parties cleared areas on the frontlines as part of military tactics. Regime forces and armed groups cut down and burnt hundreds of hectares of woodland, much of which was then sold as a source of income. According to a member of Latakia’s opposition local council, the regime burned about 70 percent of rebel controlled forests by systematically shelling the areas. The small Euphrates river islands known as Huwajat faced the same fate. Once populated with dense vegetation and rare species, regime forces shelled the islands in 2012 to flush out army defectors who were hiding there. More recently, local farmers in need of land and income converted these islands to agricultural farmland. Prior to the 2011 revolution, while tactics of burning, logging even partially burnt trees, and converting land to farmland were a common practice linked to corruption, such tactics were more contained and limited.

Natural heritage in Syria is being damaged, and in some cases lost forever, as a result of the war. The combination of the Syrian regime’s corrupt and shortsighted policies and indiscriminate shelling of opposition territory is wiping out huge swathes of land. A lack of good governance has created a state of anarchy, in which all sides have sought to profit by taking advantage of natural resources such as timber. The desperate need for fuel and food has led Syrians to prioritize logging and farming over conservation. The continuous instability and fighting make it difficult, and sometimes irrelevant, for the local population and civil society to start conservation initiatives, because the long term benefits and sustainability of such initiatives are not readily clear. However, the destruction of environment, abuse of land, and increased desertification are problems that, even before the war, were leading to unemployment and a disgruntled public. Any future peace in Syria depends on the government’s ability to promote environmentally sustainable policies.

Amr al-Faham works at Syria Recovery Trust Fund. He has worked at different international and regional organizations in Syria, Iraq, and Turkey. He holds a masters in resource and environmental management from the Lancaster University and a Bachelors in civil engineering from Damascus University.