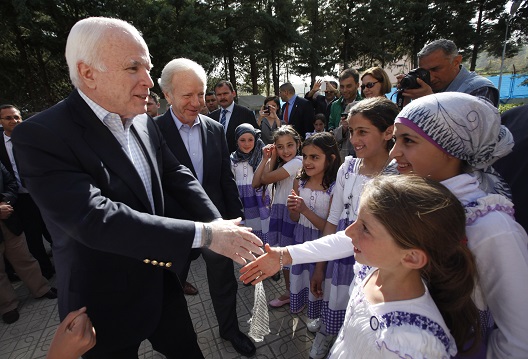 The Arab Spring forever altered the lives of Syrian-Americans. The community now refers to life before and after the start of the Syrian revolution. Initially, the infectious energy from al-Assi Square in Hama and Tahrir Square in Cairo captured hearts across the world and triggered supportive policy measures from governments. It was only a couple of years before the enthusiasm turned into heartache and horror.By mid-2013, few US policy makers wanted to stake their professional careers on increasingly beleaguered democratic movements in Cairo, Misrata, and Homs. Senator John McCain was one of the few that did not shy away from the challenge, especially in Syria, where he emerged as a singular champion of the cause of freedom in public, behind closed doors, and even on the ground in Syria itself.

When McCain passed on, many Syrians and Syrian-Americans mourned the loss of one of the few public figures who believed their revolution was worth living and dying for. His death comes on the heels of what has been a brutal few months for Syrians opposed to the Assad regime: death certificates issued by the regime confirming the torture of thousands of detainees, the unexpected death of the brilliant actress and brave advocate May Skaf, and the regime’s reclaiming of Daraa, the birthplace of the revolution. It seems that for the foreseeable future, Syrian President Bashar al-Assad will remain in power, thanks largely to his Iranian and Russian allies.

Beginning in the Spring of 2012, Senator McCain used his time on the senate floor repeatedly to jolt the United States into action as one Syrian city after another was annihilated by first Syrian, then Iranian, and then Russian forces. He stated that, “Syria today is the scene of some of the worst state sponsored violence since Milosevic’s war of crimes in the Balkans or Russia’s annihilation of the Chechen city of Grozny.”

And although he initially gave former US President Barack Obama’s administration credit for orchestrating severe international condemnation and sanctions on the Assad regime, McCain stated clearly then—and continued to advocate for the remainder of his life—that this was insufficient and disconnected from the reality of the armed conflict on the ground.

In 2014, he went against political and military convention by calling on the provision of anti-aircraft weapons to protect civilians under fire: “And to stop these atrocities I’m willing to take the risk of a MANPAD. . . falling into the wrong hands, because we’ve got to stop it.” He blasted US inaction as regime forces turned Syria’s largest city of Aleppo into a killing field in 2016, stating, “the name Aleppo will echo through history…as a testament to our moral failure and everlasting shame.” The following year, only hours after breaking news of the cancer that would end his life, he criticized President Trump’s decision to cut support to Syrian rebels.

When Syrian Americans first started to advocate on the Hill in 2012, very few offices opened their doors for them. If they did, junior staff met with doctors—that came directly from saving lives in Syria—to plead their case. Many in the community found it disheartening and shocking.

But Senator McCain was different. He took time to meet with as many Syrians as he could to hear their accounts first hand, even when the community was still fairly new at advocating. For several years, he received Syrian activists, journalists, and doctors from the smallest villages in Idlib and Damascus in his office. Syrian visitors were often amazed that while their own president, Bashar al-Assad, refused to meet with them, a high-ranking representative from the leading world superpower did.

McCain kept close at hand reminders of the Assad regime’s war crimes in Syria. In his office, one could see pictures taken by “Caesar”, the defected regime military photographer who fled Syria with photos documenting 11,000 men, women, and children that starved, tortured, and were mutilated by the regime. The photos were provided to him by members of the Syrian American community during a meeting between McCain and “Caesar” in mid-2014. McCain was interviewed soon after this meeting and remarked of the photos, “I look at them on my desk every day. They are horrifying. They remind me not to give up. Until the last Syrian rebel is standing, I will do everything I can to help them.”

Traveling to the Conflict

Senator McCain also visited Syria multiple times to lend moral support to those struggling for freedom on the ground. He was the highest ranking American official—and the only US Congressman—to enter Syria to meet with US-backed Free Syrian Army rebels since the start of the conflict. He came back a fiercer advocate than before, countering skeptics of arming the Syrian opposition by citing his personal ties to the rebels.

McCain made a second secret trip to Syria in February 2017, meeting with US troops and US-backed Syrian Democratic Forces as they pressed an assault on the Islamic State (ISIS) capital of Raqqa. As many press outlets noted at the time, this visit was a clear counterpoint to a regime-sponsored trip by Senator Tulsi Gabbard the month before that included a meeting Assad. In contrast to Gabbard’s call for the US to accept Assad under anti-interventionist logic, McCain had a different vision in which the US would continue to support alternatives to the regime.

But perhaps the most notable McCain trip was one that never happened. In early 2016, he reached out to the Syrian American community and asked for them to arrange a second rebel-led trip into Syria for him—this time to visit opposition areas in the city of Aleppo, which was then at risk of falling to the regime. When informed that his safety from regime and Russian airstrikes could not be guaranteed, McCain indicated that he was willing to give his life if that was what it took to prevent the Russian-backed slaughter that ultimately took place in Syria’s largest city.

Senator McCain was not without his flaws. He has been widely criticized for supporting the Iraq War and his mixed record on torture—criticisms that he himself later vindicated by publicly denouncing his actions. But whatever McCain’s shortcomings, he showed a clear willingness to do whatever it took to stop Assad’s atrocities in Syria at a time when few others would.

Serving over three administrations, McCain was a rare voice of truth and courage in a room full of skeptics. Today, he is honored and remembered by the Syrian American community for his perseverance. “Americans never quit. We never surrender. We never hide from history. We make history.” If the Syrian American community can continue to come together for the difficult road ahead, Senator McCain’s sacrifices will not be in vain.

Suzanne Meriden is the Executive Director of the Syrian American Council. Suzanne Meriden hails from Southern California where she began her activism during her college years, and more recently left a corporate retail career to focus on Syria. Follow her on Twitter: @suzannemeriden.

Jomana Qaddour is a doctoral student at Georgetown Law School and co-founder of Syria Relief & Development. Follow her on Twitter: @jomanaqaddour.