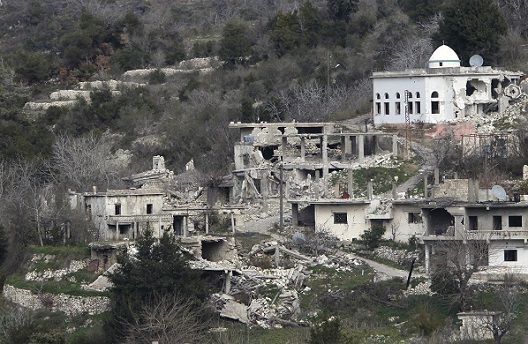 (Photo: Reuters. A general view shows damaged buildings in the town of Rabiya after forces loyal to Syria's President Bashar al-Assad recaptured the rebel-held town in coastal Latakia province, Syria January 27, 2016. Syrian pro-government forces recaptured a key rebel-held town in coastal Latakia province on Sunday, building on battlefield advances in the area ahead of planned peace talks this week in Geneva between Damascus and Syria's opposition. Picture taken during a media tour organised by the government. REUTERS/Omar Sanadiki)

Without doubt the High Negotiations Committee of the Syrian opposition will authorize and direct its delegation to go to Geneva to engage in indirect “proximity talks” under the supervision of UN Special Envoy Staffan de Mistura. Whatever burdens have been borne by this opposition for the better part of five years, it simply cannot risk being blamed for the collapse of a diplomatic initiative spearheaded by an otherwise empty-handed United States. Whatever disappointments the opposition has experienced over the years from the mismatch between administration words and actions, it simply is not in a position to alienate Washington. As it did two years ago in Geneva, the opposition will mount the gallows of Syrian public opinion and hope the hangman overslept.

From the beginning of the Syria crisis, those who rose against the incompetence, corruption, and brutality of the Assad regime have suffered from a friendship deficit. Washington’s desire to see Assad gone was and remains somewhere between wishful and advisory in nature—no match for the material determination of Tehran and Moscow to keep their client indefinitely in power in at least part of Syria.

The Obama administration sought, for its own domestic political purposes, to camouflage this fundamental imbalance with rhetoric about red lines and people stepping aside. It sacrificed its own reputation and credibility in the process. Iran, on the other hand, used its Lebanese militia to save Assad militarily in 2013. Russia has been employing its air force to save Assad since the fall of 2015. The American response to the strategic, diplomacy-shaping actions of others has been plaintive: surely Assad’s friends know what an asset he is for the Islamic State  (ISIL, ISIS, Daesh); surely Russia and Iran know that ISIL is our common enemy; surely Moscow and Tehran will work with us to put Assad to the side so Syrians can unite against ISIL; surely they know what a mistake they are making by intervening militarily. To speculate on how all of this is processed in the Kremlin, Tehran, and Damascus is to invite clinical depression.

One can be as critical as one wants about the performance to date of the external Syrian opposition. Indeed, it is infinitely easier for senior American and UN officials to take a didactic tone with the High Negotiations Committee than it is to confront Russian President Vladimir Putin or Foreign Minister Sergei Lavrov about their actions or those of their client in creating a rising toll of death, destruction, displacement, and terror among Syrian civilians—all of which benefit ISIL and all of which make creative diplomacy and compromise impossible. It is easier to lecture the Syrian opposition about its responsibility to engage in a dialogue than it is to corner Iran’s president—now doing a “come and sell stuff to Iran” victory lap through European capitals —about Tehran’s role in facilitating war crimes and crimes against humanity in Syria.

The Syrian opposition is, to be sure, organizationally challenged. It is fractious. It cannot defeat Iran, Russia, and the regime inside Syria. Its ability to protect its own constituents is very limited. If airdropped tomorrow onto a welcoming Damascus it might, while eschewing collective punishment and mass murder, still prove lacking in governing skills. But this oft-reviled opposition wants Assad—an asset for ISIL and a tool of Hezbollah—gone. Is this not a basis for a close relationship with Washington? Are these people neither worth cultivating nor treating with respect?

And for all of their defects they are neither blind nor stupid. They see Russians and Iranians killing armed Syrian rebels and civilians alike for the sake of preserving a useful client. They know that the greatest power on earth—the United States of America—has protected not a single Syrian inside Syria from the depredations of the Assad regime or its allies—not a single Syrian. And now they are being told exactly what they were told in 2013, before the Geneva conference fiasco of January 2014: come to Geneva, engage in dialogue, help the world see who is serious about this process and who is not, and we will be with you if the other side does not deliver.

There are two missing ingredients in the relationship between the US government and the Syrian opposition: trust and confidence. Evidently some of what Secretary of State John Kerry said days ago to the General Coordinator of the High Negotiations Committee, former Syrian Prime Minister Riyad Hijab, was misunderstood and/or deliberately misrepresented to the media by some of Kerry’s listeners. The Department of State has moved rapidly to refute allegations that Kerry was essentially presenting Russian talking points. Did the American side care enough about the audience to insure that the words it used were measured carefully and clearly understood? Was the Syrian side—on the basis of past performance—predisposed to hear something that simply was not said? How can this relationship be so lacking in basic trust and confidence? Who was it, after all, that the United States recognized in December 2012 as the legitimate representative of the Syrian people?

If the Obama administration wants the Syrian opposition to risk whatever positive standing it may have inside Syria for the sake of a diplomatic due diligence exercise aimed at proving to the world that which is already known—that the Assad regime, Russia, and Iran have no interest in genuine Syrian political transition—then it will have to sit with the opposition and spell out what it intends to do to protect Syrian civilians once the exercise has run its course. The course itself need not be lengthy. If the bombings, sieges, and mass incarcerations continue, there is nothing to discuss—it is, as Special Envoy Staffan de Mistura told the UN Security Council on January 18, just another trip to Geneva. If the Assad regime does not accept the terms of reference embodied in the June 30, 2012 Geneva Final Communique, there is nothing to negotiate. It will just be a repeat of Geneva, January 2014.

On January 27 the following exchange, which did not escape the attention of the High Negotiations Committee, occurred during the Department of State daily press briefing:

QUESTION: And the—and at the same time, the Russians and the Syrians are providing additional support to the fight, or to their side of the fight. At what point does the United States decide that this test may be—that they failed the test and decide to increase—to increase pressure or change the balance of power on the ground in support of the people that the Americans are supporting?

MR TONER: Sure. I think that’s a very valid but also very difficult question to answer. I would say we’re still committed—strongly committed—to seeing this process move forward. We feel like, since really this process began and has taken shape throughout the autumn, that we have gathered a little momentum here, that we have moved the parties together in the sense of having these talks, and that we’ve got to keep that momentum going.

In the immortal words of the late Peggy Lee, “Is that all there is?” Because if that’s all there is—if the Obama administration is just going to keep on dancing for the next twelve months-minus—2016 will be a very bad year indeed for Syrians, their neighbors, Western Europe, and the United States. The Syrian opposition will, with much apprehension and dread, play the role it has been asked to play in helping to reveal the obvious and unveil that which is already plainly visible to those who elect to see. It is, after all, the weakest of the actors. It continues to hope that the strongest will emerge from hiding behind the curtain and appear, at last, center stage.