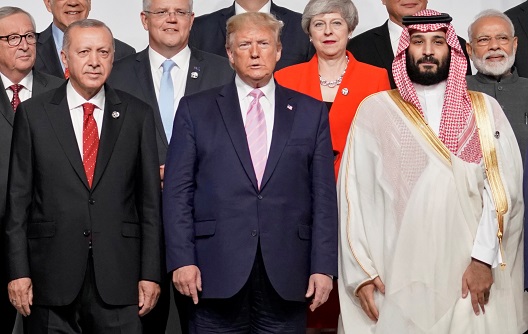 Lost in non-stop, explosive domestic American political dysfunction and controversy was a July 16, 2019 statement by President Donald Trump reiterating his December 19, 2018 determination to quit Syria quickly and completely. Here are the precise words, spoken at the White House:

This statement could mark the end of administration efforts to walk-back the presidential tweet of December 2018. The walk-back was essential, as victory over ISIS (ISIL, Daesh, Islamic State, IS) could be sealed and confirmed only by stabilizing liberated territories and neutralizing thousands of ISIS operatives still on the loose. Now President Trump seems to have reasserted his wishes as commander-in-chief. But will the president’s words be taken by senior officials as directive in nature?

The question itself is extraordinary. Americans have been conditioned to believe that presidential words on major foreign policy issues are dispositive. Has Donald Trump broken new ground? Is it possible that his statements about leaving Syria quickly are meant to appease a political base (and commentators associated with it) and not guide foreign policy decisions or their implementation?

In December, when he (prematurely) announced victory over ISIS and identified the extremist group as being “the only reason for being there [Syria] during the Trump Presidency,” a firestorm of bipartisan criticism erupted. Indeed, it seemed that only the Kremlin, Tehran, the Assad regime, and a handful of American isolationist commentators praised the decision. Had it been implemented, over four years of war on ISIS would have been wasted, nearly instantly. Syrian partner forces would have been unceremoniously abandoned. And thousands of at-large ISIS terrorists would still be on the loose, some trying to restore the “caliphate” and others offering their services to the Assad regime and Iran.

The administration—presumably with some buy-in from the president—tried to roll the announcement back. Yes, there would be a reduction of American ground forces in territories liberated from ISIS. But no “out of Syria” date was set, and allies (the United Kingdom, France, Germany and others) were asked to contribute forces to replace a reduction in American boots. It was a hard sell. Allies were asking an uncomfortable question: Given the president’s December 2018 statement, is he truly committed long-term in Syria to the enduring defeat of ISIS? In the case of the UK and France the response seems to have been satisfactory: they recently announced modest increases in their respective force levels. Berlin, however, declined.

And now President Trump is on-the-record again, seemingly eager to sacrifice American leverage in Syria for precisely nothing; leverage that could, if properly exercised, produce an alternative in a major part of Syria to Iranian-and-Russian-supported Assad regime state terror and pave the way to meaningful peace talks.

But does the president mean what he is saying? Is it really his intention to give Russian President Putin, Supreme Leader Khamenei, Bashar al-Assad, and “Caliph” Abu Bakr al-Baghdadi something for nothing?

Perhaps not. During a time of undoubted domestic political stress Mr. Trump may be putting first things first politically: assuring his electoral base that he meant it when, during the 2016 election campaign, he promised to “bomb the hell” out of ISIS and get out of the Middle East. For people who believe that 7,000 miles is sufficiently distant to deter transnational terror bubbling out of a place like Syria—a proposition seemingly disproved on 9/11/2001—the president’s words of July 16, 2019 may have been reassuring. But did the president intend to set and implement policy?

Veterans of the Vietnam War—an admittedly disappearing breed—will recall a genre of jokes beginning with the words, “What the captain really meant to say…” Over the coming days we may hear words from senior American officials along the lines of “What the president really meant to say.” We may well be assured that there is no change in policy: that the words “pretty soon” do not mean “very soon,” and no deadline has been set; that the administration has no intention of presenting enemies of the United States a gift-wrapped thirty percent of Syria liberated from ISIS and rich in oil and agriculture; that Washington recognizes that the failure to stabilize liberated lands properly would resurrect ISIS and lay waste to nearly five years of effort; and that the abandonment of partner forces—notwithstanding understandable Turkish criticism of the partnership—is just not on.

These reassurances would be widely welcomed, even if they would confirm and illustrate a troubling debasement of presidential pronouncements. Will they suffice? Will allies and partners be certain of American steadfastness? Can American officials genuinely claim to know the commander-in-chief’s intent? President Trump may not wish to make Iran’s day by gifting northeastern Syria to it, Russia, and the Assad regime. But his words—inadvertently perhaps—seem to suggest otherwise. They make life more difficult than it needs to be for senior administration officials working very hard to secure American interests.