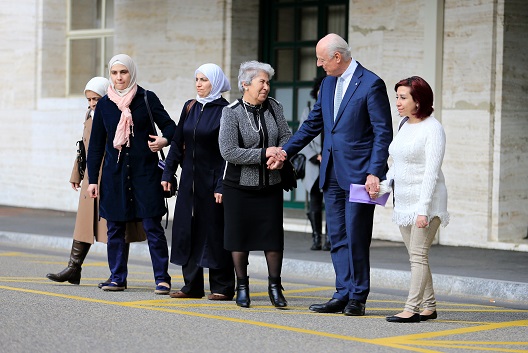 Eight years and many conferences into the Syria conflict, Syrian women still struggle to have their voices heard in decision making forums that directly impact them as citizens, and as political, economic, and civil society actors. Syrian women present at the western male-dominated EU-UN conference, Supporting Syria and the Region—known as Brussels II—in April 2018, explicitly spoke to the political processes that failed to include them, and to an aid industry that did not address their needs, including in protection from violence.
Violence is not only a source of trauma to women, but it also limits their access to the public space, and as such, is a concern to all those who believe in the ability of women to contribute to durable peace. As an international community we must step up our support for women-led initiatives and organizations, in addressing the everyday violence and discrimination that they experience, and to ensure that women’s participation in political processes is a non-negotiable condition for conflict resolution across the world, and especially in Syria.

Engagement in the Political Process

Women continued to be vastly outnumbered in official negotiating delegations in the UN-led intra-Syria talks, comprising 15 percent (four of twenty-six) of the opposition and government delegations at the December 2017 talks in Geneva, and absent from the Astana process. In the recent Russia-led Sochi conference, estimates by UN Women suggest that roughly 10 percent of the participants present were women.

Multiple studies examining women’s contributions to peace and security around the world demonstrate the positive correlation between women’s engagement and peace making. Statistically robust data finds that women’s participation in peace negotiations makes any resulting agreement 64 percent less likely to fail and 35 percent more likely to last at least fifteen years. It also makes it significantly more likely that an agreement will be reached.

This fact is recognized by Staffan De Mistura, the UN Special Envoy for Syria, who recently committed to ensuring women’s direct representation in adequate numbers in any upcoming intra-Syria talks. Yet De Mistura alone cannot guarantee this; it is the responsibility of national and international actors to support him and women’s rights actors in meeting this commitment, and to hold all stakeholders accountable for ensuring women’s representation.

Inside and outside Syria, women continue to pay a disproportionate price for the conflict, including through sexual and gender-based violence as detailed by the UN’s Syria Commission of Inquiry; a traditional war tactic to instil fear, humiliate, and punish to enforce social order. Gender inequality and discrimination serve as the foundations for this violence, by creating a culture in which violence against women is both assumed and accepted.

The Syrian conflict exacerbated gender inequalities and the risks of violence for both women and men, though disproportionately for women and girls. Increased societal violence and a breakdown of the rule of law has come hand in hand with increased violence against women. As examples of this, it is estimated that 75 per cent of young girls living in camp settings inside Syria do not go to school for fear of sexual violence. This not only impacts their access to public space and education, but to future employment, while increasing their isolation and heightening their long term risk to gender-based violence. A report prior to conflict in 2011, by the United Nations Population Fund showed that one in three Syria women faced domestic violence; this number has risen sharply with violence and displacement. A more recent report in 2017 by the UN High Commissioner for Refugees (UNHCR) and  UNICEF the UN children’s agency, states that more than half of Syrian refugee women interviewed living in Jordan stated that they are forbidden from leaving home without male chaperones due to safety and economic reasons.

Additionally, according to UN data economic hardships and security risks from the conflict encourages child marriage, which has becomes an economically sound solution and security measure for girl’s ‘safety.’ Child marriage is a human rights violation which prevents girls from fulfilling their potential, and can lead to early school drop-out and exclusion from the labor market.

These and other forms of violence permeate the daily lives of Syrian women and girls living in and outside of Syria. Violence increases with displacement and adds to the challenges of existing structural and cultural discrimination that Syrian women have traditionally faced in their families and communities.

But challenging existing social and patriarchal norms is also a trait of this conflict, as demonstrated by the immense resilience of women inside Syria and in refugee communities, in the face of displacement, dispossession and violence. Syrian women present in the Brussels II conference and in many other forums bring to the discussions the voices of their counterparts working in and around Syria. They speak in the name of women and girls that have taken up the roles of breadwinners, activists, relief workers, and local peace mediators.

While there is general consensus among aid practitioners that women and women-led organizations have easier access into conflict affected communities, recent available data shows only 0.3% of international funding in response to the Syrian crisis went to Syrian led organisations in 2014. Moreover, in 2015, only 0.5% of global funding for humanitarian action went to projects targeting violence against women in 2015.

Female respondents to a survey by Swisspeace, a peace research institute state that “the public space for women has shrunk due to the militarized environment,” something that was obvious with the quasi absence of women in Sochi. But respondents within the same survey also highlighted the role of women in relief and development work, human rights activism, and mediation. “Women are finding creative ways to promote peace in broader society and are effectively utilizing the spaces they can access despite the barriers,” said the survey.

At Brussels II, governments pledged a cumulative $9 billion for the humanitarian response to support Syria’s countries neighbouring. To meet the demands of Syrian women, at a minimum a target of at least 15 percent spending for gender equality and women’s empowerment—similar to the target set by the UN for its peacebuilding spending, must be applied to all international support.

Moreover, an end to violence in Syria is not possible without addressing gender inequality and discrimination, which must be tackled, as a first step, in two concrete ways: by ensuring women’s participation in brokering peace, and by ending gender-based violence—both in the public and private sphere. For this, the international community must invest both in programing that addresses gender equality and women’s needs, and in Syrian led women’s organizations to deliver effective responses to discrimination and violence. This must be combined with expending political will and capital to ensure women’s direct representation in Syria’s peace process.

Image: U.N. mediator for Syria Staffan de Mistura meets a group of women whose family members have either been detained by Syrian authorities or abducted by armed groups, or simply missing, outside the United Nations office during the Geneva IV conference on Syria, in Geneva, Switzerland, February 23, 2017. REUTERS/Pierre Albouy