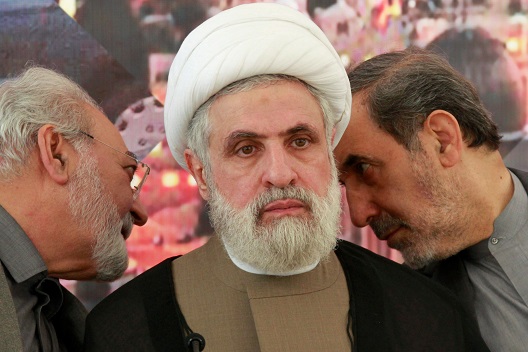 In a recent interview with Al-Mayadeen television, Hezbollah’s number two Sheikh Naim Qasssem insisted that “Hezbollah would be the one deciding when to leave Syria, “which will take place when the party is guaranteed that ‘Syria as a resistance’ will remain.”

Qassem refers to the prominent role played by Syria in the “resistance axis” which opposes western interests, specifically the United States and Israel, and is headed by Iran with Hezbollah as the leading militant group based in Lebanon. The survival of this axis and pro-Iranian Syria is critical for Hezbollah and Iran. First, Syria provides Arab legitimacy to this anti-Western coalition. Second, Syria is an essential military supply line linking Iran to Hezbollah in Lebanon, which provides Iran with access to the ongoing Arab-Israeli military conflict and the Mediterranean region.

Since the beginning of the Syrian civil war, the Alawite regime of President Bashar Assad faced off against a largely Sunni opposition. The regime relies heavily on Hezbollah as a militant Shia organization to defend its position. Hezbollah was one of the first groups to spearhead pro-regime foreign legions between 15,000 to 25,000 fighters and comprised of Shiite factions from Iraq, Pakistan, Iran, and Afghanistan.

Hezbollah plays a highly versatile role in Syria. The Lebanese organization initially provided expert support to Assad in its crackdown on protestors. In 2011, Lebanese media started publicizing the death of Hezbollah fighters in Syria. The role of Hezbollah evolved to encompass offensive strategy during battles and much needed training to militias shoring up the Syrian regime.

Interviews with Hezbollah and members of the opposition attest that in many cases, Hezbollah was leading ground assault force in battles, and this first began during the 2013 battle of Qusayr. In an interview that same year, a Hezbollah fighter admitted: “Hezbollah is leading operations in Qusayr; the Syrian army is only playing a secondary role, deploying after an area is completely ‘cleaned’ and secured.” According to a report by the Institute for the Study of War, the Syrian government used Hezbollah fighters as a reliable infantry force alongside its own heavy weapons and airpower. In the battle of Qusayr, and on other war fronts in 2015 and 2016, military operations typically started with shelling followed by the infiltration of irregular units, and infantry attacks. Similar techniques were used as well in Zabadani and Aleppo. In Aleppo, Hezbollah played a threefold role according to interviews by the author with a Hezbollah commander who explained that the militant group headed the offense teams, which were followed by a demining team and a stabilization team.

In addition to its offensive strategy, Hezbollah has helped the regime in developing its irregular forces as well as financing and providing training to local militia groups as needed. According to researcher Aymen Jawad Tamimi, these local militias include Quwat Rhidha, the National Ideological Resistance (NIR), Liwaa al-Imam al-Mahdi, Junud Mahdi, and the Mahdi scouts among many others. Tamimi believes that Quwat al-Ridha is the core nucleus for Hezbollah in Syria and seems to be operating under the leadership and supervision of Hezbollah in Lebanon. Quwat al-Ridha includes Shia and Sunni hailing from countryside areas around cities such as Homs, Aleppo, Daraa and Damascus.

In an interview with Maan Talaa, researcher on pro-regime militias from the Turkey based think tank Omran Dirastat, Talaa adds that Quwat Ridha is estimated at 3,500 fighters and its military leadership is headed by Syrians, but the organization is financed and trained by Hezbollah. According to Talaa, two other groups can be directly linked to Hezbollah, the Liwaa al-Imam al-Mehdi and Assad Allah Ghaleb. Talaa underlines that Liwaa al-Imam al-Mehdi is also estimated at 2,000 fighters and mostly Alawites. “Assad Allah Ghaleb played a role in Ghouta, but they appear to have been decimated in battles,” explains Talaa. The Omran Dirasat researcher emphasizes that many other groups partner with Hezbollah and Iran. “In such cases, Iran generally bankrolls the groups while Hezbollah provides training,” he points out.

A Hezbollah trainer admitted in an interview that while thousands have been trained across Syria, some 10,000 were trained in Qusayr alone, the largest training facility for Hezbollah on the border with Lebanon.

Hezbollah appears well positioned in Syria for the next few years. The author interviewed Hezbollah fighters who were divided as to their long term role in Syria, but most agreed that they would not be leaving strategic regions anytime soon. “We will retain control of areas with a military importance such as Qusayr. Other spots around Homs which were given up to the Syrian army and were later lost will also stay in our hands,” says one fighter in a recent interview.

Hezbollah’s involvement in Syria has resulted in a high human cost, with 2,000 to 2,500 killed and some 7,000 injured over the last six years, according to an interview with anti-Hezbollah activist and researcher Lokman Slim. Numbers are difficult to verify with areas besieged by Hezbollah across Damascus, Homs, Aleppo, and Daraa. Yet, such human losses do not appear to have reached a tipping point for Hezbollah. The party has successfully convinced its popular base that its involvement in Syria and its fight on “terror” has shielded Lebanon from radical groups. The efficient crackdown post -2015 on terror networks by Lebanese security services has quieted criticism by Hezbollah constituents, after terror attacks dropped from a monthly occurrence to a near-zero incidence rate.

Recent gains have also played in favor of the organization. The fall of Aleppo dovetailed by internal clashes within the Syrian opposition, have improved the credibility of Hezbollah with its constituents in Lebanon.

Through battle and local diplomacy, Hezbollah appears to have consolidated its position as long as there is no grand bargain in Syria.