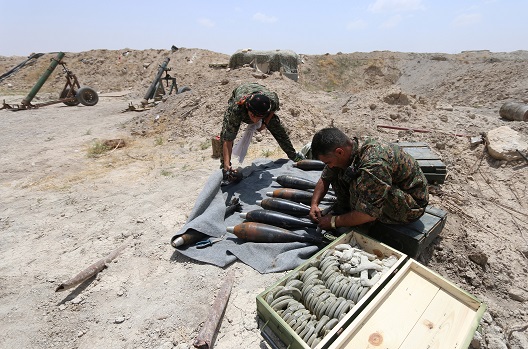 The United States and its closest partner in the Syrian conflict, the Syrian Democratic Forces (SDF), have begun an offensive to take the northern city of Manbij from the Islamic State (ISIS). On May 31 and June 1, the coalition conducted 27 strikes in the area, according to the Coalition’s daily strike update press release. The coalition has a specific definition of “strike,” which masks the true number of actual bomb drops in the area. Thus, one strike may mean one single bomb release from a single aircraft, or multiple aircraft delivering more than one munition in the same general area.

The uptick in strikes around Manbij is the first double digit number of strikes in the Manbij Pocket, a crucial area in northern Syria and ISIS’s last swathe of territory bordering Turkey, in support of offensive operations since April 2016, when the coalition appears to have given support to a smattering Arab and Turkmen groups operating along the Turkish-Syrian border. This previous offensive allowed for those groups to take territory as far east as al-Rai, a city just south of the Turkish border. However, these groups were unable to hold the territory taken, with the front line collapsing after ISIS began its counter offensive. The SDF faced similar counter-attacks along its front line near the Tishreen damn and Tel Abyad. In the case of the former, the coalition conducted double digit strikes near Tishreen, while in Tel Abyad, the strikes appear linked to the targeting of an ISIS sleeper cell that had infiltrated the city. In both cases, the SDF held territory taken.

The strike data suggests that the Islamic State withdraws quickly from areas under heavy bombardment from the air, but quickly regroups to mount counter attacks along the front lines.  On the Manbij front, this suggests that the SDF will be able to quickly take territory in the area, but that ISIS will also continue offensive operations against the “hold force.” As the SDF pushes west, the ethnic composition of the hold force will grow in importance. Moreover, the capabilities of this force, particularly if they mainly Arab forces and operate with little direct YPG support, will also determine the success of this current phase/sub-set of the war.

The SDF is primarily comprised of the Syrian Kurdish YPG, the Syrian wing of the Kurdistan Workers’ Party (PKK), an insurgent group that has fought against the Turkish government since 1984. The United States and Turkey have both listed the PKK as a terror group. Turkey has also designated the YPG a terrorist group, while the United States has drawn a distinction between the two groups. Turkey has previously ruled out any cooperation with the SDF, owing to the YPG’s dominant position in the group. The United States has consistently sought to incorporate a great number of Arab forces into the SDF, both to address Turkish objections, and also to minimize Sunni Arab concerns about a YPG heavy force in Arab majority areas.

According to Reuters, the United States plans to use the YPG to take territory, only to have them withdraw, and replaced with Syrian Arab SDF fighters. The United States has used similar tactics in the past, albeit in Iraq, where American forces were present in very large numbers. During the 2003 invasion, for example, American Special Operations Forces (SOF) embedded with the Peshmerga and rapidly took territory in the northern part of the country. As these forces approached the division between Kurdish and Arab territory, the SOFs and the Peshmerga took territory, only for the Peshmerga to later withdraw from certain areas, largely over American concerns about intra-ethnic strife and US relations with Turkey. This approach slowed aspects of the invasion, but this tactic was a success, in that a small number of SOFs, local forces, and airpower were able to rapidly take territory from the enemy.

It is unclear if the small number of Arab forces with the SDF has these capabilities, raising questions about the claims of a YPG free hold force in territories taken. However, if utilized correctly, the US can rely on a small number of YPG, embedded with larger allied forces to protect front line positions with air strikes. This approach could, in theory, then be used to generate more interactions with Arabs currently living under ISIS rule, in order to gain greater battle field awareness and begin to grow the number of allied Arab fighters with the SDF, or simply ease ethnic tensions in areas taken from ISIS.

The United States also has a much broader incentive to use these Arab forces to cultivate closer ties with other Sunni Arab groups in the area. These groups could fulfill a range of needs, from helping to identify ISIS positons in areas where the coalition has no presence on the ground, to tribal groups joining or reaching local peace agreements with the SDF.

In the days ahead, the coalition and the SDF are likely to take territory from Islamic State near Manbij. The data then suggests that Islamic State will launch a counter offensive, testing the front line and hold forces. The defense of these areas will determine the tactical success of this latest operation against ISIS. The longer term definition of success, however, requires the bolstering of Arab forces within or allied with the SDF to blunt ISIS’ presence further west and ease Turkish and Syrian Arab concerns about the YPG seizing more territory.

Aaron Stein is a Senior Fellow at the Atlantic Council’s Rafik Hariri Center for the Middle East.