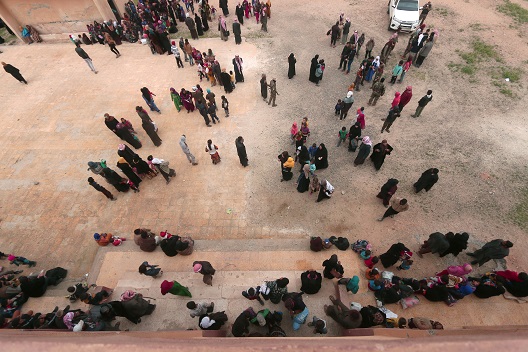 With Trump’s approval last week to directly arm the YPG, the United States is gearing up for the battle to capture Raqqa city from the Islamic State (ISIS, ISIL, or Daesh). To understand how the United States got to this point—arming proxy forces, troops on the ground, all the while conducting air strikes—one can ask: how did Raqqa became the self-declared capital of ISIS?

Trump has repeatedly said that Obama is responsible for creating ISIS. Although Obama did not ‘create’ ISIS, the reality is that the hesitation of the Obama administration, first in heeding the warnings from senior US officials in the early days of the revolution about the chance for extremist groups to find fertile ground in Syria, and again in combating ISIS in 2013-14, played a key role in the growth of ISIS. Even today, if one maintains an anti-interventionist position, one cannot deny that the inaction of the Obama administration was one of the main reasons for the chaos today—chaos that the new president has to address.

In the winter of 2013, the first military rebel-led operations against ISIS started in Syria after ISIS killed one of the doctors that was affiliated with Ahrar al-Sham. This doctor was well known and popular in his community, so when a video emerged showing his dead body and evidence of torture, there was an uproar in the Syrian community. The battle against ISIS started in Aleppo and spread to different parts of the country, leading to the withdrawal of ISIS from western Aleppo province to al-Bab and  Manbij.

The Obama administration provided partial assistance to vetted rebel groups in western Syria. Rebel group commanders had to meet in Turkey and northern Syria with US officials after which they, and the groups they represented, went through interagency vetting and background checks. Notwithstanding, the Obama administration only gave these groups minimal support, and not enough to stop the growth of ISIS, much less undo it. The main concern of the administration was and continues to be the risk of arms ending up with extremist groups.

ISIS gained the offensive against the last rebel-led battle in Manbij. As a result, the ISIS military leader at the time, Abu Omar al-Shishani, took control of Raqqa and Deir Ezzor to open routes to Mosul, Iraq. In January 2014, ISIS declared Raqqa the capital of its emirate (at this point, it had not declared its caliphate).

In the summer of 2014, with the public execution of James Foley, and later Steven Sotloff and Peter Kassig, matters changed. The beheadings became a media spectacle and there was immense domestic and international pressure for the administration to respond. This is when the Obama administration started to arm more groups and intervene directly in the form of air strikes. However, the focus of this support was in the northeast towards groups fighting ISIS, not in the west where groups were focused on fighting the regime. By this time, al-Qaeda had expanded in the west while the Free Syrian Army (FSA) and moderate opposition groups forces contracted significantly compared to 2013.

In the past six months, many areas have been retaken from ISIS such as  Manbij, al-Bab, and Jarablous. That being said, they have been liberated at the expense of hundreds, maybe thousands of casualties from US air strikes, Turkish shelling, and Kurdish clashes with ISIS human shields. Meanwhile, displaced inhabitants did not celebrate this liberation. The activists and FSA rebels from Manbij, many who led the fight against ISIS in 2013, are not able to return because Kurdish YPG forces control the town. Houses that were formerly seized by foreign fighters are now housing Kurdish forces. For the owners of these houses, this is not the liberation they imagined. In essence, by relying on US air strikes, Turkish and Kurdish forces, formerly held ISIS areas have been liberated but through massive casualties, permanent displacement, and further fragmentation of an already divided country.

The approach of the United States—coming late to the game, relying on a multitude of foreign powers intervening in the conflict, and not taking a leadership role—guarantees fragmentation and division of Syria, and destroys any hope of reuniting the country. Foreign flags now fly over many former ISIS-held areas. Turkish flags are raised in al-Bab and Jarablous where there is now a strong Turkish security apparatus. American flags are now present in  Manbij. Yet, there is a lack of Syrian flags. Had local troops been supported in the critical year of 2013, things may have been different. Unfortunately, the role of the United States is increasingly dictated by media spectacles and domestic politics as opposed to political realities. When US polls showed that it was not favorable to support the opposition, or conduct air strikes after the regime’s sarin gas attack Ghouta in 2013, the Obama administration held back. After the beheading of James Foley in August 2014, public polls said that the United States should do something about ISIS, and one month later the US and its allies began the most flashy, but least politically costly method, that they could: air strikes without ground forces.

Raqqa became the capital of ISIS because of US neglect of local forces when ISIS was first established itself. Syrian Democratic Forces, the coalition of ground forces dominated by the Kurdish YPG, with support from the US-led international coalition are now leading the drive to Raqqa and preparing to lay siege to the city—but at what cost? The forces retaking Raqqa are not native to the city and harmed and upset residents in the drive to Raqqa. Dissatisfaction with the international community and their supported proxy forces has increased. Extremist groups post-ISIS will recruit easily. Raqqa may fall, but the narrow focus of current US policy will sow the seeds of further unrest and fracturing in Syria.

Today, Trump administration’s policy towards Syria is unclear. But gauging from his debates and statements, his goal is a flashy victory against ISIS, to show the domestic audience that he is strong on terrorism. To achieve that, he may be willing to work with the Syrian government and the Russians. However, he has said that he will not work with the Syrian rebels as he does not know “who they are.” By not engaging with local forces and addressing civilian grievances, the Trump administration is opening the door to further radicalization, fragmentation, and instability.

Loubna Mrie is a Syrian activist who participated in the initial stages of the revolution. She later became a photojournalist with Reuters based in Aleppo, where she covered the ongoing conflict in the Idlib, Aleppo, Latakia, and Hama governorates. Originally from the Syrian coastal city of Jableh, she is currently based in New York City where she is a researcher and commentator on Syrian and Middle Eastern affairs and is completing an MA at NYU. Her work has been published in major outlets including the Washington Post, Foreign Affairs, Foreign Policy, and New Republic.