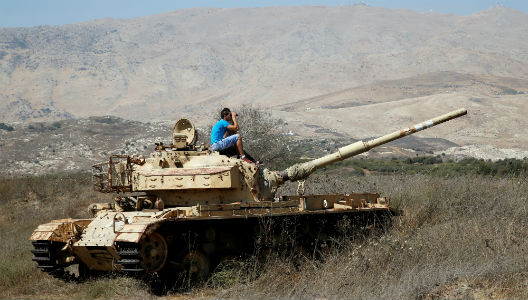 Despite decades of contentious relations between Israel and Syria, including three wars, Syria giving refuge to the National Liberation Movement (Fatah) combatants in the 1960s, and continued failed peace negotiations, the 57-mile border with Syria has remained Israel’s most stable for more than four decades, even after the outbreak of the war in Syria.

Israel’s policy on the civil war in Syria has been remaining neutral. Yet, since the beginning of the war, Israel has faced a dilemma: what, from Israel’s perspective, is a favorable outcome of the Syrian war? Would Israel be better-off with the “devil it knows,” namely, a victorious Bashar al-Assad? Or should Israel prefer the collapse of the Assad regime and the formation of rebel-led cantons, some of which will most certainly include jihadist elements?

In the shorter-term, having the conflicting parties in Syria fighting each other serves Israeli interests because it reduces the likelihood of these parties, both pro-government and rebels, to provoke Israel.

To fight the rebels on other fronts early in the war, President Bashar al- Assad redeployed most of his forces from the Syrian Golan Heights to the vicinities of Damascus and other strategic locations, enabling Jihadi rebels—most prominently, Jabhat Fatah al-Sham, formerly known as the Nusra Front—to gain control of the Golan Heights. As long as the jihadists remain occupied with securing their strongholds in the Golan Heights, they are likely to refrain from provoking Israel. Indeed, since November 2012, the Israel Defense Forces (IDF) have been retaliating to fire from the Syrian part of the Golan Heights near Israeli villages and IDF patrols. Israeli concerns about potential spillover of the conflict and terrorist infiltrations led the IDF to replace its reserve forces near the border with more qualified regular forces and construct a new border fence with sophisticated anti-infiltration devices. However, it often remains unclear whether the fire was intentional or inadvertent. In addition, the weakening of the Islamic State (ISIS), its relatively low presence near the border, and its fight against Fatah al-Sham on the Golan Heights strengthens the Israeli view of the militant group as a limited tactical threat to Israel. Finally, to alleviate the humanitarian catastrophe, the IDF built field hospitals near the border with Syria to treat injured Syrians, some of whom were also treated in Israeli hospitals.

In the longer-term, a growing consensus in the Israeli security establishment is that the main strategic threat to Israel is a victorious Assad. Israel considers Assad, who enjoys the active backing of Iran and Hezbollah, more perilous to Israel’s national security than a fragmented coalition of Sunni rebels. Accordingly, the emergence of a Syrian regime that will be part of a radical Shia-axis, stretching from Tehran to south Lebanon, is Israel’s least favorable outcome. Consequently, Israel’s main objectives in Syria are twofold: preventing the trafficking of advanced weapons to Hezbollah that would jeopardize Israel’s air and sea forces and halting Iran and Hezbollah from transforming the Syrian Golan Heights into a launching pad for warheads that could target Israeli civilians and strategic assets. Israel considers the trafficking of such weapons a “redline” that necessitates a preemptive response.

Since its last war with Israel in summer 2006, Hezbollah has increased its arsenal of missiles and rockets at an impressive pace. According to Israeli analysts, in the aftermath of the war, Hezbollah was left with approximately seven thousand missiles and rockets. But, by 2016, the Shia militia had increased its inventory to one hundred and fifty thousand. Hezbollah now holds the advanced Russian surface-to-air missiles, SA-17 and SA-22, and the Russian anti-ship cruise missiles, Yakhont (P-800 Oniks).  Thousands of the organization’s rockets—such as the Iranian made Fateh 110—can hit any point inside Israel. Moreover, while Hezbollah suffers heavy casualties in Syria, the battlefield experience its men gain there is another source of concern for Israel.

While Israel does not take an active role in trying to shape the events in Syria, it does act whenever such weapons are suspected to make their way to Hezbollah. Since January 2013, several reports mentioned that the Israeli Air Force (IAF) had destroyed a convoy of trucks on the Syrian-Lebanese border and weapons’ warehouses in Syria that carried and stored missiles destined for Hezbollah. Israel’s prime minister, Benjamin Netanyahu, admitted that Israel occasionally operates in Syria to secure its interests. Moreover, some media reports attributed the assassination of leading Hezbollah commanders, Samir Kuntar and Jihad Mughniyah, to Israel, which did not confirm the attacks.

Diplomatically, during his last meeting with Russia’s president, Vladimir Putin, in July 2016, Netanyahu expressed his concerns of Russian weapons ending up in Hezbollah’s hands. By strengthening its relations with Moscow, Israel is trying to meet two main objectives. First, to persuade Russia to not arm Hezbollah, Syria, and potentially Iran with advanced weapons. Second, as a lesson from the Turkish interception of the Russian jet in November 2015, which severely strained the countries’ relations, Israel coordinates some of its operations in Syria with Moscow so as to prevent potential clashes between the countries’ air forces.

Regional chaos, mutual concerns about Iranian influence, and American retrenchment from the Middle East have also opened the door for interesting opportunities for Israel. Chief among them has been Israel’s warming relations with the so-called moderate Sunni Arab countries: Turkey, Jordan, Egypt, and members of the Gulf Cooperation Council (GCC).

These countries share with Israel a strong interest to contain Iranian policies in the region and offset Russian meddling in Syria. In April 2016, Israel and Turkey officially settled the countries’ crisis, which followed the deadly incident on the Turkish vessel Mavi Marmara in May 2010. The chaos in Syria was an important impetus in concluding the agreement, in which one of its main provisions discusses the resumption of military and intelligence cooperation.

Further showing how Israel’s position in the region is changing is how Egyptian-Israeli security cooperation, particularly concerning the Sinai Peninsula, is prospering. For example, Israel now allows Egyptian forces to operate in the demilitarized zone near the countries’ border and Egypt permits Israel to carry out drone strikes against terrorists, such as ISIS affiliate Wilayat Sinai, which has been operating in the Sinai Peninsula in recent years.

Finally, the common threat from Iran and shifts in American policy has helped to facilitate lines of communication between Israel and GCC members, including Saudi Arabia. In late 2015, for instance, Israel opened a diplomatic office in the UAE, which represents the first time in more than a decade that there will be an official Israeli presence in the Persian Gulf. However, talks about an Israeli-GCC normalization is premature because “normal relations” depend on  meaningful progress between Israel and the Palestinians. For these regimes, the domestic and intra-Arab costs of overt cooperation with Israel outweigh its benefits. Both Israel and the GCC seem to continue to prefer a dual policy that simultaneously accepts the lack of normalization yet maintains active, albeit tacit, ties.

In the longer-term, if the Assad regime falls, the identity of the polity or polities that will replace it may provide further opportunities for Israel. Israeli-Kurdish affinity may help in facilitating relations with a future Syrian Kurdish polity, yet much here depends on Turkish and American attitudes towards such a polity. On the more extreme end of the actors in Syria, a spokesperson of one of the largest Islamist militias in Syria, Jaysh al-Islam, recently said that the group does not exclude future relations with Israel, contingent on the people’s desire once the war ends.

Moran Stern is an Adjunct Lecturer at the Center for Jewish Civilization in Georgetown University’s Edmund A. Walsh School of Foreign Service where he teaches courses on Israel and the Middle East. In addition, he is a PhD candidate in Government & Politics at the University of Maryland and a Graduate Fellow in Advanced Israel Studies.

Previously, Moran taught at American University’s Center for Israel Studies. His analyses appeared in venues such as The Atlantic, The Jerusalem Post, The Forward, and Washington Jewish Week. Moran holds an M.A. in International Relations, Economics, and Middle East Studies from the Johns Hopkins University (SAIS) and B.A. in Philosophy and Communications from Saint Francis College, New York. He speaks Hebrew and Arabic.

Image: Photo: A man sits on an old tank as he watches fighting taking place in Syria as seen from the Israeli side of the border fence between Syria and the Israeli-occupied Golan Heights September 11, 2016. REUTERS/Baz Ratner