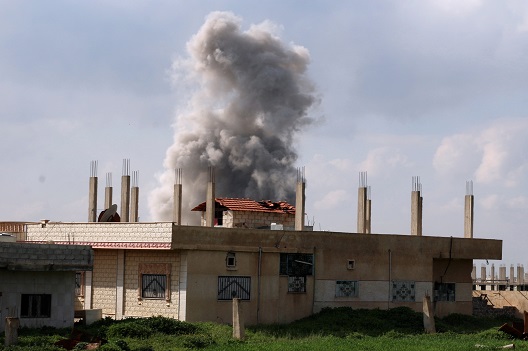 BEIRUT – Russia, Iran and Turkey’s recent agreement to create “de-escalation zones” in Syria is a result of Moscow’s significant steps towards partitioning the western part of the country into zones of – sometimes foreign – influence. The Kremlin’s plan, proposed at the recent round of Astana negotiations, safeguards its own interests in Syria, while giving Russia’s allies and rivals the impression of also satisfying their respective agendas.

The agreement emphasized the overlap between the two main distinct conflicts in Syria. In western Syria, the Russian-Iranian-Syrian government (GoS) alliance and Turkey, Saudi Arabia and Qatar respectively represent the two fighting fronts. In northeastern Syria, Kurdish-led forces, with US and Russian support, are fighting the so-called Islamic State (ISIS, ISIL, Daesh). What’s more, the US will soon directly arm Kurdish forces, who recently received an official endorsement from the Syrian government (Syrian foreign minister Walid al-Muallim said the Kurds’ war against ISIS in northeastern Syria is “legitimate.”)

Geographically, Russia’s plan to create four “de-escalation areas” concerns only the western Syrian conflict; however, in terms of control and influence, nearly every player involved in both fights has something at stake.

In order to guarantee support from all the varied players involved both in the conflict and negotiations, Moscow adapted the Astana proposal to include language that each actor would find acceptable, if not fully satisfying.

For the first time, the term “de-escalation” was introduced alongside the expression of “safe zones,” which US president Donald Trump has widely used. He discussed the issue with Russian president Vladimir Putin just days before the Astana meeting; this call was the first direct contact between the two leaders since the US strike on a Syrian airbase in April.

Juxtaposing the phrase “reduction of violence” with the term “de-escalation,” kept the memorandum consistent with the United Nations’, and the international community’s, rhetoric on Syria. The agreement also emphasized bringing humanitarian aid and relief to Syrian communities in the four “de-escalation zones.”

Another issue that proved useful in selling the agreement is the plan to “fight the terrorists” (both jihadists and al-Qaeda affiliates) in these four zones. This is a prevailing theme in the Syria policies of several stakeholders in the region and the West. (However, the current terms risk further marginalizing the US role in western Syria, as Russia said that the US and the US-led anti-ISIS coalition warplanes would not be allowed to operate in the zones.)

Debates on the deal’s details are ongoing, but as it stands, Turkey could gain a more direct role in influencing local dynamics in the northwestern region of Idlib, along the Turkish border. Jordan could gain additional legitimacy to control the southwestern regions of Daraa and Quneitra, on the border of both the Israeli-controlled Golan Heights and the Hashemite kingdom.

As guarantors of the agreement, Russia and Iran, along with the Syrian government and Hezbollah, the Iran-backed Lebanese militia, would have an unprecedented upper hand to contain and gradually defeat the last major opposition pockets in eastern Damascus and the northern Homs countryside.

Iran could further its goal of securing central and southern areas along the Lebanese border and close to the Golan Heights. The Islamic republic has also shown interest in widening its cultural and political influence in and around Aleppo city, while Russia could strengthen its grip along the coast and vital central areas that link Hama province and Palmyra in Homs to the capital, Damascus.

Anatomy of the Four Zones

The four proposed zones can be divided into two categories: areas along the Turkish and Jordanian borders, and areas encircled by pro-government forces. The first category, which includes areas in the northwestern province of Idlib and the southern provinces Daraa and Quneitra, is better positioned to resist pro-government military pressure, largely because factions enjoy direct foreign support through the borders.

The Idlib zone, which could extend to the countrysides of northern Hama and western Aleppo, contains the bulk of the armed opposition and is the widest and most consolidated territory outside of governmental control. Alongside former Free Syrian Army (FSA) military factions, some districts are dominated by a mix of jihadist groups, most notably the Syrian wing of al-Qaeda. The area has witnessed a gradual radicalization towards political jihadism for various reasons: It is historically one of the fiefs of Syrian Sunni rural conservatism, and has seen the arrival of tens of thousands of radical (and radicalized) fighters and civilians evacuated from Syrian opposition areas that surrendered after lengthy and brutal sieges – a key strategy used by Damascus and its allies.

The southern area is expected to include opposition-held districts in Daraa and Quneitra, along the Jordanian border and Israeli-controlled Golan Heights. Here, jihadist groups (linked to both al-Qaeda and ISIS) have not enjoyed the same leadership role as their northwestern Syrian branches. Former FSA rebel factions, who have been operating under tight supervision and the influence of Jordanian authorities for years, control military and political initiatives in this area. According to both confidential and published sources, Amman has been coordinating its efforts in “stabilizing” southern Syria with US and its allies, Israel, the UK and Saudi Arabia, at least since 2015.

The second category, which currently includes areas in the northern Homs countryside, and Eastern Ghouta in the Damascus suburbs, is doomed to a long siege and eventual surrender, akin to the recent evacuations in Zabadani, Madaya, Wadi Barada and eastern Aleppo city.

Eastern Ghouta has recently witnessed a fratricidal and bloody confrontation between rival factions, which Saudi Arabia and Qatar have supported in varying degrees. In the meantime, pro-government forces have been gradually seizing control of the western and northern rebel-held districts through local agreements officially called “reconciliations” (musalahat).

Shortly after the Astana agreement, the rebel-held northern Damascus neighborhoods of Barzeh and Qaboun were evacuated under a “reconciliation” deal with the government. Foreign minister Muallim implicitly linked the deals’ “success” in various zones of the country to the Kazakh entente. Later, Syrian president Bashar al-Assad established a more explicit link between the two.

Reading Between the Lines

In this context, the Astana agreement’s first underlying aim is to contain the armed opposition in the four “de-escalation zones” by decreasing their ability to launch attacks on pro-government forces, as they did between February and April in the Idlib and Hama countrysides, in Daraa city and Eastern Ghouta. Following this, the agreement could help formally legitimize the Russian-Iranian-Syrian strategy to surround and ultimately defeat insurgents in Ghouta and the northern Homs countryside.

Syrian officials said they would respect the plan for a flexible no-fly zone in the “de-escalation” areas – effectively controlled by the Syrian and Russian air forces- “unless local groups violate the agreement.” A violation, according to Muallim, would legitimize a decisive Russian and Syrian response against the perpetrator.

What’s more, the Astana entente states that “terrorists and their affiliated groups” should leave the four areas, or be forced to leave. In saying this, Moscow and Damascus leave the door open for continued military force in those areas.

The agreement also gives Turkey and Jordan and their respective allies a more explicit role in containing and controlling local opposition groups in their separate radiuses of influence.

Amman could increase its coordination with the US and its allies along the southern border, which could help the US widen its control to the oil-rich, ISIS-held districts in southeastern Syria, namely Abu Kamal and Deir Ezzor. A stronger American and Jordanian influence near the southern borders would also allow Washington to safeguard its traditional regional priority: access to Iraq and the Gulf.

However, Turkey could face difficulties in Idlib, where Ankara’s military and political influence is much less established and must be negotiated with Qatar and Saudi Arabia. What’s more, pro-government allies are likely to push Turkey to give them control of the eastern city of Saraqeb, a strategic point on the Hama-Aleppo highway, the last rebel-held route that links Daraa and Aleppo, to the loyalist forces.

Though UN envoy Staffan de Mistura said that negotiations at Tuesday’s new round of Geneva talks are “working in tandem, in a way,” with the Astana “de-escalation” zone agreement, many obstacles remain to securing Russia’s proposed de facto partition of western Syria. What is clear, however, is that the issue will be at the forefront of negotiations, presented as way to decrease civilian suffering.

Lorenzo Trombetta is a Beirut-based journalist, Middle-Eastern senior correspondent for Italian News Agency Ansa. Specialized on contemporary Syria, he authored two monographies on this issue, focusing on the structure of the system of power in Baathist Syria. He regularly consults international organizations and national institutions on how to support civil society development in Syria.