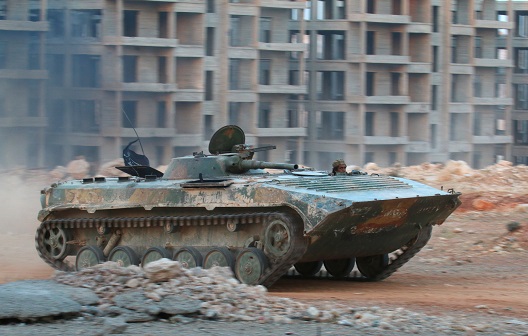 The arrest, this week, of several prominent jihadists in Syria by Hayat Tahrir al-Sham (HTS) is a third and possibly final chapter in the group’s coup against its mother organization al-Qaeda, one that was recognized in a harsh statement by the latter’s leader, Aymen Zawahiri. The controversial move is one way for HTS to finalize its mainstreaming gambit initiated by its leader in 2016.

On November 27, chat rooms with HTS supporters reported that two prominent jihadists namely sheikh Sami Uraydi and Abu Julaybib had been arrested after being convened to a meeting by HTS. The arrest appears to have targeted a number of members of the former Jabhat al-Nusra (JN), from which HTS eventually branched out. In August 2016, Nusra was dissolved when the group seceded from its parent organization al-Qaeda and rebranded under the name Jabhat Fateh al-Sham (JFS).

Besides Sami Uraidi and Abu Julaibib al-Ordoni, other arrested prominent members included Abu Khadija al-Ordoni  and Abu Mussaab al-Libi, explains Sheikh Hassan Dgheim, an Islamic scholar who follows the Syrian jihadist scene closely. “Those [members] were opposed to a shift of HTS [away] from the Salafi jihadi robe,” adds the cleric.

The arrests come after a long campaign of mysterious assassinations targeting HTS members. Atlantic Council nonresident fellow, Haid Haid, counted over thirty-five assassinations against the organization’s members since September. Haid underlined that most of the attacks targeted high profile scholars and leaders – mostly Saudis, Jordanians, and Tunisians such as Abu Talha al-Ordoni, Abu Abdulrahman al-Mohajer, Abu Sulaiman al-Maghribi, Abu Yahya al-Tunisi, Suraqa al-Maki and Abu Mohammad al-Sharii and local leaders, namely Abu Elias al-Baniasi, Mustafa al-Zahri, Saied Nasrallah, and Hassan Bakour. Idlib sources who spoke to the author said that many of the attacks could be the result of an internal campaign against the organization’s hardliners and foreign jihadist wing, less open to the more pragmatic agenda adopted by the organization. If this theory is confirmed, these assassinations fall within HTS’s leader Abu Mohammed al-Joulani “Syrianization” plan to completely sever the group’s external ties to al-Qaeda.

Dgheim believes that the arrest will be costly for HTS which has continuously shifted allegiances, over the past few years from the Islamic State (ISIS, ISIL, Daesh) to al-Qaeda. After its disagreement with ISIS leader, Abu Bakr Baghdadi, it cut ties with al-Qaeda or JFS and consolidated power with other groups within HTS. The arrest of prominent jihadists is a third chapter in the evolution of the former Nusra group. The first step was, as previously mentioned, its secession from al-Qaeda in 2016, and its relabeling under JFS, a move many experts pointed to as a mere name change but underlined otherwise in this blog, as a significant inflection point in Syrian jihad. At the time, the move appeared to be motivated by a growing interest in local politics among Syrian jihadists. This concern also pointed to a de-prioritization by JFS of what was known as the “far enemy” (enemies outside of the immediate region), which was at the core of al-Qaeda’s ideology since the September 11 World Trade Center attacks.

HTS now appears to be witnessing its third evolution, according to Dgheim, the arrests are not only an indicator that HTS is moving away from the jihadist nucleus, but also that it is aiming for a more civilian structure. “HTS want to reinvents itself as a more pragmatic player,” believes the cleric. A recent statement by the organization is telling; which spoke of HTS efforts of establishing a “Sunni entity,” breaking away from the jihadist jargon.

According to Idlib activist Ibrahim Idilbi, HTS has been working on insuring its political future by infiltrating civilian structures in Idlib such as the “Idara Madaniya Ameh,” or the General Civilian Administration which manages services for the various governorate’s cities and towns, dealing with everything, from census work, to camp management, and coordination with local and international NGOs. “This not only provides it with unequaled clout over the governorate, but also makes it an unavoidable partner in the region. The “Salvation Government,” which is key to the project includes figures who are close to the organization,” explains Idilbi.

An opinion that Syria expert Samuel Heller appears to share. In a recent piece for The Century Foundation, Heller highlighted that the northwest was now run “by a set of mostly new, nominally independent bodies that are widely understood to be controlled by Hayat Tahrir al-Sham. The crux of Tahrir al-Sham’s political-administrative project is the civilian-led “Salvation Government,” which was formed through a miniature, managed version of an inclusive national dialogue and to which Tahrir al-Sham handed control of its “Civil Administration for Services.”

HTS consolidation efforts were concomitant to Turkey’s October entry in Idlib. It took place in coordination with the organization, relieving fears of a wide military operation initially circulated in September. Turkey’s entry into the Syrian foray in Idlib could have sped up the third evolution of HTS. It was nonetheless to be expected in light of the recent jihadist divisions in Syria confirmed by a recent video by al-Qaeda leader Aymen Zawahiri. In the 35-minute audio message, Zawahiri rejected the rebranding and said that Jabhat al-Nusra had betrayed the oath of allegiance (bayat) it owed as the branch of his organization in Syria, that he believed could only be recanted if the unity of the Syrian jihadi scene was achieved and an Islamic government and imam were chosen in Syria. He also denounced the primacy of local jihad by HTS.

“The jihad in the Levant is that of the (Islamic) oumma, one does not say it is the jihad of Syria, or that of Idlib’s people…or Daraa,” argued Zawahiri.

The former Nusra third evolution is a clear break-up with the international Jihad community. Jolani’s move allows him as well to inflict a preemptive strike against a possible coup by al-Qaeda members while hindering any attempt by the JN old guard to establish an al-Qaeda affiliate on Syrian soil.