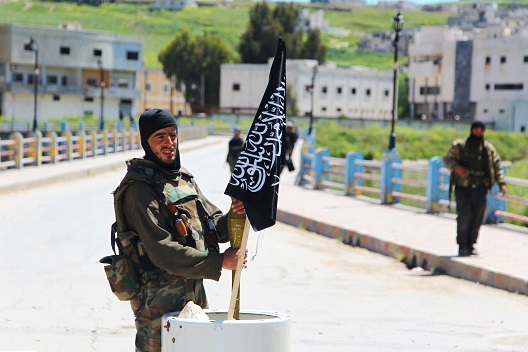 Hay’at Tahrir al-Sham’s (HTS) military dominance in Idlib has not been translated into total popular support. Today, the province is split between those who accept the extremist group and those who are pushing back against its rise to prominence.

Al-Qaeda linked militants have emerged as the dominant military force in the northwestern Syrian province of Idlib, but their success in gaining support from residents has been uneven at best. Some civilians have developed a circumstantial acceptance of the group, which they see as their best bet against the Syrian government, while others are uneasy about its rise to prominence in the only remaining province under complete rebel control.

It remains unclear which camp currently holds more sway in Idlib, but the divergence in opinion stands to show the complex terrain of allegiances in the province and negates claims of a wholesale rejection of the al-Qaeda linked group.

“There is no reliable way of determining the extent of support for al-Qaeda in the northwest,” Sam Heller, a Syria analyst and fellow at the Century Foundation, told Syria Deeply. He said, however, that it would be a mistake to dismiss the possibility that al-Qaeda linked militants command a genuine popular base.

“They are the premier fighting force against the Assad regime and, at least, in some respects, that is the currency of legitimacy,” he said.

Al-Qaeda has been an active player in the Syrian civil war since 2012, initially presenting itself as a support group for the larger opposition against Syrian President Bashar al-Assad. Fighting under the banner of the Nusra Front, the group spent its first three years building alliances and embedding itself in the opposition against the Syrian government.

In an attempt to improve its standing among the local opposition, the Nusra Front underwent a clever rebranding effort last year. It changed its name to Jabhat Fatah al-Sham (JFS), claiming to have cut all ties with al-Qaeda, and then merged with other rebel groups to form the Hay’at Tahrir al-Sham alliance (HTS). The aesthetic move, however, has not convinced some in Syria, who still refer to HTS as al-Qaeda’s Syria affiliate.

Over the past year, the group’s ranks have swelled because of defections from rival opposition groups. For example, thousands of fighters who are sympathetic to al-Qaeda defected from Ahrar al-Sham last year to form the HTS alliance. Ahrar al-Sham was dealt a more severe blow in Idlib last month when HTS captured two lucrative border crossings with Turkey and expelled its main rival from most parts of the province.

With most of Idlib under its control, HTS finds itself in 2017 as the strongest opposition faction in the conflict, and with few alternatives left to turn to, it has also become the best bet for Syrians who want to fight the government.

“[HTS] is the strongest and only group capable of managing the province,” Mohammad al-Salim, a resident of the town of Hass in the Maarat al-Numan district, told Syria Deeply. “They are our best option.”

The 53-year-old engineer criticized HTS’s main rival, Ahrar al-Sham, for “lacking a vision,” and for being a weak and disorganized force. “Ahrar al-Sham is a paper dragon and not a real fighting body,” he said.

Unlike Ahrar al-Sham, HTS is a much more cohesive fighting force, according to al-Salim, who argued that the group’s staggering success in overtaking Ahrar al-Sham’s positions last month demonstrated its capabilities.

Although some residents have rallied behind HTS, the extremist group’s crackdown on its opponents and its intolerance of dissent has led to a sense of unease among many who live under its rule.

Since last month, a series of protests have erupted against the group in the town of Saraqib, which was previously held by Ahrar al-Sham, and in several villages and towns in the FSA stronghold of Maarat al-Numan, an area with an established history of resistance to the extremist group.

HTS responded by cracking down on dissent: it fired on protesters and detained a number of people who oppose its rule, according to the Jabhat al-Nusra Violations Group, an activist-run monitor that tracks and records HTS abuses in Syria.

Rami, a 33-year-old media activist from the town of Saraqib, which is currently controlled by a brigade of local fighters known as the Saraqib Revolutionary Front, described al-Qaeda’s ascendancy in Idlib as a “danger to all areas freed from government control.”

“We are now living under surveillance and fear … we are reliving the [same fear] we had during the 2011 uprisings against President Bashar al-Assad,” he said.

According to Rami, media activists and civilian-run media outlets that are opposed to the group are bearing the brunt of this HTS campaign. He says that they are being stopped at checkpoints and are facing a greater risk of death and arrest.

A statement released by HTS spokesman Imad al-Deen al-Mujahid on his official Telegram channel on July 22 seems to confirm these fears. In the post, he makes a distinction between two kinds of media activists: the “enemies” who are trying to rattle safety and security in “liberated” areas by turning activists against HTS, and the “honorable heroes” who he described as an essential component of the Syrian opposition. Only the latter, he says, would benefit from the protection of HTS, in a statement that calls into question whether or not the critics of al-Qaeda will be subject to its harsh rule.

Beyond its restriction on personal and civil freedoms, some residents also fear a disruption in aid services to Idlib.

There are two million people in Idlib, of which 1.3 million are in need of humanitarian aid. Activists have accused HTS in the past of sabotaging relief services by seizing aid convoys and disrupting aid provisions, but now some residents fear that the rise of HTS would also lead foreign donors and aid agencies to cut off or limit aid to the province.

“We are scared that there is going to be larger disruption of relief services. Some aid organizations have already started to relocate because of HTS’s tightened control,” Sami, a 28-year-old teacher from Saraqib, told Syria Deeply. He adds that these fears were compounded after HTS wrested control over the lucrative and strategic Bab al-Hawa border crossing into Turkey, which is the main route for aid and supplies into the province. Turkish officials have already announced that they would limit cross-border movements following the HTS advance.

For many residents, however, their gravest concern is that the rise of al-Qaeda will feed the government’s rhetoric that the uprising is driven by Islamic extremists and would provide a pretext for a wide-scale assault on Idlib. Although there is no immediate evidence of an imminent government campaign, the rise of HTS in Idlib has already prompted the U.S. to acknowledge that it would be unwilling or unable to prevent a future operation against extremists in the area.

“HTS, in the eyes of the world, is a terrorist group and I don’t want their rise in Idlib to confirm the government and Russia’s narrative that Idlib is an extremist stronghold,” Ali al-Dalati, a 19-year-old resident of the Idlib town of Kafr Takharim, said.

“It’s not the Kandahar of Syria or the Tora Bora of the Levant,” he added, referring to al-Qaeda bastions in Afghanistan.

Ali, who moved to Idlib after being displaced from the Barada Valley of Damascus earlier this year, expressed his fear that the province could become like the Iraqi city of Mosul or the Syrian city of Raqqa, which have been flattened by fierce campaigns against the Islamic State group (ISIS).

“If this happens, death will return to the province,” he said.

Hashem Osseiran is the deputy managing editor of Syria Deeply. He has previously written for The Arab Weekly and The Daily Star. He has also worked with the Associated Press, where he focused on user-generated content. Hashem holds a masters degree in Middle East Politics from the School of Oriental and African Studies, at the University of London. He is a native of Beirut, Lebanon.

Wissam Frangieh is a Syrian freelance journalist based in Istanbul.

Image: Photo: A Nusra Front fighter carries a shell near a Nusra Front flag on his weapon in Jisr al-Shughour town, after rebels took control of the area April 25, 2015. Islamist insurgents including al-Qaeda's wing in Syria Nusra Front seized the strategic northwestern Syrian town of Jisr al-Shughour on Saturday, for the first time in the four year conflict. Syrian state media said the army had redeployed to the town's surroundings "to avoid civilian casualties". Opposition fighters and the Syrian Observatory for Human rights said that the town was now totally controlled by the insurgents. REUTERS/Ammar Abdullah