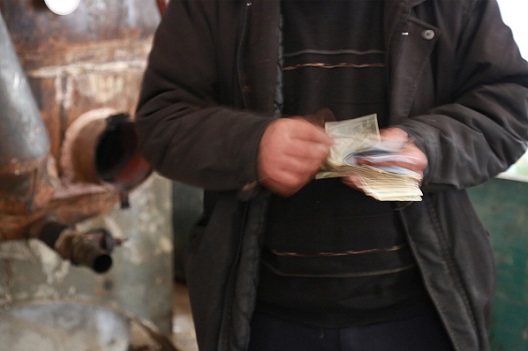 Photo: A man counts money inside a make-shift refinery in the Aleppo countryside January 13, 2015. Residents of Kafr Hamra, a town in the rural Aleppo countryside, refine crude oil in makeshift cottage refineries in warehouses and backyards for heating, operating bakeries and even running cars, just like most locals across rebel-held areas of Syria. The state no longer pumps gasoline to areas in rebel hands, and civilians have resorted to buying crude oil from armed groups who have taken over major oil producing areas in the east since 2012. Islamic State is currently in control of oil wells, and civilian middlemen now buy crude from the group before reselling it to locals, but the practice predates Islamic State's capture of oil wells from rival groups. REUTERS/Nour Kelze

The US-led coalition against ISIS based its strategy on two approaches. First, targeting the group leaders, headquarters, and barracks. Second, cutting off the group’s funding channels and key resources. The coalition targeted facilities in ISIS-controlled oil fields, but tried to avoid targeting wells and oil pipes. It launched an operation agasint the al-Omar oil field in Deir Ezzor, while simultaneously attempting to block smuggling points along Syrian-Turkish border. It supported the Kurdish People’s Protection Units (YPG), which managed to regain control of the cities of Kobani in January 2015 and Tal Abyad in June 2015. According to a map of coalition air strikes and the numbers of casualties, the strikes targeted ISIS supply convoys and supported the Kurdish forces against ISIS. The coalition has struck ISIS bases in cities and villages, but on a much smaller scale.

The Russian intervention that started on September 30 marked a shift in the coalition strategy in its war on ISIS, particularly with regard to besieging its financial resources. Targeting the surroundings of oil fields, oil refineries, oil convoys, supply lines, and smuggling routes is more extensive. The coalition imposed sanctions on parties purchasing oil from ISIS. It stepped up its support of the YPG, which is the core of Syrian Democratic Forces (SDF), to take northern Raqqa countryside, the Tishreen oil field in Hasaka countryside, and the Tishreen dam in eastern Aleppo countryside.

Oil and Gas
Oil and gas are key funding sources for ISIS. It sells oil for about $25-30 per barrel, generating more than $50 million for the group, according to Justice for Life in Deir Ezzor’s studies. ISIS was able to increase crude oil production from the fields under its control, after capturing them from Free Syrian Army forces. ISIS secured spare parts for the fields and pipelines, operated refineries, and linked some of the wells to pumps and invested in wells that the FSA had not used. The group controls the two most important gas producing factories Koniko and al-Shaddadi. It also controls a number of oil fields that also produce gas, which it sells to the Assad regime for operating power plants. ISIS sells gas tanks for $1.25 per tank.

Military operations against ISIS reduced production levels. Our study has shown some decline from the Koniko gas field, but we have not been able to collect data on Twainan and Hail.

Tables showing the decline in oil and gas production


Taxes and fees
The tax and tariff system levied by ISIS is an important pillar of the group’s economy. It exploits its control over the local trade in addition to the trade and transportation lines between Iraq and Syria under its control. It imposes a legal system based on Sharia law, which includes stiff fines, relating to religious violations such as smoking, being tardy to prayer, not abiding by “Islamic” attire, and not adhering to policies separating men and women. It also collects fees from merchants and craftsmen and for services such as water and electricity. Additionally, it makes use of the vast territory under its control in Iraq and Syria to collect customs fees on goods crossing in and out of its land. ISIS also runs informal monetary transfer offices for local money transfers by people living in the territories it controls. Because ISIS still has a relatively decentralized economy, the exact fees and taxes vary from area to area.

ISIS controls several archeological sites, chief amongst them Palmyra, in addition to the ancient sites in Deir Ezzor and Raqqa. ISIS conducts excavations in all the ancient sites under its control. However, there is little information on the revenue that the group earns, nor on the level of damage to these sites, because ISIS denies the local population access to these sites. However, it is known that ISIS established an antiquities bureau dedicated to controlling the archeological sites. People can submit a request to excavate a site, and the Antiquities Bureau will review and it and, if it approves it, issue a license to the applicant. Applicants must submit a fee with the initial application, and then ISIS receives %20-25 of the value of the findings.

Air strikes and military operations affected the economy of ISIS. However, the group is adjusting to the developments—it raised taxes and fines, and it has reduced the amount it spends on its fighters and their families. For example, no longer offers its fighters propane tanks as part of the aid they receive. It also cut their monthly pay by %25-50 over the last three months. The group is looking for new resources such as attempting to control Jazal oil field. It is also exploiting the situation to recruit people, capitalizing on the civilian casualties in international coalition, Russian, and regime air strikes and the eviction of Arabs by US backed Kurdish forces.

Justice for Life Observatory in Deir Ezzor is a Syrian NGO that produces reports about and documents events in Deir Ezzor. It works through a network of civil society activists in the province of Deir Ezzor.