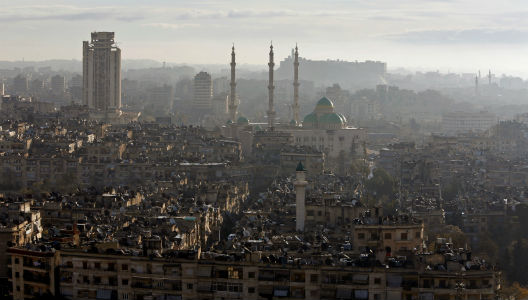 Editor’s note: This article is a personal piece from one of our regular contributors, Haid Haid. Though outside of SyriaSource’s normal analytical articles, it is important that those of us invested in the Syrian conflict—as observers, researchers, participants, or in any other capacity—remember that the war is brutal and every day there is a significant loss of life, much of which goes undocumented. This article is meant to serve as a reminder to our readers about this tragic reality, and spur us on to find a solution to the conflict.

I throw myself down on the couch. My body is shaking violently. I close my eyes in a desperate attempt to relax. A feeling of powerlessness overcomes me, and I make no effort to resist, instead letting my voice cry out. Surrender usually brings a strange feeling of comfort. Hours later, I am able to move again. I scatter my pain by reading a message from my sister informing me that I can call them now. I know that I will not be able to speak, but I pick up the phone and dial. I am crying again—making these strange sounds for the first time in more than two decades. The voice of my mother robs me of the ability to communicate in words. “Don’t cry,” my mother consoles me with words I don’t hear because of my sobbing.  After a few attempts, I am able to end the conversation. “I’ll take later, I’m not able to talk now.” I try to escape again by closing my eyes. After a few minutes, I succeed in stopping the trembling, if only for temporarily.

The alarm rings at eight-thirty in the morning. I pick up my phone and silence it with a routine movement. I look lazily at the screen. A person I do not know well has sent me a message. “Sorry for your loss. May the soul of your brother Ahmad rest in peace.” My chest begins to rise and fall rapidly. I re-read the message not believing what I am reading. With shaking hands, I manage to enter my brother’s name on my phone to confirm the message. The news is published on several individual’s Facebook pages, accompanied by a picture of my brother smiling. My brother has died.

Usually, I resort to sleeping or closing my eyes to escape from depression, sadness, and now death. It is said that crying often helps with sleep. Our neighbor used to hit her children so that they would sleep. I cried a lot, but couldn’t sleep. Perhaps our neighbor’s children’s fear of their mother continuing to hit them made them sleep. I should look for fear so I can sleep.

I look over some of the pictures my sister sent me. My brother’s eyes are closed. There are shrapnel fragments clearly visible on his face. I see a more severe injury on his right cheek. Perhaps it was caused by a bigger piece of shrapnel. I don’t know if it is still inside of him. His lips are blue despite the fact that he has only been dead for several hours. I do not know enough about death to know the reason his lips turned blue.

“As soon as I heard the sound of the ambulance, I knew in my heart it was Ahmad,” my mother told me over the phone. “I went beside him and put my cheek on his cheek. Oh, my eyes! His body was completely pierced by shrapnel. But I didn’t let the others see him.” My mother told me later that a mortar shell, or perhaps a tank, was the cause of his death. I try to imagine that scene to grasp the amount of sadness every member of my family feels, especially my mother, father, and brother’s wife. Sadness, like death, is imaginable, but not measureable.

I try to find other pictures of my brother on my phone. I did not find many as I don’t like to save pictures. I find a very short video that my brother sent me before he died. In it, he and his daughter Zeina, who isn’t more than four, are trying to beat one another to finish eating a piece of candy. My brother wins and, laughing, asks his daughter to kiss his right cheek, then he turns his left cheek asking for another kiss. I replay this clip over to hear the sound of his laughter. I prefer to laugh with my brother than to cry over him, but it seems that sadness, like evil, usually wins.

My brother and I are similar in that we avoid chit-chat, but my intermittent visits to Syria over the past few years allowed me to get to know different sides of his personality. I remember that one of the times he was ambushed by an army convoy, he began firing on a tank which was at the head of the convoy, so the tank fired on his position. Fortunately, the shell missed and just caused a wave of dust. Moments later, he discovered that the tank was not alone, but part of a convoy of tanks and armored vehicles. He grabbed his machine gun and began to fire at them. Fortunately, the convoy did not care about one crazy man trying to destroy their armored vehicles with bullets. I do not know much about weaponry except the death that follows it, but I was happy my brother survived that day.

My brother’s dissatisfaction with the opposition militant groups led him to leave the fight for a long period of time. But, despite that, he would fight in coordination with a group of his friends whenever the need arose. His final battle was “the great Battle of Aleppo” to break the siege of the city in which my sister lives. My other brother consoled himself by telling me that Ahmad was able to die the way that he wanted—defending his dream. He told me that it is less painful and more rewarding than him dying by a barrel bomb while sitting at home. My brother died because he was capable of dreaming. I repeated that refrain in my head hundreds of times. Except that death and dreamers do not change the realness or size of pain. Death and pain don’t care for logic.

Over the past few years, I have received a great many calls by which I have learned of my cousin’s kidnapping more than three years ago, and others informing me of the death of my brother, the death of my sister’s youngest son whom I had not yet met, and the death of many friends and relatives. Therefore, any sudden communication from my family is preceded by a certain amount of dread before I learn the reason for the call. This anxiety does not diminish with time or repetition. Like death, you cannot get used to anxiety.

Sometimes, I get asked about my feelings about the dangerous situation that my family lives under in the areas outside regime control in Aleppo. The regime’s systematic bombardment of civilians in these areas with every type of weapon increases the probability of one or all of my family members dying in an instant. Usually, I keep quiet for several moments, then reply that the situation terrifies me. There is no answer capable of summarizing my feelings toward waiting for the execution of my family’s death sentence, one I don’t even know the details of. I don’t know the cause of death, the person who will die, or the number of those who will die. The one thing which I do know is that every time I talk with my family could be the last time. There is no possibility of either accepting or refusing this situation. Such is our life now.