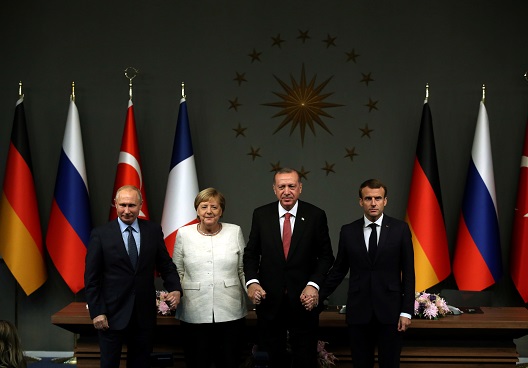 A summit held in Istanbul on Saturday failed to produce any breakthroughs in the core disagreements over the Syrian conflict. It did however have notable geopolitical implications that affect each of the four attendees Russia, Germany, and France, and Turkey – two of whom are new to an effort created to manage Russia and Turkish interests in Syria. Significantly, the United States took no part in the meeting despite the presence of two major European allies and NATO partner, Turkey.

The summit was on balance positive for Turkey and the ‘Astana’ peace track it has championed alongside Russia. The Astana track is essentially an alternative to the US-backed Geneva effort that eschews the latter’s stubborn insistence on political transition in Syria under ‘mutual consent’ (code for Assad’s departure). Astana aims to reconcile Russian and Turkish security interests in Syria. Yet it has lacked the legitimization of participation by European states, whom Russia and to a lesser degree Turkey view as a key source of reconstruction funding for Syria. The very attendance of Germany and France is therefore significant and a win for both Turkey and Russia. The United States however seeks to keep its European partners firmly in the Geneva camp.

Turkey also benefits from German and French endorsement for preserving a shaky status quo in the Syrian border province of Idlib. A Syrian regime assault on this area was narrowly avoided due to a Russian-Turkish deal to establish a de-escalation zone (contrary to regime preference). The European states and Turkey share an interest in blocking another offensive that would displace hundreds of thousands more refugees into their territories (indeed there was consensus on the importance of allowing refugees to return to Syria at the Summit). Given Russia’s pursuit of European goodwill, French and German participation may grant Turkey additional leverage in ensuring that Russia upholds the Idlib agreement, and vice versa.

The French and German attendance was somewhat odd however in that both countries clung to positions derived from the Geneva track, namely: refusal to cater to Russian demands for reconstruction money absent a credible political transition in Syria; and the related insistence on free and fair elections. Also noteworthy was their endorsing a statement to reject ‘separatist’ (read Kurdish nationalist) agendas in Syria, even though the main partner in the anti-ISIS coalition supported by France and Germany is the Kurdish Democratic Union Party (PYD) which seeks Kurdish autonomy. This is a rhetorical concession to Turkey and Russia, who use this as a standard political line, despite Moscow having cordial (if cold) relations with Syria’s Kurds.

Equally significant was the US absence. The US position on diplomacy over Syria is that reconstruction funding and military withdrawal are conditional on substantial regime, Russian, and Iranian concessions that have no place in the Astana framework. Even the most minute progress or legitimization in the Astana effort marginalizes an already weak US-backed Geneva process.

The Istanbul summit therefore benefited Turkey, revealed contradictions in the French and German positions, and presented an annoyance to US diplomatic strategy. What it did not do was make progress in resolving the Syrian conflict, locally or internationally. For one, no Syrian parties attended. Seeing as the opposition rejects the constitutional negotiation process endorsed at the summit and the regime rejects all political compromise (in addition to a permanent freeze in hostilities in Idlib) it stands to reason that whatever was decided in Istanbul cannot resolve the conflict’s core issues.

There is also no consensus over the fate of Idlib, how exactly refugees will return to Syria, whether the regime should make political concessions, what role Iran should play in Syria, and under what conditions should reconstruction funding be made available. France and Germany continue to hope that Russia will pressure the regime to make political concessions, though Russia showed no intention of doing so at the summit. In other words, there was no movement toward resolving the core obstacles to the Syrian civil war or its secondary crises. It will take far more than a summit in Istanbul to accomplish that, especially if the superpower with thousands of its troops deployed in Syria is absent.

Aaron Stein is a resident senior fellow at the Atlantic Council’s Rafik Hariri Center for the Middle East. Follow him on Twitter: @aaronstein1.

Faysal Itani is a resident senior fellow at the Atlantic Council’s Rafik Hariri Center for the Middle East. Follow him on Twitter: @faysalitani.