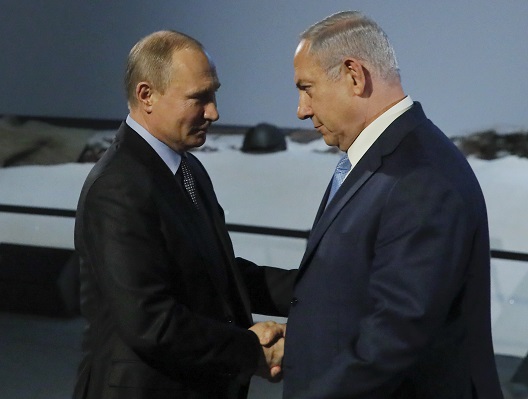 The latest Israeli airstrike on the T4 airbase and the possibility of Russia providing Damascus with an S-300 missile system have strained relations between Moscow and Tel Aviv. But these developments are unlikely to break down this strategic partnership or spark further escalation.

Tensions are increasing between Russia and Israel over Syria, casting a shadow on a strategic partnership built on deconflicting the nation’s crowded and complex battlefield. However, experts say the countries’ relationship remains solid enough for now.

Breaking with convention, Russia named Israel as the suspected perpetrator of the April 9 attack on the T4 Airbase, a Syrian air force installation in Homs province, and publicly complained that it had not been warned of the strike beforehand. Russian foreign minister Sergei Lavrov described the incident as a “very dangerous development.”

Ties became increasingly strained earlier this week after Russia said it may provide the Syrian government with an advanced anti-aircraft missile system that could potentially hinder Israel’s aerial capability totarget arms shipments to Iranian-backed groups in Syria. Moscow has yet to issue a definitive decision on the issue, but Israeli defense minister Avigdor Lieberman warned that his country would strike at the anti-aircraft missile systems if they fired on Israeli targets.

While the latest developments signal increasing tension between Moscow and Tel Aviv, they are unlikely to prompt a dramatic change in relations or lead to a major escalation in the war, experts told Syria Deeply. They believe common strategic interests and a shared desire for de-escalation will likely contain the possibility of flare-ups.

“[Recent developments] are certainly a big irritant to Russian-Israeli relations, but I don’t think that will become a game changer in terms of their ties in general,” said Alexey Khlebnikov, a Middle East expert at the Russian International Affairs Council (RIAC). “Both countries are more interested in maintaining their current level and intensity of relations on all levels, rather than undermining that.”

Remarks by Russia’s ambassador to Israel on Wednesday also seem to suggest business as usual between the two states in Syria. “We are mutually coordinating and updating about Syria … So far, there have been no incidents between us, nor even hints at incidents, and I hope there will not be,” Alexander Shein said.

When Moscow officially intervened in the Syrian conflict on behalf of President Bashar al-Assad in 2015, the question of how this deployment would affect Russian-Israeli ties became urgent. The intervention concerned Israeli officials, who wanted assurances that Moscow’s deployment would not challenge one of Tel Aviv’s main objectives in Syria: containing the expansion of Iran and its proxy groups

However, Israeli and Russian leaders made a surprisingly amicable press appearance in September 2015 during which they vaguely agreed to cooperate. Russian president Vladimir Putin told reporters he would work with the Israeli premier Benjamin Netanyahu to “prevent misunderstandings between Israel Defense Forces units and Russian forces.”

Netanyahu, for his part, stated that he and Putin had “agreed on a mechanism to prevent such misunderstandings.” This mechanismincludes an ongoing deconfliction hotline between IDF headquarters in Tel Aviv and Russia’s Hmeimim airbase in Syria, a direct line of communication between Israeli and Russian deputy chiefs of staff, and regular consultations between their defense establishments.

In practice, this has meant that Moscow turns a blind eye to Israeli strikes on Iranian and Syrian government positions as long as the maneuvers do not endanger Russian personnel on the ground.

Ofer Zaltzberg, one of the researchers of an International Crisis Group report entitled “Israel, Hizbollah and Iran: Preventing Another War in Syria,” cites an incident where the Israelis were scolded by Russian diplomats, not for violating Syrian airspace or hitting Hezbollah, but for doing so in close proximity to Russian forces.

“Russia knew how to scold Israel’s ambassador in March last year when Israel hit a target near the city of Palmyra that Moscow did not approve of,” he told Syria Deeply. “Israeli officials told Crisis Group this was because there were Russian forces near that area and that Israel rapidly apologized for that.”

Russia also seems to expect prior warning from Israel of any strikes carried out as part of the de-confliction arrangement between the two states. This became clear when Moscow took issue with not being informed beforehand of the April 9 strike on the T4 airbase.

Despite periodic diplomatic stand-offs, Russia and Israel have largely been able to sustain close military coordination and a common respect for such rules of engagement throughout the course of the conflict.

“[Israel and Russia] have this agreement to prevent any infractions.They [both] have this goal of preventing a major escalation,” says Evgeny Finkel, an assistant professor of political science and international affairs at George Washington University.

“There is pretty serious coordination between the Russian and the Israeli militaries, and they are both interested in preventing confrontations with each other.”

According to Finkel, this is partly because the two states share a number of common strategic interests despite supporting opposite alliances in Syria.

Israel has regularly expressed hostility towards Assad but it is not in Tel Aviv’s interest to see Syria unraveled by militant forces, Finkel said.

“An ISIS or an al-Qaida governed state in Syria or a complete disintegration of Syria would be a worst-case scenario for Israel. In that sense, Russian and Israeli goals can co-exist,” he added.

Both states are also keen on preventing a spill-over of the Syrian conflict to neighboring Israel, according to the GWU professor. “Russians are quite interested in containing what’s going on in Syria to Syria,” he said, explaining that this is a primary concern for Israel.

Russia’s good relations with Iran, Hezbollah, and the Syrian government also make it the only actor capable of mediating between Tehran and Tel Aviv. It remains unclear whether Moscow is willing to take on such a role. But when Syrian pro-government forces downed an Israeli fighter jet in February, Russia appeared to be the only entity capable of preventing both Israel and Iran from sparking further escalation.

The April 9 strike on the T4 airbase is only of many of Israeli attacks that have targeted Syria in recent years. Like previous ones, it is unlikely to solicit any serious Russian military response, according to Khlebnikov of the RIAC.

“We need to remember that Israel’s history of military strikes on Syria is quite lengthy,” he said, explaining that Russia had “done nothing” in the past in response to such attacks.

Despite Israeli threats to strike at the anti-aircraft defense systems, Khlebnikov said that Tel Aviv is unlikely to carry out any attacks directly threatening Russian servicemen.

“The risks that any attack on some mis-coordinated targets could potentially inflict damage or loss of life of Russian military personnel would be a total game changer,” he said. “I believe that the military, the leadership on both sides involved, they understand that. I don’t think they are ready to test the water that far.”

Patrick Hilsman currently works for Transterra media and is a contributor to Syria Deeply. Patrick graduated from Columbia University where he studied Political Science. He recently appeared on BBC from Aleppo as a Syria Deeply contributor.

This article originally appeared on Syria Deeply. You can find the original here. For important news about the war in Syria, you can sign up to the Syria Deeply email list.

Image: Photo: Russian President Vladimir Putin and Israeli Prime Minister Benjamin Netanyahu shake hands as they attend an event marking the International Holocaust Victims Remembrance Day and the 75th anniversary of the breakthrough the Nazi Siege of Leningrad in the World War II, at the Jewish Museum and Tolerance Centre in Moscow, Russia January 29, 2018. REUTERS/Maxim Shemetov